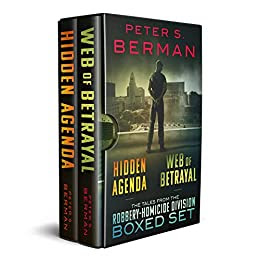 HIDDEN AGENDA - Jeremy Hart, and LA District Attorney, is a young widower whose grief counselor sends him to a charity party to jump-start his social life. At the party, he meets Claire Carleton, a married woman who is trapped in a loveless marriage with Peter Carleton, a wealthy, abusive husband. A courtship develops, but when Peter discovers the affair, Claire confides to Jeremy that she believes her husband is planning to kill her. When Pete Carleton is subsequently found shot to death in the driveway of his Bel Air home, Detectives Jennifer Donahue and Ulysses Gibson are called upon to solve the case, and when the evidence point to Jeremy Hart as the killer he is arrested and quickly taken to trial. What follows is a search for the true story behind the killing, and the detectives find themselves struggling to keep the scales of justice in balance as they uncover more than one Hidden Agenda. This is an intense thriller where everything is in doubt until the end.WEB OF BETRAYAL -When a British SAS officer is assassinated in Los Angeles by a member of an IRA splinter group, it is up to District Attorney Renee Marin to prosecute the killer. But before the proceedings can begin, Marin and Detectives Jennifer Donahue and Ulysses Gibson are confronted by a series of terrorist murders designed to force the release of the assassin. With the assistance of SAD Major Andrew Whitney, they find themselves caught up in a desperate race against time to unravel a series of betrayals and secret alliances that reach into the very highest levels of government. This thriller deals with the very real problem of negotiating with terrorists.

Tales from the Robbery-Homicide Division is a boxed set of two legal thrillers, one a domestic case and the other diving into the world of terrorism. The detectives are the same in both books, but of course, the cases are vastly different as are the characters central to those cases. Both books had things I liked and things I didn't, but both are certainly interesting stories. The first book, Hidden Agenda, is absolutely brilliantly plotted as far as the who, what, where, and why, and I loved the way things happened in the conclusion. That said, there is considerable time building up to the crime, and then the story gets bogged down in the middle. The second, Web of Betrayal does have a faster pace, and it's certainly a relevant topic in this day and age, but I had trouble getting into it at first. I feel like both books were stretched out a little further than necessary, but in the end, they were both well worth the reading time. I would say anyone who enjoys a procedural thriller will like this boxset.