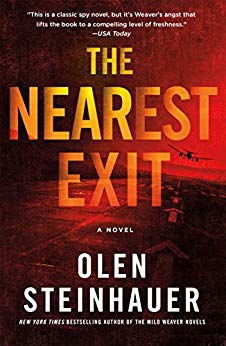 Milo Weaver has nowhere to turn but back to the CIA in Olen Steinhauer's brilliant follow-up to the New York Times bestselling espionage novel The Tourist
The Tourist, Steinhauer's first contemporary novel after his awardwinning historical series, was a runaway hit, spending three weeks on the New York Times bestseller list and garnering rave reviews from critics.
Now faced with the end of his quiet, settled life, reluctant spy Milo Weaver has no choice but to turn back to his old job as a "tourist." Before he can get back to the CIA's dirty work, he has to prove his loyalty to his new bosses, who know little of Milo's background and less about who is really pulling the strings in the government above the Department of Tourism—or in the outside world, which is beginning to believe the legend of its existence. Milo is suddenly in a dangerous position, between right and wrong, between powerful self-interested men, between patriots and traitors—especially as a man who has nothing left to lose.

After reading the first Milo Weaver book, I quickly jumped into this one. My hope was that the author was finding his footing and laying the groundwork for a compelling spy series and things would pick up with this book. Instead, I found more of the same, loads of lengthy dialogue, repetitiveness, and bits of action followed by page after page of slow-moving story. The story has great potential but seems to always stay just this side of the compelling read that it could be. I'm two for two now on this series that can't seem to cross over into something memorable, something that would make me want to continue on. As it stands, I'm on the fence about the series and its main character, so I think I'll be taking a break before considering the next Milo Weaver story. 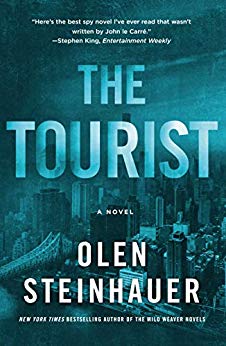 Milo Weaver used to be a "tourist" for the CIA—an undercover agent with no home, no identity—but he's since retired from the field to become a middle-level manager at the CIA's New York headquarters. He's acquired a wife, a daughter, and a brownstone in Brooklyn, and he's tried to leave his old life of secrets and lies behind. However, when the arrest of a long-sought-after assassin sets off an investigation into one of Milo's oldest colleagues and exposes new layers of intrigue in his old cases, he has no choice but to go back undercover and find out who's holding the strings once and for all.
In The Tourist, Olen Steinhauer---twice nominated for an Edgar Award---tackles an intricate story of betrayal and manipulation, loyalty and risk in an utterly compelling novel that is both thoroughly modern and yet also reminiscent of the espionage genre's luminaries: Len Deighton, Graham Greene, and John LeCarré.

It's been quite a while since I've curled up with a spy novel, so maybe I'm out of the loop on the genre, but The Tourist left me somewhere in the fair to midland range. There's a lot of dialogue and the story is repetitive at times, plus there are several things that seem to rely on everyone, including Milo, being either oblivious or not very bright, both of which seem out of sorts with a spy novel. In the end, The Tourist left me wanting more - more action, more intrigue, more tension, just more. It isn't a bad story, but it isn't a particularly great one either.

Mallory’s magi gifts send her north into the province where almost all the magi were killed. If anyone discovers she is a magi, her life is in peril. But she must go where her gifts send her. A boy needs her help or he will die.

Leland, Pintra, Faolan, Jadan, Ovra, and Erga travel from Scons province to Lins to seek a magi master. In a small village Jadan gets separated and is accused of theft. Without Mallory’s help, the angry mob will kill him. Mallory steps in, uses her gifts to save him but exposes herself as a magi.

The seven escape the angry village and hide out in caves. When Jadan’s injuries turn deadly, Mallory is forced to use her gifts, exposing herself to the group of strangers she doesn’t trust. Is she the magi master they’ve been looking for or will they turn her in for the bounty?

Tensions rise between the leaders of Linos and Scons. Linos increases their soldiers at the border. War looms on the horizon.

Refugees flee from hunters into Scons. Garlen wants to protect them but prophecy warns of danger and betrayal.

Garlen sets aside his lingering distrust of magic and Mallory to protect his new daughter, Arial and his province.

Family - is it those you’re born to or those you love? Mallory meets her blood family. Anger clouds her judgement. Will her emotions cause harm to the family of her heart?

Standing at the top of the steps at the manor house, Benson whispered to Brielle, “We can’t tell either of them about this.”
“No,” Brielle said. “Mother will tell him, and he won’t approve.”
“Do you think mother and Bennett will know about all this energy,” Benson asked.
“We have to be cautious,” Brielle said
“Did you feel the power,” Benson asked as they descended the steps.
“It’s amazing,” Brielle said. “Bennett will punish us if he finds out.”
“We’ll be careful,” Benson said squeezing her hand. “I can’t wait for lunch.”
I hope they let me go,” Brielle said gnawing on her lower lip. They approached the gate and nodded to the guard as they passed through.
“They’re greedy for more information about the house,” Benson said.
“But then we actually have to tell them about the house,” Brielle said. They considered the problem as they walked in silence for a block.
“You tell them about where we were tonight,” Benson said. “When I get home tomorrow, I’ll tell them where we ate but nothing else.”
“Little bits,” Brielle said. “With nothing important.”
“It’s not like they’re going to invite us to their private rooms,” Benson said.
“It might work,” Brielle said.
“He’ll let you go if you give him the information tonight,” Benson said.
“I don’t want her hurt or to betray her,” Brielle said.
“Should we tell her,” Benson asked stopping to face her.
“I don’t know,” Brielle said. “I’ve saved some credits but not enough to get away.”
“My credits are hidden in the barn,” Benson said. “They don’t know how much I make so Bennett only gets half my wages.” Stopping suddenly, he covered his cheeks as red rushed to them and he felt a surge of energy rush through him.
Brielle pushed him into an alley. “Breathe,” she said. “Breathe and control your emotions and your energy.” She coaxed him by mimicking what Mallory taught them.
Fighter, the alley cat, rubbed on Benson’s legs as he took long minutes to lean on Brielle and take deep breaths. Bending down to stroke the alley cat, Benson said, “I hate feeling helpless.” Squatting in the alley, he petted the cat as the cat twined around him mrowing.
Putting her hand on his shoulder, Brielle said, “Me too. We’ll get through this.”
“We better get back,” Benson said as the cat wandered away. He felt a dread wash over him as he stood to return to the cottage.

From poetry to novel, I enjoy telling a good story or expressing a heartfelt emotion. I've been published in Circle Magazine, The American Tarot Association's Quarterly Journal, What's Cooking America, Children, Churches and Daddies, placed second in Words of Women 2010 Writing Contest, 2012 Daily Flash, and The Deadman's Tome. I have a bachelor's degree in business and a second bachelor's degree in English Professional Writing and Book Editing. On the side, I have a small editing business. In addition to my work, I love to read, crochet, crafting, research genealogy, and spend time with family. I have three adult daughters and have been married to my husband for over 30 years. I'm the proud grandma of three fur babies - my daughters' cats.