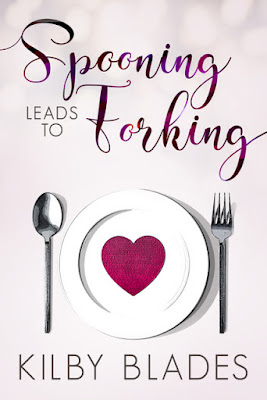 Series: Hot in the Kitchen #2

Synopsis for Spooning leads to Forking:

Leaving her name—and her job as a top food critic—behind in New York, Shea Summers seeks respite in Sapling. Her borrowed mountain getaway seems perfect for writing her opus. It’s also perfect for riding out a messy divorce and hiding the roomful of cash she kind-of-sort-of stole from her ex.
Too bad Sapling is a remote, three-restaurant town with food that leaves much to be desired. Sexy grocer, Dev Kingston, may be Shea’s saving grace. The way he looks at her with his aspen-green eyes shows her everything her marriage was missing, and he can special-order every delicacy she craves.
But Shea’s not the only one who isn’t what she seems. Dev moonlights as a sheriff’s deputy, a fact she finds out too late; a string of suspicious crimes finds newcomers under scrutiny; and her ex is going to extremes to find out where she is.

Taking the money and living under an assumed name might be on the right side of wrong, but dating Dev is a dangerous game. She's still running and he's still the law.

Dev Kingston has some nerve, Shea said to herself rather unreasonably. She’d been mentally cursing the man all morning. He was utterly responsible for her lack of concentration. Maybe some of the blame ought to be put on Delilah, whose abrupt disappearance the night before had perpetrated events that left Shea and Dev alone in his car.

Even before last night, Shea had struggled to remain impervious to his charm. Seeing him with Evie had done nothing to diminish his appeal. There were few things more attractive than a man who doted on his momma. Then, to be in his car, surrounded by a cocoon of his citrusy, spicy aroma had made Shea ache to do spicy things.

Don’t forget the arm squeeze, sex-starved Shea reminded reasonable Shea, as if any version of Shea could forget. It was the least-perfunctory cheek kiss she’d ever received. His big hand had cuffed her upper arm firmly. His green eyes had narrowed slightly, telegraphing something complex before warm lips delivered a too-brief kiss to her cheek.

A wave of his delectable scent had filled her senses as soon as he’d pulled back and she might have leant forward just a bit—her nose’s attempt to follow. She might’ve taken it farther, trailing said nose up the column of his beautiful neck, if his voice hadn’t broken the spell, speaking a deep, “Good night.”

“Hey—do you have any sumac?” she asked, circling back to the front after looking for the herb herself. She’d become convinced that a little sumac was the perfect addition to the aioli they served with the calamari at The Big Spoon. Sapling had exactly three restaurants: Delilah’s served sweet and savory pastries. Gator’s Sports Bar had pub food and wings. The Big Spoon served breakfast, lunch and dinner had the largest menu of them all.

“Sumac is edible?” Dev looked up from shuffling his papers, looking a bit surprised.

She frowned. “What else would it be?”

“Poisonous,” Dev picked up his green juice cup again. “Worse than poison ivy, but not as bad as poison oak. Poison sumac’ll give you a rash all over your body.”

“Huh,” Shea tutted. “Well, it’s a spice, too. I’ve never seen it in the wild, but the flower is a deep red. It’s actually kind of beautiful.”

Then, Dev did that thing he did whenever they got to talking. He got quiet for a minute, but never broke their gaze. In moments like that, he had this way of looking at her that made her feel like he was right up in her space, rather than all the way across the room.

“Sounds like you want it?” his lips settled into a half-smile. The full smile, she’d noticed was for genuine amusement. The half-smile seemed to mean something else. It held a different sort of softness too intimate to have a name.

“If you can get it…” Her voice held shyness and hope and all the other complex tones she’d forgotten her voice could make. The thrill of possibility was a heady thing. She felt it in spades every time she talked to Dev.

“How much do you need?” he wanted to know, shifting his weight to lean against the counter with one hip.

“I guess a single bottle is fine.”

The warmth in his eyes lingered even as the set of his lips changed. “I can get you sumac.”

What else can you get me?

Shea came close to saying it out loud. Her face heated, not so much in a blush of embarrassment as in a flush of lust. With Dev, lust flushes had become a thing. Nodding her thanks, she walked off before she could pounce on the man. With every visit, she wanted to a little bit more. Her life was still too messy for all of that. But she had willpower. Discipline. She could be patient and methodical until whatever wanted to happen was meant to be, just as she’d been patient and methodical in plotting her divorce.

Kilby Blades is a 45-time-award-winning author of Romance and Women's Fiction. Her debut novel, Snapdragon, was a HOLT Medallion finalist, a Publisher’s Weekly Book Life Prize Semi-Finalist, and an IPPY Award medalist. Kilby was honored with an RSJ Emma Award for Best Debut Author in 2018 and has been lauded by critics for “easing feminism and equality into her novels” (IndieReader) and “writing characters who complement each other like a fine wine does a good meal” (Publisher’s Weekly).

When she's not writing, Kilby goes to movie matinees alone, where she eats Chocolate Pocky and buttered popcorn and usually smuggles in not-a-little-bit of red wine. She procrastinates from the difficult process of writing by oversharing on Facebook and Instagram and giving away cool stuff related to her fiction novels to her newsletter subscribers.

Win an amazing gift basket or a signed paperback copy of Spooning leads to Forking by Kilby Blades: