The Vacation
by T. M. Logan 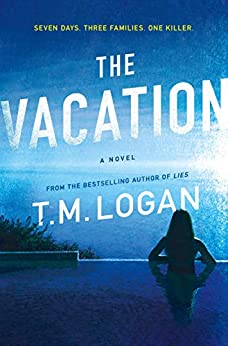 In The Vacation, a captivating thriller from T. M. Logan, the bestselling author of Lies and 29 Seconds, four best friends on a dream vacation come face-to-face with an explosive secret.

It was supposed to be the perfect getaway: Kate and her three best friends, spending a week with their families in a luxurious villa in the south of France. Through the decades they’ve stayed closer than ever, and seven days of drinking crisp French wine and laying out under the dazzling Mediterranean sun is the perfect celebration of their friendship. But soon after arriving, Kate discovers an incriminating text on her husband’s cell phone.

A text revealing that he’s having an affair.

And that the other woman is one of her best friends.

Trapped in paradise with no one to trust, Kate is determined to find out who has put her marriage―and a lifelong friendship―in jeopardy. But as she closes in on the truth, she realizes that the stakes are higher than she ever imagined. Everyone on the trip has secrets…and someone may be prepared to kill to keep theirs hidden.

Momma Says: 3 stars⭐⭐⭐
The Vacation is a domestic drama with plenty of secrets to build a fair amount of suspense. The story is told primarily from Kate's point of view, and I'll be honest - she kind of got on my nerves a time or two. I think part of that is because I'm the type that would've confronted the husband immediately rather than spending the week uncovering secrets. Of course, that wouldn't have made for much of a book, and the secrets did keep things interesting enough for me to keep the pages turning. TM Logan does create characters that make a reader want to see how things play out for them. This one is well written and certainly entertaining, but it's a little more drama than suspense in my opinion.
❃❃ARC provided by NetGalley and St. Martin's Press