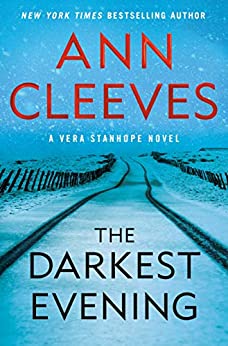 On the first snowy night of winter, Detective Inspector Vera Stanhope sets off for her home in the hills. Though the road is familiar, she misses a turning and soon becomes lost and disorientated. A car has skidded off the narrow road in front of her, its door left open, and she stops to help. There is no driver to be seen, so Vera assumes that the owner has gone to find help. But a cry calls her back: a toddler is strapped in the back seat.Vera takes the child and, driving on, she arrives at a place she knows well. Brockburn is a large, grand house in the wilds of Northumberland, now a little shabby and run down. It’s also where her father, Hector, grew up. Inside, there’s a party in full swing: music, Christmas lights and laughter. Outside, unbeknownst to the revelers, a woman lies dead in the snow.As the blizzard traps the group deep in the freezing Northumberland countryside, Brockburn begins to give up its secrets, and as Vera digs deeper into her investigation, she also begins to uncover her family’s complicated past.

Momma Says: 2 stars⭐⭐
This is the second Ann Cleeves book that I've read, each in a different series, and I think it's safe to say she is just not the author for me. This is a police procedural so I expect a good deal of time to be spent on procedure - investigating the crime, interviewing suspects, that sort of thing. The problem is what could have been a reasonably interesting investigation gets lost in overly wordy descriptions that seem to do little more than fill pages. Then there's Vera. Now, I'll admit that this is the first Vera Stanhope book I've read, so maybe I would've learned something in those earlier books to change my mind, but I did not like Vera at all. She comes across as rude more often than not, which makes it hard to warm up to her, so even if I had liked the story, that lack of connection with Vera wouldn't bode well for me reading any other books in this series.
❃❃ARC provided by NetGalley and St. Martin's Press