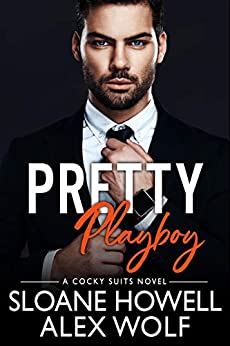 He wants her. She hates him.

Penn Hargrove is a playboy.

He goes through women so fast he doesn’t remember their names.

Until he sees her…

The first time she glares at him, he knows there’s more behind those light blue eyes and sassy mouth.

He wants her in his bed. She wants to kill him, more than once.

He’s relentless in his pursuit.

He won’t stop until he has her.

When she finally gives in, crushing secrets are revealed that threaten to rip them apart at the seams.

When the smoke clears, one question remains…

Will they sail off into the sunset, or sink in the wake?

Pretty Playboy was a little bittersweet for me at first. I knew going in that this was supposed to be the last in the series, and it was kind of sad to think about saying goodbye. Fortunately, I can go back and revisit these fabulous couples from time to time.
And with that, we'll move on to Penn and Campbell. These two start out with an enemies to lovers vibe - that lasts about a hot minute. There are many things these authors have done very well through this series, but a couple of those things always stand out: banter and sexual chemistry. Both are positively brilliant between this couple, and the more they banter, the thicker the sexual tension gets. You just can't read this one without wanting these two together. Of course, there's a bit of angst, and the Collins romance expert has to step in, but like always, Sloane and Alex take us where we want to go.
Finally, we come to the series epilogue, which I can't really go on about without spoiling it. So, I'll just say it was emotional. I'm not gonna go into what kind of emotions, but definitely emotional. This series has been nothing short of terrific from the very first page of the very first book. If you've read any of it, you know what I'm talking about. If you haven't - What are you waiting for? It's a whole series of must-reads with characters you just can't get enough of.