✱✱Book Review✱✱ To Sir, with Love by Lauren Layne 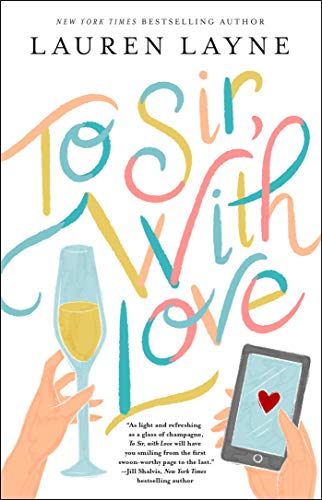 Love Is Blind meets You’ve Got Mail in this laugh-out-loud romantic comedy following two thirty-somethings who meet on a blind dating app—only to realize that their online chemistry is nothing compared to their offline rivalry.Perpetually cheerful and eager to please, Gracie Cooper strives to make the best out of every situation. So when her father dies just months after a lung cancer diagnosis, she sets aside her dreams of pursuing her passion for art to take over his Midtown Manhattan champagne shop. She soon finds out that the store’s profit margins are being squeezed perilously tight, and complicating matters further, a giant corporation headed by the impossibly handsome, but irritatingly arrogant Sebastian Andrews is proposing a buyout. But Gracie can’t bear the thought of throwing away her father’s dream like she did her own.Overwhelmed and not wanting to admit to her friends or family that she’s having second thoughts about the shop, Gracie seeks advice and solace from someone she’s never met—the faceless “Sir”, with whom she connected on a blind dating app where matches get to know each other through messages and common interests before exchanging real names or photos.But although Gracie finds herself slowly falling for Sir online, she has no idea she’s already met him in real life…and they can’t stand each other.

Momma Says: 3 stars⭐⭐⭐
To Sir, with Love is Lauren Layne's modern-day take on You've Got Mail, and it is a cute story, but it took some time for me to get into it. The first half moved a little too slowly for me with the exception of the messages between Sir and Lady. The messages between them were some of my favorite parts of the book and what kept me turning pages through the first half. That's not to say I didn't like the story. Once things picked up, I enjoyed the banter between Sebastian and Gracie, but I never really felt the chemistry between them that I expected. To me, they were a much better couple as Sir and Lady, and I realize that they were the same people (considering the blurb and inspiration for this book, I don't think I'm giving too much away there) - anyway, I'm not sure how to explain it, but it just felt different. I think I needed more of Sebastian and Sir. Sebastian is a great character, but I really wanted his side of things. I also wanted more of the banter between them. It's rather short-lived and one-sided after that first meeting. What it comes down to is this one was a cute and sweet little romance. I enjoyed it enough to say it was worth the read, but it didn't quite live up to my expectations.