Behind the Veil by E. J. Dawson Virtual Book Tour 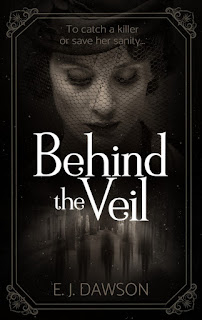 Behind the Veil
E. J. Dawson
Genre: Gothic Suspense
Publisher: Literary Wanderlust
Date of Publication: 1st October 2021
ISBN: 9781942856931
ASIN: B0981C89JL
Number of pages: 252
Word Count: 86k
Cover Artist: Violeta Nedkova
Tagline: To catch a killer or save her sanity
Book Description:
Can she keep the secrets of her past to rescue a girl tormented by a ghost?
In 1920s Los Angeles, Letitia Hawking reads the veil between life and death. A scrying bowl allows her to experience the final moments of the deceased. She brings closure to grief-stricken war widows and mourning families.
For Letitia, it is a penance. She knows no such peace.
For Alasdair Driscoll, it may be the only way to save his niece, Finola, from her growing night terrors. But when Letitia sees a shadowy figure attached to the household, it rouses old fears of her unspeakable past in England.
When a man comes to her about his missing daughter, the third girl to go missing in as many months, Letitia can’t help him when she can’t see who’s taken them.
As a darkness haunts Letitia’s vision, she may not be given a choice in helping the determined Mr Driscoll, or stop herself falling in love with him. But to do so risks a part of herself she locked away, and to release it may cost Letitia her sanity and her heart.
Book Trailer: https://youtu.be/zNYlZ7PatA0
Amazon     BN     Book Depository

“I will study the picture and book,” Letitia said, not about to let him fall into his grief and worry. “I’d like to ask that you don’t speak during this time. One of the things I’ll be able to offer if I see her is something only you would know about her. That you come by reference is flattering, but I find everyone has a measure of doubt. This session is to affirm in your mind I can do as I promise.”

“What would that be?” Mr. Barkley asked.

“That should Maisie have passed, and it wasn’t violent, I can share her final moments with you.” Letitia pitched her voice low and soft to lessen the distress her words may cause. Mr. Barkley grimaced and closed his eyes as she continued. “I will not tell you if someone murdered her, Mr. Barkley. I cannot do that. Often the victim is taken by surprise, and this can drag me into death with them. I will at least be able to give you some measure of closure, simply by reading what I can of Maisie’s things.”

His eyes cracked open though the grim features didn’t change. “Thank you.”

She took off her gloves and picked up the picture. It was the same one she’d seen in the newspapers. A girl of eleven, hair in pigtails, grinning at the camera.

Letitia focused on her eyes. The liveliness there was a dim and distant echo compared to actual life. She let her gaze soften, imagining what the girl would be like, letting her ability paint a picture of Maisie. This would be one of many photographs. She had laughed too much in the others. Letitia put it down and picked up the book.

It didn’t belong to Maisie.

The knowledge was as instinctual as breathing. Letitia embraced it, bending it to her will.

“This isn’t her book,” Letitia said, setting it down and looking to Mr. Barkley. “It belonged to someone else, a much older woman…her mother?”

“Died six years ago of tuberculosis,” he said, “and almost took Maisie, too.”

Letitia nodded, turning the pages, feeling the love in the paper under her fingers, and opening to a white satin ribbon inside. As soon as Letitia touched it, darkness overwhelmed her.

There was a fall, and she was tumbling down a long shaft, no light, only the reek of brine and rot.

Letitia yanked her hand back as though stung by a bee. She shook it, the prickle on her fingers stinging into her hand. Rubbing away the pain, she looked to Mr. Barkley.

“That belonged to Maisie,” she said. “It was her christening ribbon.”

“Not quite,” Letitia said, “but let me try again.”

He fell silent and Letitia used the book to slide the ribbon onto the table in front of her without touching it. It was grubby in some places, fraying at one end, and it was these teased tassels Letitia reached for, this time ready for the images she received.

Maisie was curled next to her mother on a big bed, playing with the ribbon as her mother read, content to lie next to her in the firelit room. Her father came over, picked her up and took her to bed, but she took the ribbon with her.

Years later, she still had it, held it tight in her hand, wrapped between her fingers, while she stood by her father’s side at the funeral of her mother. Her friend Tommy waved at her across the church, but Maisie didn’t wave back. Today was not a day to be happy.

Maisie threaded the ribbon through her mother’s book and kept it by her bedside. Though she never read the pages, she sat up and flipped them like her mother had, eyes lost to memory, her fingers plucking at the thread of the ribbon.

Letitia stretched her mind for what was beyond, but while she was sure the girl was dead, there was no sense of her beyond death. It didn’t take much to imagine why the little girl was taken and what might have happened to her. Letitia drew back before the lingering soul would become aware she sought it out.

As much as Letitia wanted to tell him more, there was nothing else to see without scrying. Short of going into a trance, she wouldn’t be able to see anything but Maisie’s final hours, which wouldn’t help Maisie, her father, or Letitia.

And Letitia had a grave fear the girl had not passed the veil. Maisie was on the wrong side of death.

About the Author:
Beginning a writing journey with an epic 21 book series, Ejay started her author career in 2014 and has taken on the ups and downs of self-publishing with her fantasy series The Last Prophecy since 2016. At the start of 2019, she put the series on the backburner to write Behind the Veil in 25 days, and signed a publishing contract for the gothic noir novel to independent publisher Literary Wanderlust. Behind the Veil is set for release on the October 1st 2021. She resumed self-publishing a scifi series, Queen of Spades released across 2020 and 2021, as well as signing another contract with Literary Wanderlust for NA fantasy, Echo of the Evercry. Believing in more than one path to a career in publishing, Ejay pursues self-publishing alongside querying traditional publishers with multiple manuscripts.
https://ejdawson.com/
https://www.instagram.com/ejndawson/
https://twitter.com/ejdawsonauthor
https://www.facebook.com/ejdawsonauthor
https://www.goodreads.com/author/show/14845831.E_J_Dawson 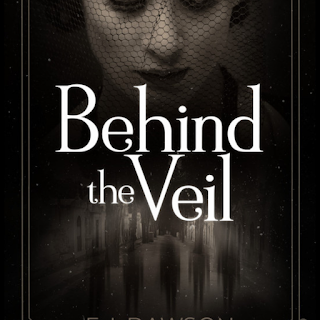