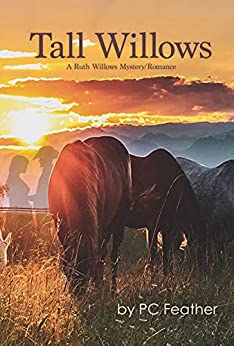 "Tall Willows" is a gripping novel filled with suspense and romance. When The Golden Valley School District's budget coordinator is shot and left to decay in the high school's abandoned darkroom by an unknown female, the school and community are turned upside down. Unbeknownst to the murderess, the victim had placed a large manilla folder full of budget reports on a messy desk in the school's main office. The budgets show someone has been embezzling money from the school district. Ruth Willows, the student who discovered the dead accountant, finds herself caught in the middle of a murder and a controversial romance. This unforgettable book is filled with twists and turns as Ruth navigates corruption, manages her tumultuous relationship, and the confronts identity of the murderess.As Ruth begins her senior year of high school, she realizes that the man she started in the Summer, is the school's new English teacher. Throughout the book, Ruth is faced with unthinkable challenges. She finds herself in a relationship that ethically needs to end but picks up again when she turns 18 years old. She also stumbles across a brutal murder and must do everything in her power to survive when the murderess realizes that she knows the truth. Despite facing seemingly insurmountable obstacles, Ruth finds a way to survive.

Momma Says: 3 stars⭐⭐⭐
Tall Willows left me in the fair to middlin' range - there were parts I really liked and others that I didn't care for, but I came out somewhere in the middle. The book falls under the romantic suspense genre, but the romance falls short for me. It's a taboo romance between student and teacher. As the blurb indicates, the romance pauses and resumes when Ruth turns 18. Now, I generally don't have a problem with a taboo romance (at least in fiction) as long as both parties are adults and act as such. That's my issue with this "romance." It felt a little juvenile to me, like I'd expect from younger teens. I won't go into details to avoid spoilers, but several times, Ruth acts childish enough that I doubted she was mature enough for an adult relationship. That said, her teacher doesn't act all that grown-up either, so I guess they're suited in that respect.
The mystery is what kept me reading. We get the killer's point of view here and there, and honestly, those parts were some of my favorites in the book. The killer is clearly unhinged, and PC Feather does a good job of getting that across without completely giving away the identity too soon. I enjoyed the killer's panic as they tried to cover their tracks and got in deeper and deeper with each act.
Thinking over the whole thing, I feel like the premise is good, but the characters, particularly Ruth and her teacher, as well as the romance, needed to be fleshed out and developed a bit more. The writing is good but the whole thing could've used some editing and proofreading. There's a lot of head-hopping, which got confusing at times and only served to pull me out of the story. Nevertheless, the book was well worth the read. The author is clearly talented, and I'll be interested to see what she does next and how her gift for storytelling grows with future books.