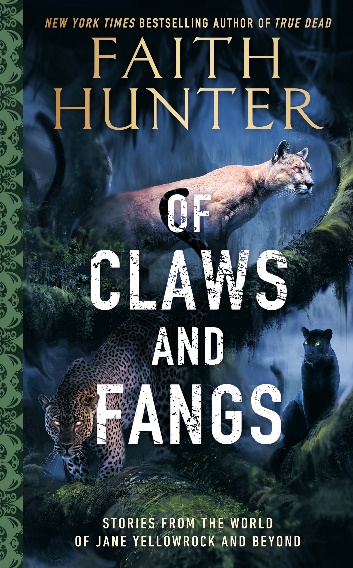 New York Times bestselling author Faith Hunter presents a stunning collection of stories from the world of shape-shifting vampire hunter Jane Yellowrock and beyond.Collected together for the first time, this volume contains shorter works featuring heroines Jane Yellowrock and Nell Ingram, as well as a host of other characters from the Jane Yellowrock and Soulwood series. Faith Hunter is “an expert at creating worlds filled with intriguing supernatural elements and exciting scenarios”* and her skills are on full display in this collection. From a vampire-filled Halloween evening in New Orleans to the searing tale of how a certain were-leopard first got his spots, this collection has something for everyone, and each story is sure to put the super in supernatural. With eighteen stories in all, Of Claws and Fangs will enrich and entertain—it’s a must-have for Faith Hunter’s readers and all lovers of fantasy.

Momma Says: 4 stars⭐⭐⭐⭐
Of Claws and Fangs has a little something for pretty much every urban fantasy fan. Eighteen short stories of various Faith Hunter characters and many of them answer questions posed by fans of her series. Now is when I admit that this collection was my introduction to this author. I know, I know, I'm not sure how I've missed her, but now that I've met a few of her characters, I'll have to do some catching up. As a newbie to Hunter's work, I wasn't sure how reading this collection would go, especially with so many beloved characters starring in these stories, and what I found was a bit of a combination. What I mean by that is I got a good representation of the author's writing style, which I liked, and I now have an idea of her characters and the worlds they inhabit. I liked every story, some more than others, but they're all good. That said, I do have some questions that I feel like a regular reader of Faith Hunter's books wouldn't have. Even with that in mind, I'd still recommend this book. The stories are fast-paced and entertaining, and they left me wanting more of these intriguing characters. And I can't forget to mention that cover. It's fabulous! It caught my eye, so even before I knew anything about what was inside, I wanted to know more.

Leo lifted his cuff and checked the time on his Versace Reve Chrono, though he knew, almost to the second, when the sun would rise. His kind always did. “I’ll be only a moment. Security will wait outside.”

George opened his mouth to protest. George was always protesting something. Leo lifted his finger, silencing his primo. “I will speak to Marcoise alone. You may cover the outer exits. You may not enter. The cleaning crew will be working and, as former military, they will be armed. I will calm them. I will not have a bloodbath in my club.”

George hesitated, clearly thinking about the numbers of potential victims and hostages. “Derek Lee’s company is new,” George said. “I’m not certain of the extent of his knowledge, or of his biases.”

He did not need to add Many have refused to work for the vampire Master of the City of New Orleans.

He raked through his hair with his long fingers, worried.

“Alone,” Leo insisted, and tapped on the window. The chauffeur opened his door. “Thank you, Alfonse,” Leo said. He was always polite to the help.

Into the night, he exited with all the grace of his kind, part ballerina, part snake, part spider, all predator. The night smelled of humans and blood. Saliva filled his mouth, hunger riding him. The girl earlier had been a tasty diversion, her body a delight as she used it to seal his promise, but this . . . this was the hunt. There was nothing like it, and even civilized Mithrans such as himself knew the desire, the overriding craving for shadowing and stalking prey.

Leo leaped to the door, his speed creating a pop of sound as the air around him was displaced. He keyed open the lock and entered. His men, left behind, rushed to guard the entrance and provide the protection his kind seldom needed. He slipped inside, into the shadows. Standing behind a brick pillar, he watched the cleaning crew, scenting them. The men were all dressed alike, in one-­piece gray uniforms; they were healthy, their blood touched with alcohol and marijuana. He had known it for centuries as hemp, MJ, ganja, and by a hundred other names and grades and varieties.

He took in a slow breath and parsed the chemicals in their blood. The marijuana smelled . . . odd. Impure. He watched as a small man, no more than five feet, five inches tall, lifted a bucket and then, oddly, dropped it. The pail landed with a clatter and splash of water on the concrete floor, and the man stood, hunched over, staring at the mess as if mesmerized. Certainly confused.

Leo sniffed again. There was something mixed with the marijuana, some chemical he did not recognize. The small man took a breath, a faint gasp of sound. He fell.

Leo held still, as only undeath allowed. The other men rushed to help. Another fell, his head bouncing on the floor. A third dropped. And another. Only Derek was still standing, the boss of the crew. Leo had hired Derek Lee’s fledgling company because of his service in the military, though the man was destined for far more. Derek pulled a weapon and backed to the bar, the brass rail at his spine, analyzing the room, the short hallways.

Leo said, “You did not partake of the smoke offered to the others.”

Derek swung his weapon toward the column hiding Leo. “Who’s there?”

“Leo Pellissier, Master of the City. The smoke? The weed?”

“Owner of the Royal Mojo. Fanghead. And no, to the weed,” Derek said, his weapon steady on the brick pillar. “One of the guys brought it. Said his brother had gotten a deal on the streets.”

“Mmmm. And a gift is always a good thing?”

“And what shall you do to the man who injured your cohorts?”

Leo chuckled. “There is more here than meets the eyes.”

“No shit, dude. I got free weed, four downed boys, and the Master of the City hiding behind a brick column. How ’bout you come out. Make nice-­nice wid me.”

“How about we take down whoever is waiting for us in the office? I smell six. One is a Mithran, one is female and bleeding, one is a dead human.”

“They are breathing. I will offer them healing blood if they are not awake before dawn.”

Derek considered. “You take the fanghead. I’ll take the others.”

Leo stepped from behind the column, hands where they could be seen.

“You seem certain that you can contain the humans,” he said. “Three against one?”

“This trap wasn’t for me. Makes sense it was for you. I’m supposed to be down and out so they won’t be expecting me.”

Faith Hunter is the New York Times bestselling author of the Jane Yellowrock series, the Soulwood series, and the Rogue Mage series.
at May 02, 2022