✱✱Audio Book Review✱✱ His to Own by Theodora Taylor 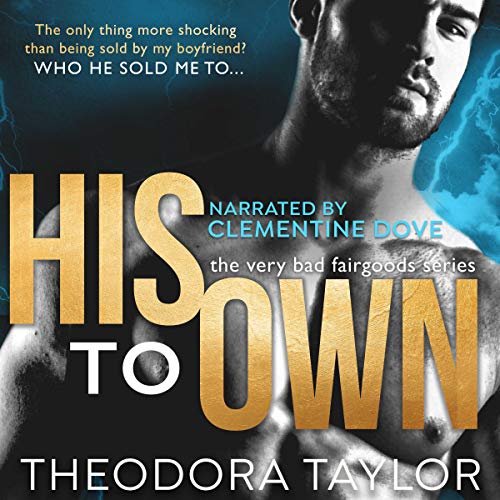 His to Own: 50 Loving States, Arkansas
The Very Bad Fairgoods, Book 3
By: Theodora Taylor
Narrated by: Clementine Dove

The only thing more shocking than getting sold by my boyfriend? Who he sold me to...

June: Over the years with Razo, I've learned to keep my mouth shut. Learned not to fight back. Learned that talking only makes it bad...fighting only makes it worse. I shut down my feelings long ago. Because it’s the only way to survive.

But then Razo sells me...to a dangerous biker with zero morals and a sick upbringing. A psycho who makes me feel like I have a flock of ravens inside my stomach. He never hesitates to remind me: I belong to him now.

And he'll do just about anything to keep me.

Mason: I know I'm crazy. I know I'm scary. And I definitely know I don't got no business buying some girl off a gang leader I'm supposed to be selling guns to. Fact is, her kind and my kind…we ain't never supposed to mix.

She belongs to me now. Don’t matter how I got her, only that I'm keepin' her. And I'm going to make her mine in all the ways that count.

Nobody and nothing is going to keep us apart.

Ready for a super intense love story? Then one-click to listen to this crazy hot BWWM romance!

Momma Says: 4 stars⭐⭐⭐⭐
His to Own is kind of twisted, and it gets darker than I was ready for, especially given the length of the book. It's a quick read - or listen, as the case may be, and Theodora Taylor crams a lot of stuff into those pages. I'm just gonna go ahead and mention that there were a couple of things that rubbed me the wrong way. I won't go into them here, so I don't give away too many of the book's secrets. What I will say is I had my doubts about Mason in the beginning, but the way Taylor handles his journey is nothing short of impressive. I'm not convinced that anyone could make that kind of turnaround so quickly, but this is fiction, so we can give it some leeway. Both characters, Mason and June, make some pretty big changes and have a lot of personal growth, and the way Theodora Taylor presents it, the growing relationship between them has a lot to do with many of those changes. There's also a bit of danger (if you read the blurb closely, you'll be able to guess where that danger is coming from). Anyway, that part of the story is gritty and fast-paced.
Clementine Dove is back with another great performance as she gives voice to the characters. I've come to expect good things from this narrator, and she never disappoints. The combination between Taylor's imaginative writing and Dove's ability to hit the nail on the head with the characters makes all the difference in the world. She captures June's struggle to face things head on and Mason's complete turnaround so well that even those stretches of believability are convincing.
What it all comes down to are the different elements that make a story, the things that catch your interest and keep it. I may not like everything about a character or everything that character does, but the story kept me listening. So, if you like intensity in your romance, and you don't mind a little darkness in the story, this is one to check out.