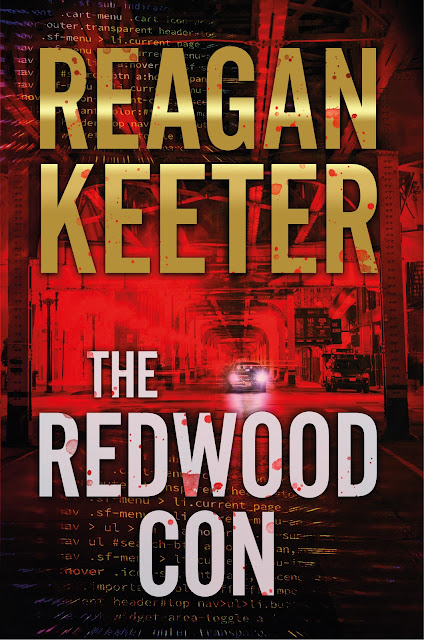 After a divorced Chicago father is charged with killing his girlfriend and unexplainable secrets about her come to light, he'll have to figure out how much he's willing to risk to find out the truth . . . and how much of it he wants to know.

Liam Parker finds his girlfriend, Elise, dead in the bathtub, wrists cut. Suicide, he figures. But the truth turns out to be more complex than anyone might expect. While trying to clear his name, Liam uncovers clues that suggest Elise was not who he thought she was: she was living under an alias, has a record, and lied about where she worked and where she grew up.

Making matters worse, his relationship with her has tied his fate to those of a conman and a stock broker, neither of whom he has ever met. And as these three men's lives hurl unexpectedly toward each other, Liam learns he'll have to do more than just prove he's innocent—he'll have to unravel a mystery that threatens to destroy everything he cares about.
The Redwood Con is the kind of thriller that will keep you guessing until the very end.

You can access all available links via the universal book link here: https://books2read.com/u/4AzJ0e

Some of the most popular ones include:

The author will be giving away 10 signed copies. For a chance to win, a reader should buy the book or e-book between May 5 and May 10 and email a copy of their receipt to redwoodcongiveaway@reagankeeter.com

Momma Says: 3 stars⭐⭐⭐
The Redwood Con is a quick read and a pretty entertaining story overall. The suspense is a bit of a mixed bag for me. There's a line at the end of the blurb that claims this story will 'keep you guessing until the very end.' Umm, not quite. In fact, I can tell you the exact spot where I knew at least part of the whodunit, and the other part wasn't far behind. I also figured out at least some of the motivation. Some, definitely not all. That gets a bit more complicated and the story gets somewhat convoluted toward the end with a lot of rapid-fire back and forth between the characters as Liam figures things out. There are several players in this twisted game, and the lines are clearly drawn between good guys and bad guys for the most part. There are a couple of characters who are kind of in the middle, but it's still easy to see which side they're on as the story unfolds. I do like the way the author laid this one out in terms of style. The chapters are relatively short, and they bounce from character to character with Liam getting the lion's share of page time. There are a couple of characters who only get one or two brief chapters, which can be a tricky business when it comes to story flow, but it works well for this one. In the end, this book was a little too predictable for me, but the author does give us a likable guy to root for in Liam, and the story is great for whiling away a rainy afternoon or weekend. Reagan Keeter is certainly talented and I would check out future books by him.
**ARC provided by NetGalley and the author.

Reagan Keeter is a #1 Amazon bestselling author and a National Indie Excellence Awards finalist. His previous book is a psychological thriller called BURIED.Reagan has worked as a writer and editor at Georgia newspapers. From Georgia State University, he earned his undergraduate degree in Journalism and from Southern Polytechnic State University his master's in Technical and Professional Communication. He has lived in Bucharest, Prague, Manchester, and Chicago. Currently, he resides with his wife and two dogs in Atlanta, Georgia.