✱✱Audio Book Review✱✱ A Change of View by Freya Barker 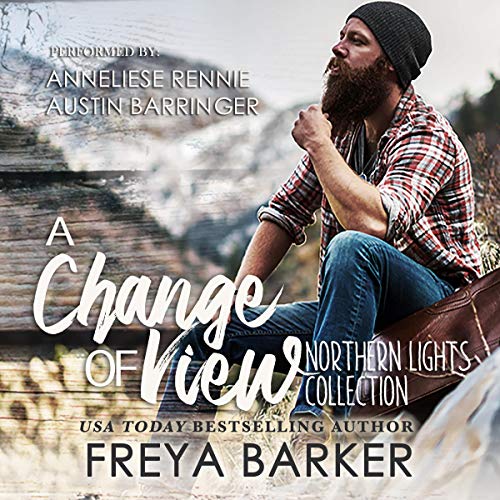 What if, one morning, you look in the mirror and no longer recognize the person looking back?

When Leelo can no longer identify herself by the roles that once defined her, it's both terrifying and liberating. Oh, she feels the loss, grief, and the anger, but when she inherits property up north, she jumps at the promise of freedom and independence. Yet, not everyone in her new community is what they seem, starting with the surly mountain man down the road.

As owner of the local fishing lodge, Roar is content with his everyday life. And the older he gets, the less he appreciates change. So, when a blue-haired, tattooed "city girl" moves into the old motel, shaking up his daily routine, he’s none too pleased. Still, something about the woman’s easy smile and almost reckless grit has him step up as her keeper.

Momma Says: 3 stars⭐⭐⭐
A Change of View is my first reading experience with Freya Barker, and it's left me somewhere in the fair to middlin range. It's a good story, but it felt like it was stretched out unnecessarily.
There were several things that I really liked about this story. I love that the characters are around my age, which is a rare find in romance lately, and I liked both Roar and Leelo. They didn't act like lovestruck teenagers, they're both strong characters, and I like that the author paints them realistically. Granted, Roar seemed to be aging more gracefully than Leelo, but isn't that always the way? Either way, it felt real as far as their experience and actions. Leelo is understandably insecure after a bitter divorce, but she's working hard to accept herself and she's unapologetically a what you see is what you get kind of woman. Roar, of course, is the typical sexy love interest, but he's also a complete sweetheart and he's comfortable in his own skin.
Of course, I can't talk about an audiobook without mentioning the narrators. Both Anneliese Rennie and Austin Barringer do a great job with this story, and I like that I didn't feel like I was just listening to someone read a story. The emotion came through wonderfully, and the performances of both narrators worked well for these characters.
As I mentioned, I was left in mid range with this book, and a lot of that can be chalked up to the length of the book. Now, I have no problem with longer books, and I've read quite a lot of them, but if a book is going to be 400+ pages or almost 10 hours listening time, then it should be paced so that there are no lags in the story. This one is not. There is just too much of the mundane for my tastes. I didn't need a detailed account of Leelo building a webpage for her hotel only to forget to save it when she went to get clothes out of the dryer. Really? I can get that right here in my own everyday life.
Then we have the suspense part of this story. Honestly, with the way it's done, I wouldn't have considered this a romantic suspense if I hadn't already known that's what it was supposed to be. It was easy enough to figure out who was behind everything, and it was even pretty easy to figure out the why - maybe not all the details of it but enough that it didn't have a mystery vibe at all. Other than one scene with some danger, the 'mystery' felt more secondary - like something to move the romance along, something to give Roar a reason to be the big protective male and hang around. The things that happened could've been played up a bit for a sense of mystery, but that just wasn't the case here.
To sum it up, this one is an entertaining romance with great characters, but it meanders much more than I liked, and I didn't consider it suspenseful in the least. In the end, I liked it okay, but it's not something I feel like I'd listen to again anytime soon.
❃❃Audiobook provided by NetGalley and Spectrum Audio