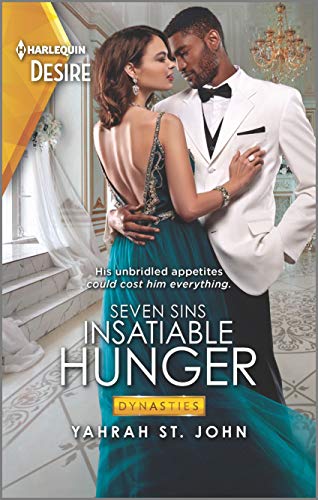 Feel the drama and passion in the Dynasties: Seven Sins series!

She’s just a friend but he craves so much more…
His unbridled appetites could cost him everything.

Ryan Hathaway isn’t about to let his friend marry the wrong guy—not when the right guy is him. But getting out of Jessie Acosta’s friend zone could destroy his plans to become Black Crescent’s CEO. He can’t afford to give in to the overwhelming temptation of wanting her. But with another man looming in Jessie’s life, Ryan can’t afford not to…

Harlequin Desire: Luxury, scandal, desire—welcome to the lives of the American elite.

Momma Says: 3 stars⭐⭐⭐
Insatiable Hunger turned out to be sweeter than I expected. I had it pictured as a grittier read, but it ended up being rather fluffy. That's not necessarily a bad thing - just not what I was expecting. There is some drama to come between our couple, but for the most part, this one is a light, quick read. A sexy read, but still light and quick. All in all, it's an entertaining friends to lovers romance, but there are some interesting secrets and a twist that relate back to the first two books in the series. Things can still be followed, but it's easier if you read the series from the beginning. I think this one would appeal to anyone who enjoys a friends to lovers romance in an interconnected series. There is an underlying event that's the catalyst for each book, and like the first two in the series, the couple has chemistry and the characters are interesting.
❃❃ARC provided by NetGalley and Harlequin Desire