✱✱Audio Book Review✱✱ Stay with Me by Kristen Proby 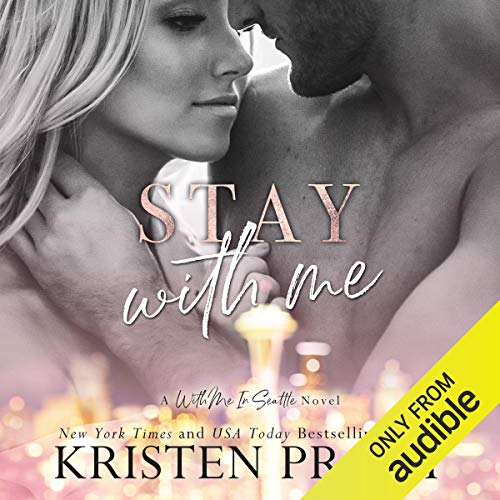 Stay with Me
With Me in Seattle, Book 9
By: Kristen Proby
Narrated by: Kitty Bang, Lee Samuels

From New York Times best-selling author Kristen Proby comes Stay with Me, an all-new addition to the series that has sold more than a million copies to date, her beloved With Me in Seattle series!

Amelia Montgomery has left her past behind her. With a beauty and fashion career that’s skyrocketing and a loving family around her, everything else is just junk in the rearview mirror.

When she has to drop out of the public eye, her cousin Jules offers her a new, temporary life on the Puget Sound. Her past may be catching up with her, but hope for the future is in Seattle.

Wyatt Crawford can’t figure out the enigmatic beauty who’s living next door. As an architect, he’s usually good at looking beneath the surface - but she barely even leaves her house.

Until she needs his help.

When she knocks on his door, how can he resist? It isn’t long before Wyatt and Amelia become more than just neighbors. But when he finally learns the truth, will the skeletons in her closet be too much for him to handle, or will he stay?

Momma Says: 4 stars⭐⭐⭐⭐
Stay with Me isn't my first experience with Kristen Proby, but my feelings about this one aren't quite in line with what I expected based on what I have read or listened to. That's not to say it isn't good, but there were things that just didn't work for me. I liked the premise, and I liked the characters, including the secondary characters who were new to me since this is the first book I've read in the With Me in Seattle series. I'll add here that I didn't have any problem following the story. There were a lot of secondary characters, but Proby does give enough information so I was able to keep everyone straight as they came and went.
As I mentioned, I liked Amelia and Wyatt. The problem is there were times when I liked them better separately than together. I think a lot of that has to do with Wyatt's jealousy. The way he acted felt a little over the top for this guy who was otherwise so well rounded, especially the way he acted in the latter part of the story when the couple has the big angsty problem to overcome.
I realize I sound like I didn't like this story at all, but that's really not the case. There were some truly great lines in this one, which is exactly what I expect from this author, and Wyatt seemed to understand exactly what Amelia needed to hear and what would make her feel cherished and safe. I guess that's why I had such a hard time wrapping my head around this one. This couple went from one extreme to the other, and honestly, I couldn't decide if I wanted them together or not. I don't know, maybe that was the intention behind it all. If so, it definitely worked.
Whatever the reason, this couple was an exercise in frustration. Ah, but here's the rub - as much as they frustrated me, as much as I'd have liked to reach into the pages of the book and shake the daylights out of both of them, I wanted to keep listening. I wanted to see how things would play out. So, Kristen Proby did her job quite well as far as keeping me engaged and listening to this story.
The narrators did a great job with these characters in my opinion. I was already familiar with Lee Samuels and his sexy voice, but Kitty Bang was new to me. She has just the tiniest bit or rasp in her voice that worked well with the steamy scenes as well as when she needed a bit of fire in her voice.
So, what it all comes down to is this couple may have driven me a little crazy, they may have jumped into things a little quickly, and they may have needed a little shake every now and then - but, the writing along with the narration kept me listening to the end, and that ending was kind of perfect for Amelia and Wyatt.