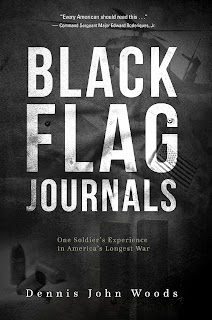 The story of America’s longest war is complicated and difficult to convey, unless you were there. Dennis Woods was there. By following his stories in Iraq and Afghanistan, we can sense the enormity of his combat experiences. Originally written for his daughter, Black Flag Journals is taken from the author’s nine battle book journals. It covers his time from the fall of the Twin Towers through his last combat tour.

Black Flag Journals contains not just stories from the first war of the new century, but a day-by-day record of events that other veterans may use to relate their own experiences. All who enjoy real life stories, and followers of history will connect with this first person account of America’s longest war.

At higher echelons of command, the rules of engagement were used as a rheostat. That rheostat could be dialed up or down to adjust the level of violence. The level of violence was often adjusted to achieve military and political goals. At the soldier level, the rules allowed one to “kill with a conscience, if necessary.” I mention this now as, over time, the rules of engagement and what constituted a legal engagement would change from time to time based on conditions. 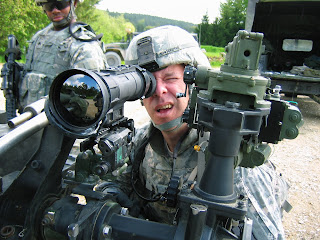 CSM Woods is credited by the US Army Smart Ideas program as the inventor of;

On his most recent tour to Afghanistan, CSM Woods pioneered the first use of artillery training rounds in combat as a form of scalable fire support designed to limit civilian death and collateral damage.  He is the author of, ‘Black Flag Journals One Soldiers Experience in America’s Longest War’, and numerous magazine, newspaper articles, including training pamphlets concerning Artillery, night vision, and combat operations.