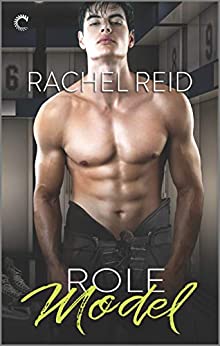 The highly anticipated fifth novel in Rachel Reid’s Game Changers series sees a grumpy professional hockey player meet his match in an out-and-proud social media manager…The hits just keep coming for Troy Barrett. Traded to the worst team in the league would be bad enough, but coming on the heels of a messy breakup and a recent scandal… Troy just wants to play hockey and be left alone. He doesn’t want to be in the news anymore, and he definitely doesn’t want to “work on his online presence” with the team’s peppy social media manager.Harris Drover can tell standoffish Troy isn’t happy about the trade—anyone could tell, frankly, as he doesn’t exactly hide it well—but Harris doesn’t give up on people easily. Even when he’s developing a crush he’s sure is one-sided. And when he sees Troy’s smile finally crack through his grumpy exterior, well… That’s a man Harris couldn’t turn his back on if he wanted to.Suddenly, Troy’s move to the new team feels like an opportunity—for Troy to embrace his true self, and for both men to surrender to their growing attraction. But indulging in each other behind closed doors is one thing, and for Troy, being in a public relationship with Harris will mean facing off with his fears, once and for all.Game ChangersBook 1: Game Changer
Book 2: Heated Rivalry
Book 3: Tough Guy
Book 4: Common Goal
Book 5: Role Model

Momma Says: 4 stars⭐⭐⭐⭐
This fifth Game Changers book gives us Troy and Harris for an opposites-attract romance. Troy's all broody and grouchy, and Harris is happy and outgoing - and I loved these two together. These guys are also an exercise in frustration as they circle each other and go back and forth about their relationship, or deciding whether there even is a relationship. That's the thing, though, even as I wanted to shake some sense into them, I still loved them. Harris is just adorable, and Troy tugs at the heartstrings as he tries to figure things out while also trying to stand up for what's right. Of course, this pair generates plenty of steam, but some of my favorite parts were those little moments when Troy would let his mask fall. That was largely due to Harris, who seemed to always bring out the best in him. So, yeah, these guys had plenty of chemistry, both in and out of the bedroom.
If you've followed the series, you'll also see some past favorites. Several of the guys pop in and out, but Ilya Rosanov is pretty prominent throughout this one since he's captain of Troy's new team. Ilya is such a colorful character, and he's a great addition to the story. As I mentioned, several of the guys pop in and out, and there are things mentioned from past books, but it's nothing hard to follow even if you're new to the series.