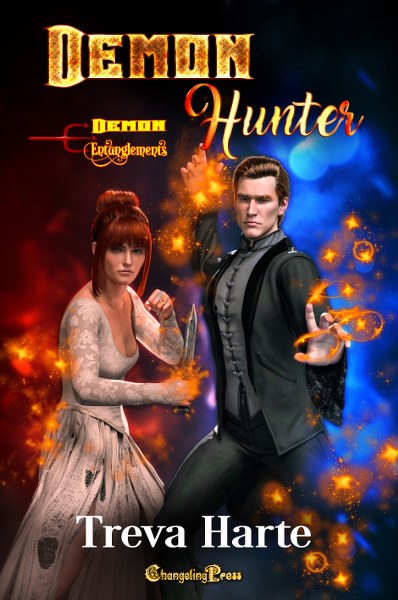 Dorothea, the widowed Duchess of Berea, is still in mourning when two male visitors come calling -- the first to her remote Irish estate since her husband died. One is her cousin, who draws her back into the dangerous world of demon hunting that is her family tradition.

The second, the mysterious Brown, promises to help her when her own family is unable to. Neither Dorothea nor Brown expects the sudden hot attraction they feel for one another. Dorothea, used to being the protector, discovers how dangerously appealing it is to have someone protect her. But is Brown someone she can trust when the demons start hunting the demon hunter?

Dorothea, the Duchess of Berea, had two visitors in her drawing room after having none for almost eleven months of mourning. And one was a stranger.

He looked young (although he could be older than she was) and slight and quite ordinary. He was dressed nicely enough -- but he still wasn’t anyone she’d ever seen before, and she knew many people. A wealthy tradesman, perhaps? Or had her cousin outfitted him? Yet he was her cousin’s companion, and her cousin Alexander was particular. Alexander knew she was still in seclusion. One might see family at this time, but why this person?

“Wh --” Before she could get either why or who out of her mouth, Alexander stepped forward.

“Maitresse.” He bowed, very formally, in front of her but didn’t kiss her hand. Instead, he almost grasped her outstretched hand to touch it to his forehead. Her breath hissed in. She knew what that particular greeting meant.

“I prefer ‘Your Grace’ if we are to be that polite to each other, Cousin Alexander.” The half-smile she’d had on her face disappeared. “No one calls me by that other title here.”

“No one else needs to.” Alexander straightened and looked her in the eyes. “Cousin Thea.”

“And those few who call me by my first name call me Dorothea. I’m not four years old any longer.” The diamond ring on her finger winked in the sunlight as she snatched away the hand she had put forward, when she had been expecting an ordinary greeting.

“But I’m here to remind you of your family and your… upbringing. You seem to have forgotten it here.” He glanced at the large hall, decorated with long gilt mirrors, carpeted floors, and some portraits of long dead ducal ancestors. “In your late husband’s home.”

“I didn’t need to remember any of my past. His Grace is -- was -- very powerful. Very wealthy. As his widow, I still can choose how I want to live. And here I am.” Once she would have screamed and stamped her feet at Alex’s return and what he was telling her. But her late husband had shown her better ways to impose her will. Oh, Daniel. She missed him so.

Lately she’d grown almost afraid of the emptiness inside her. She didn’t mourn very much any more. She didn’t look forward to anything. There was nothing inside. It was safest that way, if a little monotonous. This intrusion into her solitude was making her curious, however. She could feel a mild stir of emotion. How long had it been since she felt that?

“It’s a beautiful manor,” Alexander continued, his tone still mildly courteous, telling her nothing. “It’s hard to believe such a place exists on this benighted island.”

“It’s not that uncivilized here,” Dorothea told him. “Necessarily. Money always smoothes the path, doesn’t it? Even when one is English in Ireland.”

“Does it?” Her cousin shrugged. “I wouldn’t know.”

She’d forgotten, actually forgotten, how her family always just barely managed to keep up appearances. They’d had decades of living and acting like the titled family they were and desperately trying to forget the debts and the mortgages piling up around them.

“I would have thought my marriage was enough to pay off a good many problems.” Dorothea didn’t look at him. “Wasn’t that why I was sold off before I even had a Season?”

“It’s been over ten years. We heard you were happy with your husband.”

“Yes. And have you forgotten and forgiven my marriage?” She didn’t turn her head. What difference would his answer make? But they had thought they might marry, years and years ago.

Neither have I, Alex. Not entirely. Not ever. Dorothea stared out the window at the columns gracing the outside and rolling lawn beyond it. The flicker of an old rage simmered inside briefly.

“But that’s not why I’m here.” She heard Alexander’s steps behind her, his body almost close enough to feel his warmth. She didn’t want him to touch her. But he didn’t force her to turn even as she braced herself. “This visit is about our family business, Maitresse. And only you can manage it now.”

“Oh, dear God in heaven, no,” Dorothea said. “I was happy to leave that behind.”

It had been so easy to be the young wife of the old duke. To flirt and spend money and mingle among the gentry of Dublin and the nobility of London whenever she or her husband chose. To forget all the fear and danger of the past, along with the debts her family owed. His Grace had seen to it that she was protected from any relatives making monetary requests. Protected from anything she didn’t want to do.

Alexander let out a bark of laughter. “God and heaven has little to do with it. And you can never leave what you need to do. We both know that. You’re the maitresse and the only one we have left in our line.”

“But demon hunting is such a nasty business, Alexander.” Dorothea, Duchess of Berea, knew her voice was mocking and icy. Entirely ducal. She faced him. “Her Grace has no need to do it any longer.”

Her cousin looked unmoved. “If Her Grace refuses, we know the demons may come hunting for her instead. They also know you’re alone.”

“Actually I’m not -- or won’t be soon,” she replied. “My husband’s natural son will be visiting me to help settle some estate matters.” 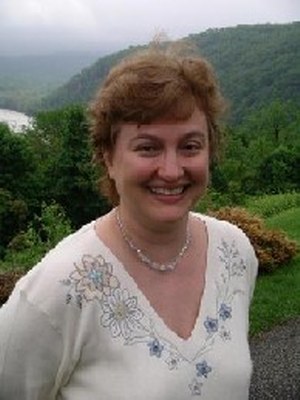 Treva Harte has always been an overachiever. She also collects things. First it was degrees. First a B.A. in English, then she decided to go back for a Master's degree. Not content with that, she added a J.D. Since then she's added a husband, also an attorney, and two children to her collection. She's continuing her ways as an overachiever, writing her wonderfully offbeat tales of passion and possibilities -- in her spare time.