My old "friend" insomnia didn't visit last night, so I was able to catch some much needed zzz's. Probably too many, considering I woke up feeling entirely too awake this morning.😲 So, I grabbed a cup of coffee (a food group around here) and my advanced reader copy of Heather Myers' upcoming release, Lip Locks & Blocked Shots. My intention was to enjoy my coffee and read a few chapters before getting some housework done. However, those plans didn't come to fruition, as so often happens with plans.

Lip Locks & Blocked Shots is wonderfully written in third person POV, the characters are so well developed that they practically leap off the page, and the whole story is so interesting that I couldn't put it down. It fits nicely into the Sports Romance genre and while there isn't a lot of game play in this one, we do get the inner workings and politics of the team, which I found just as interesting. The steam level is high and there are adult situations, so certainly 18+ recommended. Now, for the cover! I just love the covers for this series! 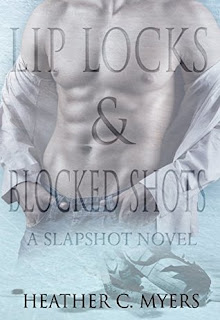 By now, most of you know how I feel about labeling a book as something and not actually having any details in the story. Doesn't matter what label that is - if it's a "Bad Boy" romance, make sure that character is a bad boy, if it's a sports romance, include something of that sport in the dang book. I'm sure you see where I'm going here. That is not a problem with this series! Kudos to Myers for having some actual game play throughout this series. We don't get much of that in this book, but we do get the inner workings and politics of the team - pretty fitting as the main character is the owner.

On that note, I'm going to share a little secret. I don't watch hockey - at all. Actually, I don't watch or know much about most sports. (Gasp!😳) But, I do like books and movies about various sports. I know, makes no sense, right? I don't understand it either! With Myers' Slapshot Series, we do get some actual game play, but it's done in such a way that even I could understand what was going on and was able to enjoy it. In fact, I found myself interested enough that I may watch a game!

On that note, I'll get on with my review of this book! I've been waiting for this one since I read the first book in this series! Seraphina, owner of the Gulls, finally gets her turn!

Sera has been the do everything by the book, judged because she's a woman, worried about public image owner throughout this series. I've been waiting for her to get the chance to come out of her shell and Heather Myers didn't disappoint. Brandon and Seraphina are so good together and compliment each other so well.

Overall, this third book in the Slapshot Series is a fun story with some great characters, some fan yourself sexy, an antagonist that truly deserves a punch in the mouth, and a couple that you can't help but root for. I mentioned earlier that my housework plans didn't come to fruition. That's because once I started reading, I could not put this one down! I loved every single word! Because I loved it so much, I won't even blame this talented author for my lazy day and insist that she come do my dusting!😜

Lip Locks & Blocked Shots is part of the Slapshot Series, but would work fine as a standalone. However, I would strongly recommend reading the whole series. There are so many great characters that you don't want to miss. Besides, the beauty of a series like this one is getting to see those beloved characters throughout the series. FYI - Negan is still my favorite! And no, I'm not telling you who Negan is, you'll have to read the series to find out! 😀

You can find the entire Slapshot Series on Heather Myers' Amazon Author Page. And Lip Locks & Blocked Shots is currently on pre-order and set for release tomorrow, June 23rd. It will also be listed on Kindle Unlimited. Check it out! You won't be disappointed!

Thanks for joining me! Time to get dinner going so my crazies don't revolt!

There Galapagos My Heart Blitz and Giveaway