Watching You by Gretta Mulrooney

Ever finish a mystery and find yourself thinking 'Wait, what?' and then go flipping back through the pages, looking for clues that lead to what you've just read? That's where I found myself with my latest read, Watching You by Gretta Mulrooney.

Momma Says 3 out 5 stars
Watching You is well-written in third person POV. It does fall into the Crime Mystery genre, although I would consider it more a Crime Drama for the most part. Other than the occasional bit of language, I found nothing that would be inappropriate for any age.
*Review copy courtesy of NetGalley. 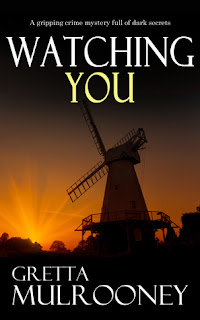 As I said, Watching You is well-written and the scenes are quite descriptive, but the pace is almost agonizingly slow in the first half of the book. There is a mystery to solve, but other than the creepy emails and thoughts of the Watcher, it seemed like a lot of random conversations that led nowhere.

The pace does start to pick up some a little more than half-way through the book, and things gradually start to come together - and I do mean gradually. The problem is it was just a little too late at that point.

For me, the appeal of a mystery is trying to suss out the clues to solve it before the big reveal. A few of those clues along the way might've helped with making this reader want to keep reading rather than set it aside for a bit. That was the biggest issue, it was just entirely too easy to set it aside when I came to the end of a chapter.

We do get quite a bit about the main character's (Tyrone Swift) personal life. Sadly, I became more interested in where that was going than in the actual case he was working.

On a positive note, the pace does pick up and there is a fair bit of action in the last few chapters.

If you enjoy Crime Dramas, you may like this one a bit better than I did. It is available in ebook and paperback formats at Amazon, and it's listed in Kindle Unlimited. (Link below.)

Thanks for joining me! I'm not sure what's next on my list, but I'm always open to suggestions if you have any.