Jane just wanted a new start when she made the decision to move from Quebec, Canada to New Orleans, USA. But no matter how far she ran, she can’t help looking over her shoulder. Thinking no one would be able to find a young teenage girl in the kitchens of a care home, Jane started work at the only place she could find, determined to succeed with her plan. But when one of the larger residents tumbled and fell, and even though Jane appeared to be an underfed eighteen year old, she helped the other nurses carrying him back to bed with a hidden strength. The secret of her strengthen something she kept from Bryce for almost five years. It’s been years since Bryce began working with Jane. He’d been working at the care home only a few weeks before her, but was quick to observe her when she was promoted from kitchen help to orderly after proving she could take care of her own. Bryce notices the way she looks over her shoulder when she walks down the hallway, how she surveys a room when she walks in and calculates how could she escape the easiest, never sitting in a corner but always towards an exit. Bryce can tell that she is haunted by her past and is constantly on the lookout for it to finally catch up to her. But as years pass and their friendship starts to blossom at work, he watches as Jane becomes more relaxed, healthier and muscular, yet curvy as she matures. Even though Bryce has been attracted to Jane for some time now, he’d always given her the space she needed to get over whatever it was that first brought her here. But now, Bryce wants to try to take their friendship to the next level, and perhaps more. Jane is hesitant at first to accept Bryce’s invitation to a pub for drinks after work, but after he reassures her it isn’t a date, she gives in. One thing leads to another and the two are spending more and more time together after work as what was first getting a bite to eat turns to a real date at the movies, and even dinner over at Bryce’s apartment. Soon Jane will have to make the decision if she is going to reveal herself to him as a werebear. About the time their relationship starts to get serious, her childhood sweetheart makes a reappearance into her life, causing everything from Jane’s past to reel her in again. It seems now Jane will have to finish what happened in her past if she is ever going to have a bright future with Bryce.

Jane is a bit different than most shifter romances in a couple of ways. The romance is more of a slow build, falling in like, lust, and then love rather than the fated mate, have to have you right now kind of thing, and our protagonist is a female. Both of which are refreshing changes in the world of paranormal romance. Jane is a bit of a contrast all on her own. She's sarcastic, sassy, and speaks her mind freely, yet is quite timid when it comes to moving forward with a relationship. As the story progresses, we do find out the reasons why Jane is against getting close to people and her push and pull with Bryce makes perfect sense. The sweet and patient Bryce is absolutely perfect for Jane and I loved how he moved forward in the relationship without pushing, letting Jane set the pace. They also have some fun banter as they start at friends and progress from there. Of course, we get a bit of suspense, danger, and some action with our love story in the form of an ex with secrets, trouble from the past, and a bad decision by a family member. This is the third book in the Big Easy Bears series and does work as a standalone with peeks at past characters, but once you've met this lovable bunch of bears, you'll want to know more about them.

❃❃❃
Check out the rest of the Big Easy Bears series 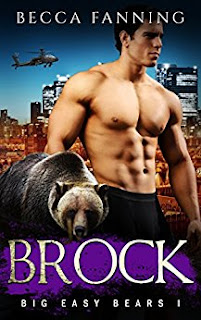 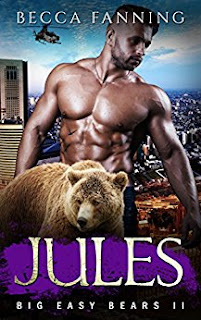