Order of Protection
A Courting Justice Novel
by Lexi Blake 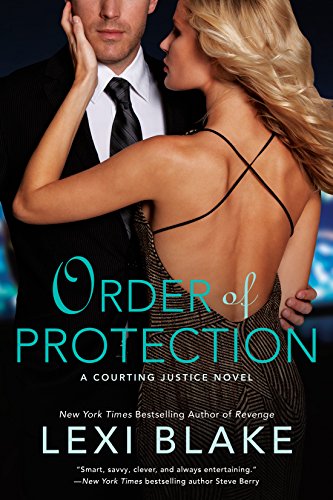 A sexy and suspenseful new contemporary romance from New York Times bestselling author Lexi Blake where love and law entwine for a conviction of the heart.To high-end defense attorney Henry Garrison, Win Hughes is a woman he met during one of the most trying times of his life. She's soft and warm, and he finds solace in their brief relationship. But Win has a secret. She's actually Taylor Winston-Hughes--born to one of the wealthiest families in the country, orphaned as a child by a tragic accident. Win moves in the wealthiest circles, but her lavish lifestyle hides her pain. When her best friend is murdered in the midst of a glittering New York gala, Win's charged with the crime, and the only person in the world she wants to see is Henry. Henry is shocked at the true identity of his lover, but he can't reject the case. This trial could take his new firm into the stratosphere. Still, he's not getting burned by Win again. And yet every turn brings them closer together. As the case takes a wild turn and Win's entire life is upended, she must look to the people she's closest to in order to find a killer. And Henry must decide between making his case and saving the woman he loves...

Order of Protection opens on the beach and as we meet our main characters, we also get a bit of backstory for each. Henry and Win are both fresh out of rehab - him for alcohol and her for anorexia, and they're both trying to get on with their lives. The scene of their first meeting is witty and fun and there seems to be some chemistry between this sexy older man and the attractive young woman he brings in out of the rain (literally).
From what I read in the opening chapter, I expected a reasonably paced story. Instead, it slows down and a lot of the next several chapters are well, kind of boring, which led me to set this one aside several times. The book does pick up again at about the halfway mark and we begin to get some real suspense going on.
The suspense side of the story was interesting and did keep me guessing, but by that time, I was disconnecting from the romance. Henry's reaction to Win's secret was way over the top, especially considering his past. If anyone should understand the need for anonymity, it should be Henry. Instead, his complaints become tedious. I did like Win's wit and attitude, but when Henry starts acting like a child, I didn't much care if this pair made it work or not. Plus we have the fact that neither of these people, fresh out of recovery, ever feel the need to get help when stress gets high. Even early in the book when Henry wants a drink, he runs instead of contacting a sponsor, friend, therapist, etc.
To sum it up, this first Courting Justice novel left me straddling the fence. There were things I liked and things I didn't, and whether or not I'll continue on with the series remains to be seen.

Email ThisBlogThis!Share to TwitterShare to FacebookShare to Pinterest
Labels: First to Read, Reviews