Awaken
Book 1 in The Dark Paradise Chronicles
by Isadora Brown 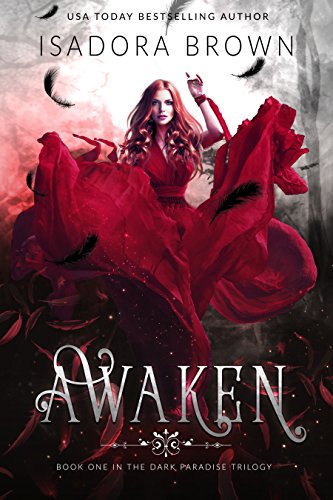 Souls are being recruited by the devil himself to prepare for an all-out war against Heaven, and Reese Lespoir finds herself at the heart of it. She's awoken from a coma by a kiss from a mysterious stranger who's more prickly than prince. As she tries to assimilate to normal teenage life, she learns she now has the power to see the future, which apparently, requires careful training. Enter Prickly Prince, who seems to find more enjoyment being a witty drunk than honing her craft.When a girl is taken by Onyx City's most notorious criminal, who may or may not be a demon, Reese is thrust into the forefront of the impending war well before she's ready. Her new friend, Andie Shepherd, is intent on getting her sister back from the demonic criminal at all costs, and if Reese doesn't help, Andie may have to rely on the assistance of a vigilante known only as Black Wing, dangerous as he is tall, dark and handsome. And that's only if he's in a particularly generous mood. Just because he has wings doesn't mean he's always an angel, after all.Awaken is the first book in a new urban fantasy romance series that fan of Batman and dark adaptions of Greek mythology can’t put down.

This one took me a bit to get into it and figure out the storyline, but once I did, I was hooked. There are a lot of players in this game, but they do have significant rolls as the story progresses, so don't count anyone out as a throwaway character because they may be back with a purpose. Think Batman, Greek mythology, angels, good vs evil, and even a little bit of fairy tale all rolled into one and that's an idea of what's in this book. We can't forget the romance - there are three, and chapters alternate between the three young women involved in these romances.  We have the handsome and very rich business man, the serial killer, the guy who can get whatever you want for a price, a girl who is awakened from a coma with a bit of magic, and sisters who are drawn to different sides in an oncoming battle they don't even know is coming. This first in the series is intense as it introduces the characters and the world they live in, and there are some things that would be over the top on the believability scale, but this is fantasy and in a world such as this one, anything is likely. This is the beginning of a series, so everything isn't tied up in a neat little bow, but we aren't left with an earth-shattering cliffy either. It's more open-ended, certainly leaving me curious about where this story goes next.