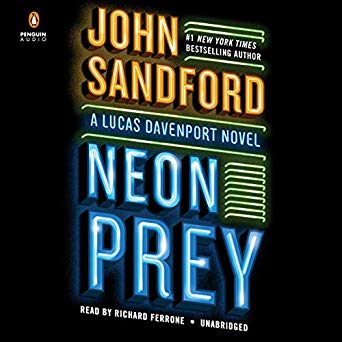 Lucas Davenport tracks a prolific serial killer in the new nail-biting number-one New York Times best seller from John Sandford.
Clayton Deese looks like a small-time criminal, muscle for hire when his loan-shark boss needs to teach someone a lesson. Now, seven months after a job that went south and landed him in jail, Deese has skipped out on bail, and the US Marshals come looking for him. They don't much care about a low-level guy - it's his boss they want - but Deese might be their best chance to bring down the whole operation.
Then, they step onto a dirt trail behind Deese's rural Louisiana cabin and find a jungle full of graves. Now, Lucas Davenport is on the trail of a serial killer who has been operating for years without notice. His quarry is ruthless, and - as Davenport will come to find - full of surprises....

First, let me say that Lucas Davenport is one of my all-time favorite characters and has been since John Sandford hooked me 29 books ago. That said, Neon Prey is not one of my favorites in the series. I still enjoyed it, but it does have its share of problems. This one is more action-driven, and I really missed Lucas' own brand of investigating. We do get a bit of that, but as bad a person as Deese was, he just was not up to par with what we've come to expect for this series. And by about the 75% mark, I decided that Clayton Deese must be the luckiest serial killer ever written. I mean seriously, it didn't take long to figure that he wasn't the sharpest tool in the shed, yet he manages to elude capture time and time again. Nevertheless, I still enjoyed catching up with Lucas and company. We get a bit of time with some past favorites and lots of Bob and Rae. I'll admit that I wasn't entirely sold on Bob and Rae when they first came into the series. To be honest, I think it was more that I missed Jenkins and Shrake, but the new sidekicks won me over. They have great chemistry, both together and with Lucas, and I like that they're straight shooters. They don't coddle Lucas, and they don't mind speaking their mind. We do have a piece of this book when Lucas goes through a little bit of a personal crisis. I won't elaborate so as not to give spoilers, but I worried that it would make him 'careful.' Lucas has always been that all-in, no holds barred, whatever it takes kind of guy, and I really didn't want to see that part of him change too much. In the end, I didn't love this one as much as some of the others, but I still enjoyed the listen.  Richard Ferrone does his usual terrific narration. In fact, I've listened to enough Prey books, that Ferrone has become the voice of Lucas in my head when I'm reading. And of course, wit and sarcasm. No one does sarcasm better than Lucas, or maybe that's John Sandford by way of Lucas Davenport. Either way, I'm always glad to see Lucas is still as sharp-tongued as ever, and I'll be anxiously waiting whatever happens next for this character.