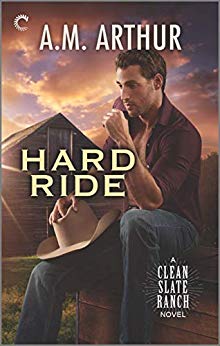 City slicker Derrick Massey has always had a thing for cowboys. So a roll in the hay with Kendall “Slater” Stamos during a rustic weekend wedding is more than A-OK. But when Slater’s forced to hang up his saddle for the season, Derrick surprises even himself with his proposition: be my fake boyfriend and get my family off my back about finding a permanent partner.Though unexpected, the arrangement is a win-win. Derrick gets a plus-one for a slew of summer weddings and Slater gets a place to stay while he recuperates…with lots of casual fun in between. Which is just how the sexy cowboy likes it: casual. Yet it’s obvious the chemistry between them is anything but.With the countdown to their “breakup” on, the more time the two men spend together. And the more it becomes clear that what they have could be real, if only they let it be.

This series has been a bit of hit or miss for me, and I left the last book leaning toward being done with it. Nevertheless, I do love cowboys, so I dove back in one more time. The result is that I do like Hard Ride better than the last book, but only just. This one moves a lot like the others, so in other words, it's too slow for my taste. It starts off with a fan yourself steamy scene between Slater and Derrick, and the thing that leads to the boyfriend arrangement certainly had potential, but that potential isn't quite realized. The angst is largely based on a serious lack of communication. Everyone is having feelings, but no one is willing to say so. Instead, we just keep plodding along with a bit of steam and a few amusing dates and social engagements. Fortunately, both characters are likable enough, but I guess it's more a lack of any feeling about Derrick because there isn't much character building where he's concerned. He has trust issues and a thing for cowboys. That is pretty much it, which is surprising considering the length of the book. Slater, on the other hand, gets the lion's share of page time and I really did like him. I just didn't care for the way the romance developed.