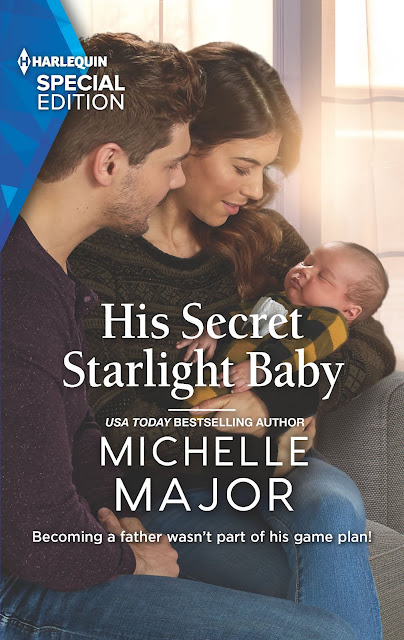 Coparenting this baby is going to take teamwork

Former professional football player Jordan Schaeffer’s game plan was simple: retire from football and set up a quiet life in Starlight. But when Cory Hall arrives with their infant son, Jordan not only gets a surprise but has to devise a new life strategy. And Cory finds herself agreeing to be his fake fiancée until they work out a coparenting plan. Jordan may have rewritten the dating playbook…but will it be enough to bring this team together?

Book 2: The Last Man She Expected

Momma Says: 4 stars⭐⭐⭐⭐
His Secret Starlight Baby is several romance tropes that come together for an absolutely charming story. Jordan and Cory are likable characters and they fit so well together that you just can't help but root for them. Add in a sweet baby, and I was hooked. The secret baby certainly puts a different spin on the pretend relationship trope, and it worked well for this story. This is part of a series, but it works as a standalone. It's a completely engaging story - the romance is sweet, the characters are interesting, and it was just a great way to while away a few hours on a rainy afternoon.
🞿🞿🞿🞿🞿

Add HIS SECRET STARLIGHT BABY by Michelle Major to Goodreads.

Cory needed a fresh start like she needed her next breath.

Jordan went back to locking the door, and if it weren’t for that initial rigidity and the tension currently radiating from him, Cory might have thought he hadn’t heard her greeting.

When he turned, she realized what a fool she’d been—nothing new there. Jordan’s pale green eyes blazed with an emotion she couldn’t name, although it definitely wasn’t friendly. Not that she expected a warm welcome back into his life, although she had to admit, in the two and a half days it had taken to drive halfway across the country, her mind had wandered down the path of silly fantasy more than once.

She fisted her hands, the sharp pain of nails stabbing into the flesh of her palm a much-needed reminder to stay grounded in reality. Cory was in Starlight to take care of business, not to indulge in ridiculous daydreams. Single moms didn’t have time for that sort of nonsense.

“How are you?” she asked, clearing her throat when the words came out on a croak. She tried for a smile. “It’s been a minute.”

“What are you doing here?” He pocketed the set of keys and rocked back on his heels. His eyes raked over her in a way that left her wishing she hadn’t forgotten her flat iron back in Michigan. Or had she deserted that particular styling tool when she’d taken off from Atlanta? She hadn’t given much thought to making herself look pretty in what felt like ages.

Jordan stared at her like she’d lost her mind.

“I didn’t know if you’d remember me.” She pushed away a stray lock of hair that blew into her face. “I’m sure you want to—”

“I remember, Cory.” His voice was a deep, angry rumble. “I remember everything.”

She swallowed. “Oh. Okay, well, that’s good. I think.” She gestured to the bar he’d exited minutes earlier. “You own this place, right? It looks nice.” She inwardly cringed at her inability to stem the tide of inane babble pouring from her mouth. She wasn’t here for pleasantries but couldn’t quite bring herself to get to the point.

“It’s after midnight.” He ran a hand through his thick hair. She still couldn’t see its true color, but it was longer than he’d worn it when he’d played football in Georgia. Untamed and a bit wild, much like the man himself.

“Right.” She took a slow, steadying breath. “I need to talk to you, Jordan.”

“It’s about what happened when you left.”

“From what I saw on ESPN, Kade got one hell of a contract offer. Forty million for four years. He got it all. You both got exactly what you wanted.”

She winced at the accusation in his voice, even though she deserved every bit of judgment and condemnation Jordan Schaeffer could dish out. “Kade and I aren’t together,” she said, as if that explained everything when it was only the tip of the iceberg.

“Not my concern, Cory. In fact, right now my only concern is getting home and into bed for a decent night’s sleep. I wish you well in whatever you choose for life after Kade Barrington, if you’re telling the truth about that.”

“I never lied,” she said, trying and mostly failing to keep the pain out of her voice. Trying and completely failing to stop an image of Jordan asleep in bed from filling her mind.

Cory sucked in a shaky gulp of air, because she could have sworn she heard an answering pain in Jordan’s tone. That couldn’t be possible, because…

“After you took off.” She bit down on the inside of her cheek until she tasted blood. “You left without even saying goodbye.”

He laughed, a harsh scrape across her fraught nerves. “Sweetheart, we barely said hello.”

Oh no. He wasn’t going to do that. Not now. Not after everything Cory had dealt with in the past year. She might have had only one night with Jordan, but it had meant…something. To her, it had turned out to mean everything.

Her gaze darted to the gas guzzler her grandmother had given her before she died last month, and Cory was tempted to walk away. She could climb back in the car, spend one night in the local inn where she’d rented a room and be on the highway by first light.

Then she looked at him again, at those unique eyes she saw staring back at her every day, and realized she had to see this through. If not for herself, then for her baby.

“We said plenty,” she told him, straightening her shoulders. “We did plenty. Enough that I have a six-month-old son in that car.” She hitched a finger at the Buick. “You have a son, Jordan.”

USA Today bestselling author Michelle Major loves stories of new beginnings, second chances and always a happily ever after. An avid hiker and avoider of housework, she lives in the shadow of the Rocky Mountains with her husband, two teenagers and a menagerie of spoiled furbabies. Connect with her at www.michellemajor.com.