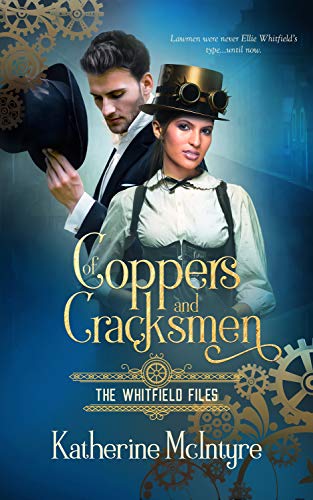 When Ellie Whitfield’s accused of a crime she didn’t commit—though she’s committed many—only one man believes her. And he’s the unlikeliest man as well—Detective Bernard Taylor. He’s a handsome chap, but lawmen were never her type. At least, until now…

Bernard Taylor’s hunting down the Butcher of Broad Street, and though Ellie Whitfield’s led the coppers on a merry chase through Islington too many times, the woman’s no cold-blooded murderer. As they work together, he can’t help but be charmed by the vivacious Ellie, and before long, heated glances turn into something more explosive.

However, the closer they get to solving the murder, the deeper the serial killer draws them in—one misstep and they might be his next victims.

Momma Says: 5 stars⭐⭐⭐⭐⭐
I had never read steampunk and didn't even know if I'd like it until this series. I did know that I like Katherine McIntyre's storytelling, and as it turns out, I like her take on steampunk as well. This second book in The Whitfield Files is another enemies to lovers romance. Well, kind of. Bernard and Ellie aren't so much enemies as they are on opposite sides - opposite sides of the law. If you read the first book in the series then you'll be familiar with Ellie. She's not the main character in that one, but she does play an important part. This one has Ellie front and center as she and Bernard work to catch the Butcher of Broad Street, The thief and copper may not seem to have much in common, but they do have some terrific chemistry, and in addition to a sexy romance, this pair also takes us on a suspense and danger-filled adventure, This story features a different couple than the first book, but there are elements of an ongoing storyline. That said, the author does give us enough to understand any references to book one - though I'd recommend starting at the beginning because these are some terrific characters. 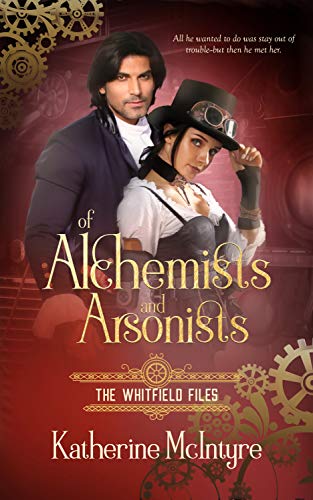 In setting up his apothecary emporium in Islington, Nate Whitfield knew he’d be facing all manner of cracksmen and scum—after all, his cousins were once a part of that underworld. However, when a stunner of a woman bursts into his shop to hide from her former gang, he can’t help but offer shelter.

Isobel Griffiths, an arsonist with a knack for setting blazes unseen, has wanted her freedom ever since her parents sold her to notorious gang leader Jack Blair. Drawn into Isobel’s whirlwind, Nate is soon smitten…as is she.

Belle’s clever, but to escape Blair’s clutches, she’ll need more than wits—she’ll need Nate’s alchemy. And if their plan doesn’t succeed, it could spiral into a gang feud deadly enough to tear all of Islington apart.

Momma Says: 5 stars⭐⭐⭐⭐⭐
I can always count on Katherine McIntyre to pen a story that I can get lost in, and this exciting series has given me three of them. This third in the series features Belle and Nate. Nate is a cousin to Ellie and Theo from the first two books in the series, and Belle is trying to escape the clutches of Jack Blair, who has already starred as a bad guy in the series and is back to be hated once again. Good or bad, love them or hate them., Katherine McIntyre does characters wonderfully. Not only does she give us characters that feel real enough to leap off the page, but we also bet scenes that are so vivid, you can see them. Yes, this is historical fiction and steampunk, so it's not exactly realistic, but this author makes it feel that way. Like the first two books in the series, we get excitement and adventure, and a couple you just can't help but root for, which is just as I expected. All in all, Of Alchemists and Arsonists is another get lost in the pages book, absolutely perfect for a bit of escapism in this crazy world.