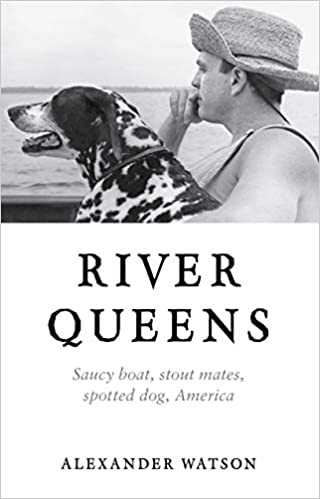 The river-any river-is another planet, with its own language, rules, and culture. River Queens is a story of the unlikeliest of fellows (and a dog) coming to the river-and what happens to them once they arrive. At first glance, it seems to be a how-to manual for any adventuresome (but perhaps foolhardy) type who's ever thought of restoring a wooden yacht and sailing it halfway across the country. Second glance, however, shows that it's a classic travel narrative in which two intrepid (but perhaps foolhardy) explorers head out to tour what is usually called "a distant, alien world." To Alexander Watson and his partner, Dale Harris, the river is as exotic as any foreign locale they'd previously traversed. There is danger, of course- unpredictable nature, lurking water hazards, quickly rising human squalls but the initial difficulty is language: can they become fluent in the argot of harbormasters, helmsmen, navigators, and the various deck hands, skippers, and swabbies? The language of river people is gloriously colorful and idiosyncratic, and Watson has a gift for capturing it. River talk is the animated essence of River Queens, in which these typically hard-working people are rendered so specifically, in all their salty humanity, that they become a kind of tribe, passing Watson and Harris along from outpost to outpost, encumbered by their hospitality. This is the genius of River Queens, in which Watson's sensibility is so adroit that he captures perfectly the two sides of America that seem elsewhere on permanent outs. Here on the river, though, they become assembled in a near-perfect unity, displaying a charity that seems to be missing on the inland geography. With happy authority and never a condescending glance (well, only where one is deserved), Captain Watson gives us a striking, often hilarious picture of river life, elevating its savvy inhabitants into the first rank of admirable Americans and showing us finally how little divided America actually can be. River Queens is at once a romance of men and the river, a fantasy come to life, an unparalleled adventure story, one of the best travel journals around and a glad picture for our turbulent times.

Momma Says: 5 stars⭐⭐⭐⭐⭐
So, it's safe to say that memoirs are way outside my wheelhouse, but there was just something about River Queens that piqued my interest. The very idea of just hopping on a boat and traveling the river brings to mind the days of taking a leisurely drive with the family or a walk around the neighborhood, seeing what you can see. It certainly takes me back a few years to when everyone waved or greeted in passing; it made me a bit nostalgic.
Now, on with River Queens. I'll say again that I don't typically read memoirs, but that's the thing - I didn't really feel like I was reading a memoir. Alexander Watson is without a doubt a talented storyteller. I was thoroughly caught up in the journey, the colorful characters these men meet along the way, and the places and sights they found as they traveled. There's even a map to follow their route, and I loved that they ventured up around my neck of the woods.
I try to step outside the box and explore new to me genres as often as I can. Sometimes it works out, sometimes it doesn't - this one definitely worked out. I don't know if I'll pick up another memoir anytime soon, but I'm sure glad I read this one. So, if you're looking for something different or just looking for a good book to fall into, I'd suggest this one.