Edgar Tobias works as a freelance computer programmer in the city of Anver. Desperate to escape his deceased fathers’ fame as a hit singer-songwriter duo, he left the city of Kasyova and the arts behind. He doesn’t know he’s about to be targeted in a vicious murder game where the prize is a million dollars in cryptocurrency to the first person who can capture his murder on video.

Reis Asher lost everything in the Anverite civil war ten years ago, including their mother. Their father created the agreement known as Unification, which joined Anver and Kasyova to create the Twin City-States of Anver-Kasyova, ending the civil war and ushering in a new era of peace and prosperity.

When they discover the Killing Game, they know that it represents a threat to everything they hold dear and set out to stop it. But powerful forces are at work that refuse to be undermined by one stubborn soul and their sense of justice.

Someone wants Edgar dead, and they’ll stop at nothing to see him six feet under… even if that means Reis and other innocent bystanders get caught in the crossfire.

Edgar Tobias woke to the irritating beep of his alarm, the three-tone pitch loud enough to rouse even the dead from their slumber. He fumbled for the clock with blurred vision and shut it off before pulling himself up to a sitting position to avoid the temptation of snoozing. He looked at the blinds covering his window, and the lack of light told him it was still dark outside. It was always hard to get out of bed in the darkness, but when he needed to start working early to make ends meet, he had to use all his willpower to make sure he didn’t spend all his waking hours beneath the covers.

Thankfully, his computer provided much-needed motivation by choosing that moment to light up, informing him of several unread e-mail messages that might be from his freelance clients. Edgar peeled back the blankets to reveal his naked body and climbed out of bed. He padded across the carpet to his desk. There were a surprising number of new contract offers, given he’d only started freelancing a couple of weeks ago. People wanted mobile applications and they were willing to spend a good amount of cryptocurrency to make their ideas come to life—without having to waste time learning a programming language. Yeah, quitting Central had been the right thing to do. When it became clear his manager wasn’t going to allow a promotion unless Edgar went on a date with him, it was obvious the only way for Edgar to restore his self-respect was to quit and go into business for himself.

Sensing a long day ahead of him, Edgar grabbed the bath towel slung over the back of the chair and headed into the bathroom. Cool water always refreshed him, and it had the desired effect—until it became scalding hot without warning. Edgar backed up, uttering a curse. He was covered in lather, and the last thing he wanted to do was call the maintenance manager while he was naked and soaped up… Bad enough Chris always gave him the eye when he came to work on Edgar’s aging refrigerator. Edgar suspected his interest was why he’d never received a new one in the building’s annual budget. Chris wanted to keep making repairs and inventing excuses to see him.

Edgar shut the water off and walked into the kitchen. He turned on the faucet to find the water was scalding hot there too. Someone had cranked up the water thermostat to beyond safe levels. It seemed like a strange thing to happen, but it could have been a perfectly routine malfunction down in the boiler room. He was a programmer, not a plumber. He poured the hot water into a bowl and added ice from the fridge’s ice maker to cool it off. Back in the bathroom, he washed the suds away with the water until he felt clean enough to dry off with a towel. That inconvenience resolved, he dressed in jeans and a T-shirt before dialing the number for the maintenance manager.

“Chris? Yeah. The water’s boiling. You might wanna check out the stoker before it explodes… I don’t see why you need to come up here for that, but go ahead… Yeah, I’m here right now.” Edgar cut the connection, releasing a sigh. Of course, he wanted to make a house call. Edgar hadn’t realized Chris was so desperate to see him he’d burn his skin off for a visit, but he could tolerate the guy’s presence if it meant the issue got fixed.

Not five minutes later, the apartment echoed with a hollow knock. Edgar closed his e-mails and wandered to the front door. He let Chris in and shut the door behind him. The skinny blond man had been an excellent building manager for years, and despite his annoying swooning over Edgar, he had to admit he liked the fact Chris was friendly, charming, and knew his way around plumbing and heating systems like a pro. While people in Anver often had to deal with slum landlords and half-assed repairs, Chris had always kept his apartment feeling like a luxury pad for half the price a professional usually paid.

“Hey, Chris.” Edgar greeted him first, surprised he walked past him without a word. He looked a little pale as he headed to the bathroom and proceeded to throw Edgar’s clothes out of the closet so he could get to the pipes.

“Sorry. I probably should have taken care of that, huh?”

“It’s no big deal.” Chris moved a large box of sweaters out into the hallway. Edgar noticed a clip-on camera on the pocket of his overalls.

He raised an eyebrow. “They’re making you wear those for house calls, now?”

“No,” Chris said. “I wanted to wear it. The guy down in 2B was creepy as hell last time I was down there.”

“I hope you’re not wearing it because you think I’m creepy.” Edgar took a step back to give Chris some space. “If I’ve done anything inappropriate over the years, please tell me so I can never do it again.”

Chris laughed. “I wish you would do something inappropriate! Why do the good guys have to act like celibate priests? You’ve got the bad boy look; can’t you follow up on that rogue-like charm with a good come-on?” He took a hammer to the one pipe that looked like it was in perfectly good shape, confirming Edgar’s suspicions he was here just to see him, as usual.

“I’m not your type,” Chris pointed out. “In that we’re both bottoms. A tragedy if I may say so myself.”

Chris stood, the mirth draining from his face. “There. I need to check the stoker in the basement, and you’ll be good to go. Want to come check it out with me? I’ll need someone to hold the flashlight.”

Edgar opened his mouth to say no, he had a lot of work to do, but a hint of something in Chris’s eyes made him not want to say no. It wasn’t attraction or anything of the sort. Chris seemed sad all of a sudden, as if a black cloud had blotted out the sun. Was he really so smitten with Edgar, or had his ego finally inflated out of control? Regardless, it seemed cruel to make excuses. Especially if that creeper from 2B was hanging around downstairs.

“Okay. Let’s go.” Edgar followed Chris out of the apartment. They stood in silence as the elevator arrived, and then once again as it descended to the basement level. It chimed, doors opening into a dimly lit passageway. A striplight flickered off and on, struggling to cling to life. A shiver passed down Edgar’s spine and he had to fight the sudden urge to leave Chris and go back upstairs. Instead, he forced himself to walk forward until the elevator doors closed behind him.

“Here.” Chris pressed a flashlight into his hands, and he turned it on. Green tile covered the walls, a remnant of the building’s past as a hospital. After Unification, Anver had found itself with a surplus of hospitals and a shortage of housing. It had made sense to turn some of the towering glass structures into homes. The bomb-proof glass—a remnant of the war—held the heat in nicely.

The huge industrial furnace clanked and groaned as they stepped into the stoker room. Chris looked at the dial and sighed. “Someone’s been messing with the heat. I told Kristoff we needed a lock on this door. You know, I love Kasyovans, but it’s a pain in the ass when they’re too busy with their next show to deal with their obligations.”

Edgar vaguely recalled the building’s owner saying something about being in a band, but only answered with a grunt. He was ready to get out of here and get back upstairs, where heavy thoughts like loneliness could be buried under a pile of work.

“Hey, Edgar. You ever hear of the Hunt or the Committee?” Chris asked.

“The what or the who?” Edgar narrowed his eyes. “Not a clue what you’re talking about, I’m afraid.”

The flashlight began to flicker in Edgar’s hands, throwing them into momentary gloom as the battery signaled its imminent death.

“I think we should hurry up and get out of here,” Edgar said.

“Are you afraid of the dark, pretty boy?” Chris mocked.

“Don’t call me—” Edgar’s complaint was cut off by a force constricting his air supply. It took him a moment of alarm to realize he was being strangled with a rope from behind, its owner pulling back almost hard enough to snap his neck. He swept out with his leg and took his assailant down, grateful for the trick he’d learned in Kasyovan conscripted military service. The rope loosened and he was able to crawl free, gasping for air.

“Shit!” The voice was unmistakably Chris’s.

“What…the…fuck!” Edgar yelled, reaching for his throat and coughing until tears swam in his eyes. The rope burn would leave a mark, but if Chris was his assailant, he wasn’t safe yet. He fled toward the light, leaving the boiler room and running along the dim corridor. He pushed the instant need for a reason away and concentrated on hammering the call button for the elevator. When it arrived, he entered and immediately hit the close button, aware of Chris racing toward the doors…

They shut completely with a thud and a chime. Edgar slid down the wall, horrified and perplexed, as the elevator ascended. Had Chris tried to kill him?

What in the Twin City-States was going on? 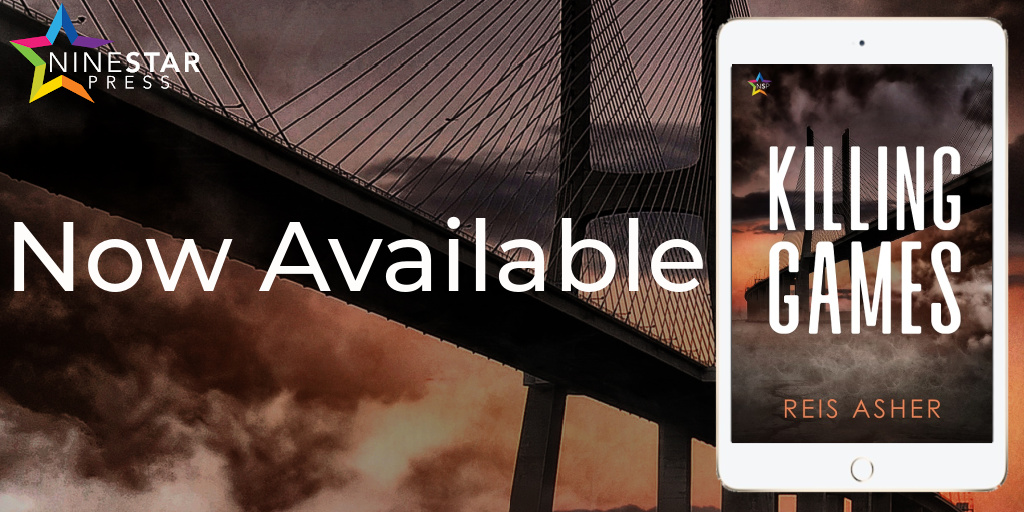 Reis Asher (he/him) is a transmasculine author living in rural Pennsylvania with his husband and four cats. He loves video games, reading, technology, and of course, writing. He enjoys shining a spotlight on queer characters and their adventures in a diverse range of worlds, from the fantastical to the everyday. Catch him on Twitter where he’s happy to interact.