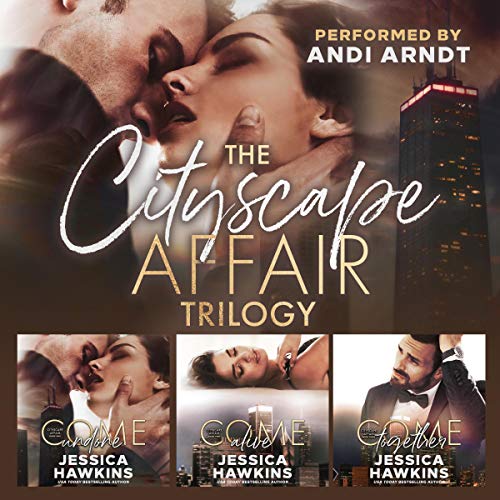 For the first time, listen to all three books in the Cityscape Affair series in one collection. Performed by Andi Arndt.

David Dylan, alleged playboy and Chicago’s most eligible bachelor, awakens a passion in Olivia she buried long ago. He’ll do anything to prove to her that despite his playboy ways, he’s worth leaving behind the stable future her husband can offer her.

But in order to accept a love she never thought possible, with a man who could be her soulmate, Olivia will have to let go of deeply rooted fears that could ruin everything.

Everything is what David wants to give her, and it’s what he demands in return. But even as an alpha male who always gets what he wants...this time, David may be fighting for something unattainable.

Momma Says: 3 stars⭐⭐⭐
If you believe in kismet, if you've found the one, then you can understand the magnetic pull between Olivia and David. Now, that's not to say I buy into the complete obsession they seem to have even before David knows her name, but this is fiction, so we'll go with it. I mean, I wouldn't be thrilled with any of these characters if it were real life - well, except maybe Brian and Gretchen, but that's another story - but that's the beauty of falling into a book.
And here's where I tell you that I didn't really like most of these characters in the fictional world either. There were so many times when I really, really disliked one or more of these characters. Of course, there are a couple we're not supposed to like, but I'm talking about our big three in this love triangle. I went back and forth so many times. One minute I would be sure that Olivia didn't deserve either Bill or David because both treated her far better than she deserved. Then, one or the other would act like a big ol' jerk and I'd be sure she needed to be with the other. Then, I'd be sure she should just walk away from both. Oh, wait! Then there were the times when I'd be all about Olivia and David, but I'd feel so sorry for Bill.
The funny thing is Olivia is the one who pushed my buttons the most. Bill and David had their moments, but I could get behind some of their actions. David is arrogant and overbearing, but he put Olivia's safety above anything else. Bill - well, Bill was an odd one. I didn't like some things about him, but when things took a turn, I kind of feel like he got a raw deal. He's kind of painted in a bad light, and he had his moments, but I could understand his anguish and his need to lash out. But Olivia was an exercise in frustration. She's an absolute mess, and her back and forth drove me to distraction- then after a while, it annoyed the daylights out of me. Her inner monologue of indecision is the biggest drawback of this one, at least for me. I mean, I understand the reasons for some of it, but how much did this guy have to do to show her he meant business?
Needless to say, the angst level is through the roof. So much so that I had to step away a few times, read something fluffy, then come back. The audio for the trilogy is somewhere around 30 hours. That's a lot of angst.
Now, any of that could easily cause me to lose interest, but I just couldn't completely walk away from this story. Whether it was the characters or the need to know how it would all play out or that the author is just that good, I was all in, and I had to keep going. So, yes, I did step away, but I came back every single time. And I have to say that David and Olivia were absolutely scorching hot together. Like hot enough to set the curtains on fire, and there was no cooling off for them either. So there is no shortage of passion in their story.
Andi Arndt narrates the trilogy, and she does it superbly just as I expected. I've yet to be disappointed in her performance on any audio, and she doesn't disappoint here either.
All in all, this trilogy had its ups and downs for me. There were things I liked and things I didn't, but it was still well worth the listen. I did have to set it aside and take a breather now and then, but angst and all, Jessica Hawkins paints characters who get under your skin.