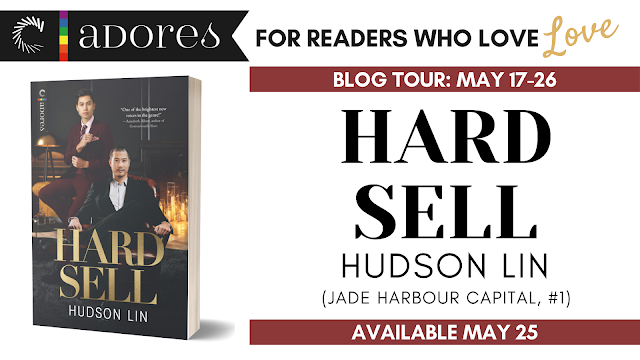 Hard Sell by Hudson Lin is available in eBook, trade paperback and audiobook formats on May 25th! 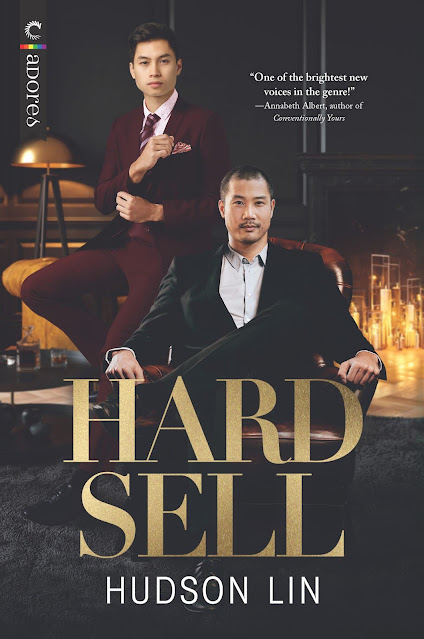 Danny Ip walks into every boardroom with a plan. His plan for struggling tech company WesTec is to acquire it, shut it down, and squeeze the last remaining revenue out of it for his Jade Harbour Capital portfolio. But he didn’t expect his best friend's younger brother—the hottest one-night stand he ever had—to be there.

Tobin Lok has always thought the world of Danny. He’s funny, warm, attractive—and totally out of Tobin’s league. Now, pitted against Danny at work, Tobin might finally get a chance to prove he’s more than just Wei’s little brother.

It takes a lot to get under Danny’s skin, but Tobin is all grown up in a way Danny can’t ignore. Now, with a promising patent on the line and the stakes higher than ever, all he can think about is getting Tobin back into his bed—and into his life for good.

If only explaining their relationship to Wei could be so easy…

Add Hard Sell to your Goodreads!

Momma Says: 3 stars⭐⭐⭐
Hard Sell is a male/male, best friend's brother, workplace romance with a few other things thrown in. Now, I won't pretend to understand all the business stuff going on here, but it wasn't completely over my head either. Our romantic couple, Danny and Tobin, do have chemistry, but it took some curtain-parting to really get a feel for that. What I mean, is the story gets a bit busy with the business stuff and subplots, and the relationship gets a little lost. Not completely, though, and once I got invested, I wanted to see how their relationship would play out. I will say that some things in this one ventured toward darker tones, so that's something to keep in mind. I like dark and gritty storylines, so that didn't bother me, it just felt a little out of place in this setting, I suppose. In the end, there were things I liked and things I didn't, but the good far outweighed the bad for me, and I ended up really like this couple. This is the beginning of a series, and I am interested to see where things go from here. 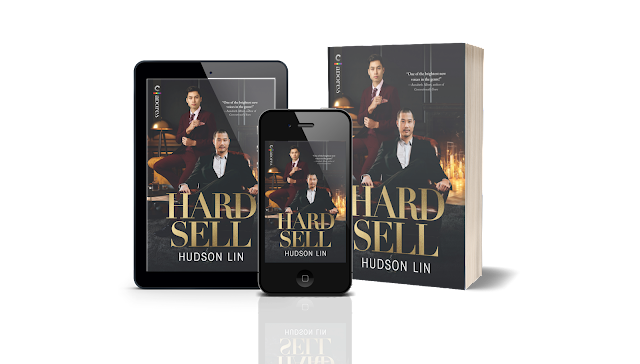 Danny adjusted the watch on his wrist as he headed out. If only he didn’t need a win so god damn badly. He would love to march back into the meeting room and rip up the offer right in front of Cyrus West’s face. What smarmy remark would Cyrus have then?

Unfortunately, Danny did need a win and, even more unfortunately, WesTec was his best shot. Maybe his last shot. Jade Harbour’s financial backers were starting to notice that his once stellar track record wasn’t looking so stellar lately. His ass was on the line, which left Danny with very few options.

Outside, he stopped, still vibrating with adrenaline from the confrontation.

“That was pretty badass.” Tobin looked back through the doors they’d exited, as if Cyrus was going to come bursting through them at any minute.

Perhaps it was, but Danny saw no reason to take pride in it. His job was to close deals and sometimes the sellers needed a little encouragement.

Tobin turned to him, and suddenly WesTec and Cyrus West didn’t matter anymore.

Was he dreaming? Was Tobin really standing in front of him? Chubby cheeks had given way to sculpted cheekbones. A bit of acne scarring on his skin made Tobin look even more adult. He held himself with such self-assurance; like he’d grown into too-big clothes that now fit him just right. He was striking. He would turn heads when walking down the street. Danny’s body certainly made its interest known.

Danny took a step backward, needing the extra foot of distance between them. Seven years ago, he had succumbed to Tobin’s appeal. There may be years and geography between them, but one thing hadn’t changed. Tobin was undoubtedly special.

Did he remember that night as vividly as Danny did?

A shy smile tugged at Tobin’s lips, as if he’d read Danny’s mind, and Danny couldn’t help but return it. It didn’t matter what Tobin did or did not remember. They were…childhood friends, practically family, connected in a way Danny didn’t have words for. It’d been too long since they were in touch. No matter their reasons for drifting apart.

“Are you free for dinner tonight?”

definitely, totally. Uh…” He patted his pockets. “Shit. I think I left my phone upstairs.”

Danny reached into the inner pocket of his suit jacket and pulled out a business card. Always be prepared. “Here. Give me a call when you’re done, and I’ll send a car around.”

Tobin took the card and ran a thumb over the embossed letters, as if committing them to memory. He clutched the card in his hand. “Oh, I, uh… I can meet you wherever.”

Tobin looked a little taken aback, almost as if he was going to put up a fuss. But then he chuckled and nodded. “Okay, sure. I guess I’ll give you a call when I’m done.” He held up the card in a wave as he walked backward toward the doors. “See you later.”

Danny nodded and watched Tobin go. At the building’s main entrance, Tobin stopped and glanced back at Danny as if checking to make sure he was real. 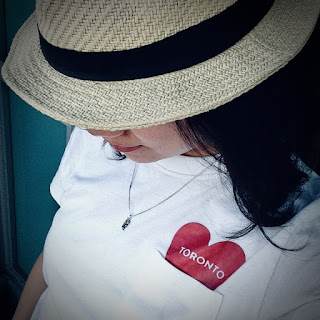 Hudson Lin was raised by conservative immigrant parents and grew up straddling two cultures with often times conflicting perspectives on life. Instead of conforming to either, she has sought to find a third way that brings together the positive elements of both.

Having spent much of her life on the outside looking in, Lin likes to write stories about outsiders who fight to carve out their place in society, and overcome everyday challenges to find love and happily ever afters. Her books are diverse romances featuring queer and disabled people of color.

When not getting lost in a good story, Lin hosts a podcast, interviews queer people of color, and a does bunch of other stuff.