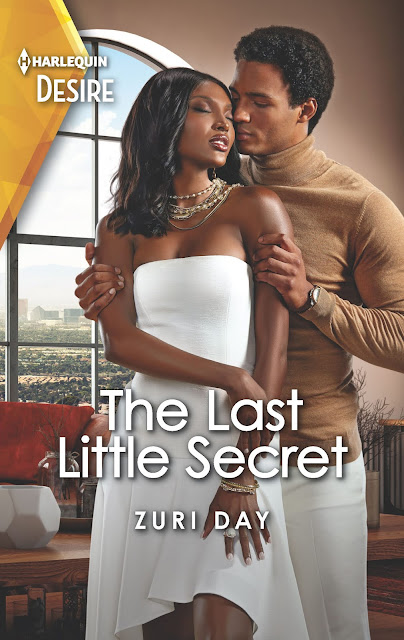 Will a secret child stand in the way of business? Find out in this Sin City Secrets novel by Zuri Day.

Is she willing to risk it all

for one more night with the boss?

Thanks to a year-long hiatus, interior designer Samantha Price is desperate for a new project. But the only client she can land is Nick Breedlove, a former one-night stand who’s dominated her fantasies ever since! The real estate billionaire agrees their partnership is strictly professional—even as his flirting promises more. If Sam gives in to their passion…will Nick learn the truth about their baby son?

Add The Last Little Secret to your Goodreads!

Momma Says: 3 stars⭐⭐⭐
The Last Little Secret is about just that: a secret. Well, a secret baby. Of course, that means it relies on miscommunication, and that can go either way for me. In this case, Zuri Day has penned an engaging and fun romance that was great for whiling away a rainy afternoon. Sam and Nick have good chemistry, and they're a couple you just want to see together. I didn't realize that this was part of a series until I started reading it, but I didn't have any problem following this one. I did notice a few secondary characters that I'm interested in reading more about, so I'll have to check out those earlier books.
🞿🞿🞿🞿🞿

“While in Africa, I lived in a rather insular world.”

“Since word on the street is you married a prince, a luxurious one, no doubt.”

A physical wall couldn’t have made Sam’s intentions clearer. Whatever had happened while abroad, she didn’t want to talk about it. But Nick couldn’t resist.

“Yet you’re back here and working. What does your husband think about that?”

“It doesn’t matter. We’re no longer together.”

The tone beneath that one word closed the door on the subject of Sam’s personal life better than King Tut’s sealed tomb. It only made Nick even more curious, about both her failed marriage and her current love life. Now was obviously not the time to talk about it, but one day… Patience was not a virtue Nick knew well, but one he could employ when necessary. Now was definitely one of those times.

His body language remained relaxed but he adopted a businesslike tone. “Whatever brings you back to Las Vegas, your timing couldn’t be better. I need the best and fastest-working designer that money can buy. Before running off to become an African princess, that was you.”

A grin accompanied Sam’s twinkling eyes. “I’d like to think it still is. What’s going on?”

“A project that has to stay on schedule and a designer who isn’t delivering on the promises she made.”

“How many rooms are we talking about?”

“Not rooms…homes.” Nick noted Sam’s surprised expression. “This isn’t a hotel design. It’s a series of private island homes being advertised for vacation rental among the world’s most elite.”

“Wow. I had no idea you guys had expanded beyond the original hotel framework. Considering how the hospitality industry is changing, though, it sounds like a smart move.”

“It’s proven to be right on time with industry trends.”

“Does that smirk confirm the obvious, that this was your idea?”

“Takes one to know one.”

“All of the brothers are involved but yes, it’s more or less my baby. Which means failure is not an option. You feel me?”

Sam leaned forward, unconsciously revealing the slightest peek of a creamy quarter-moon of her breast. When his attention returned to her face, Sam was frowning. Damn. To her professional credit, however, she didn’t comment on eyes determined to rove on their own. She simply adjusted her blouse and sat back, waiting, to learn why Nick had brought her here.

Nick leaned back as well, determined to take control of a meeting he’d called, ensconced in the comfort of discussing an industry he knew better than he knew himself. Business now, pleasure later, he thought as he began discussing his baby, CANN Isles. There was no way around it, even pushed to the back of his mind. The attraction for one Ms. Samantha “Sam” Price was real, intense and not going away.

Before it was mere speculation. Now she was sure. It shouldn’t have mattered how much she wanted to see her old lover. Not only should Sam have not returned Anita’s phone call, she shouldn’t have made this appointment. She shouldn’t be here with Nick. Her body was clear about it even if her mind wasn’t sure. Every cell of her body had lit up, awakened by the irrefutable attraction that hadn’t dimmed in all this time away. An attraction that given the sticky situation that even thinking of working with Nick presented, and the increasingly troublesome email and text exchanges with her ex, had no chance of being acted upon.

Being this close to him in proximity was TROUBLE, all caps. Just seeing him relax made her heart skip. She watched the lines on his forehead fade away as he broke into a spiel he’d probably recited a hundred times. Clearly, speaking about the company was his forte, his stomping grounds, his zone. But that brief look of desire she’d glimpsed before Nick realized he’d been caught staring at her cleavage suggested something impossible. That he still felt the attraction, too.

Award-winning author Zuri Day snuck her first Harlequin romance from her older sister’s collection and was hooked from page one. Knights in shining armor and happily-ever-afters spurred a lifelong love of reading. Zuri now creates these stories as a full-time author. Splitting her time between the stunning Caribbean islands and southern California, and always busy writing her next novel, Zuri still loves to connect with readers via Zuri@ZuriDay.com.