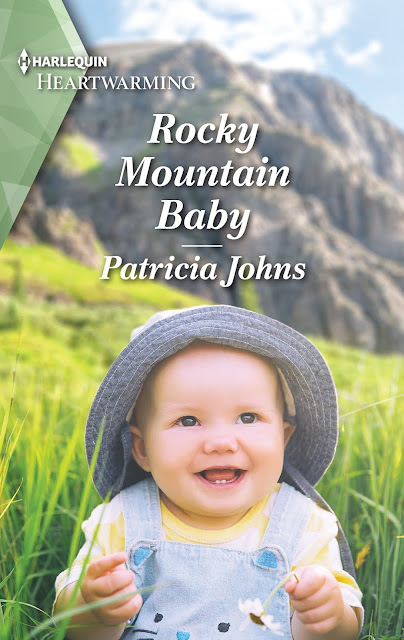 A baby on the way…

Will turn their lives upside down!

Taryn Cook is pregnant with her own miracle baby, and she’s perfectly happy to be a single mom. Then she’s reunited with the baby’s father, Noah Brooks, at her new job in Mountain Springs. Noah never planned on being a dad, but he’s determined to be there for his son…and Taryn—even if that means being just a friend to the woman he’s falling for.

Momma Says: 4 stars⭐⭐⭐⭐
Rocky Mountain Baby is such a heartfelt story, and that cover is absolutely adorable! Surprise baby storylines aren't my favorite trope in the genre, but I like how this one plays out. Even the conflicts between Taryn and Noah tug at the heartstrings. This is the third book in The Second Chance Club series, but it works well as a standalone - at least it did for me. That said, these characters, including the secondary ones,. are engaging and likable, so I'm feeling like I need to add the first two books to my TBR pile. This one is a well-written, sweet romance that was just what I needed for a pleasant weekend read.
🞿🞿🞿🞿🞿

The door opened and a tall man stepped inside. He was broad shouldered, lean and looked to be in his early forties with just a touch of gray at his temples. A pair of glasses set off his slate blue eyes. He wore a pair of gray dress pants and a crisp, white button-up shirt without a tie. His belt looked expensive. He hesitated when he saw her, and his gaze dropped down to her belly.

“This is our general manager, Noah Brooks,” Angelina said. “I asked him to come by and meet you. You’ll be working quite closely with him for the next couple of weeks, and he’s a fount of knowledge for everything from operations to food and beverage.”

“Of course,” Taryn said, and she rose to her feet and shook his hand. “I’m Taryn Cook with Cook Marketing.”

Noah released her hand and gave her a nod. That seemed to be a common name these days. She’d met another Noah not too long ago…

“Let me show you your office, then,” Angelina said, also rising. “I hope you’ll be comfortable there. If you want any food or drinks delivered to your office while you’re working, just give Janelle a call down at the switchboard, and she’ll get you anything you need. It’s all complimentary, of course.”

“That’s very kind.” Taryn bent to pick up her leather tote, and scooped up the water bottle, too. She’d been advised to stay hydrated at this point of her pregnancy, and in the interest of allaying her obstetrician’s worries, she was following her instructions to the letter.

Angelina led the way out of her office, and Noah gestured for Taryn to go ahead of him. He gave her another strange look. It was very likely her pregnancy. She garnered all sorts of reactions from people. It was amazing the personal questions complete strangers would ask a woman once she was showing. Whatever his opinions, he could keep them to himself.

Angelina headed up the hallway and paused a few doors down, gesturing Taryn inside. The office was small, but furnished with a desk, a lamp, an extra armchair in one corner and another bank of those beautiful tall windows that gave a view of a walking path, some green shrubbery and the clear lake beyond.

“I hope you’ll be comfortable here,” Angelina said. “If there is anything that might help out, just let me or Noah know and we’ll make sure to get it for you. Noah’s office is right next door.”

“This looks perfect,” Taryn said with a smile. “Thank you so much.”

“Now, you mentioned wanting to see the lodge and what we have to offer,” Angelina said. “I have an appointment in about twenty minutes, so I have to head out. But Noah will give you the grand tour. You’ll be in good hands.”

“Absolutely,” Taryn said with a smile. “Thanks a lot.”

Angelina left the office, leaving Taryn alone with the man. He stood in the doorway while she deposited her bag on top of the desk, then pulled out a tablet that was less cumbersome to carry around so that she could take some notes.

Noah said, “This is the key card for your office door. The only one who has access to changing your key card is me or Angelina, so you won’t have to worry about security.”

Taryn crossed the office and accepted the card from him. No wedding ring. She shouldn’t be noticing these things. Less than a year post divorce with a baby on the way, she wasn’t looking for romantic connections. She’d already bumbled in that respect seven months ago—an evening at a pub turning into a romantic encounter that left her pregnant. And that evening had started with her noticing a hand very much like Noah’s with no wedding ring, either. As if a man’s confirmed single status was all that mattered. And ironically enough, that man had been named Noah, too… Except he’d been slimmer and had a rather impressive auburn beard streaked with silver.

Patricia Johns writes from Alberta, Canada where she lives with her husband and son. She has her Honors BA in English Literature and writes for both Harlequin and Kensington books. She loves prairie skies and time with her family.