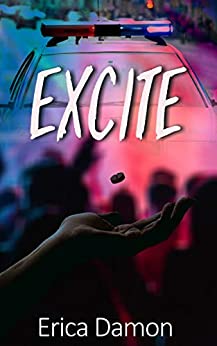 One pill starts a party; how many make a nightmare?Jon is just another dissertation student until the hypothetical drug that he and his partner Isaac are working on turns into a real pill. Except it doesn't do quite what they intended. When they realize that it has the potential to be the next great party drug they are split. Jon's girlfriend Kat is pushing him to take it to the streets but his partner wants nothing to do with it. Isaac just wants to finish their thesis.But Jon can never say no to Kat and together they start showing the little pink pill off at parties. The drug spreads like wildfire through the college campus. It’s almost too easy; the demand keeps rising, the money flows in, and the parties are getting bigger. Can they keep it together or will chasing the high bring them crashing down?

Momma Says: 4 stars⭐⭐⭐⭐
Excite has an interesting premise for a crime thriller, and to be honest, I had my doubts about how much of a thriller it was going to be. Those doubts proved to be unfounded, because once things took off, the tension rose steadily all the way to the end. It wasn't suspenseful in the sense of figuring out a whodunit. We already know the major players from the beginning, so the suspense is in how long are they gonna get away with it? What's going to happen when they get caught? Both questions were kind of hanging around in the back of my mind as I kept reading to see how it was all going to play out.
The story revolves around a hypothetical drug made real and the results of those seeking to profit from it - and I'll just throw it out there that if you're worried about getting lost in the chemistry of creating that drug like I was, you don't need to be. Erica Damon focuses on the aftermath and how the drug affected people. The reasons for creating this "little pink pill" does raise the question of just because you can do something, does that mean you should do it? As the blurb indicates, there turns out to be differing opinions on that.
Those differing opinions and what Jon is willing to do for his girlfriend is where this author's talent really shines. These characters are not all good or all bad. They make mistakes, they make bad choices, they have trouble seeing past the dollar signs - and they find out there are consequences - some that you can't come back from. Some of these characters certainly have a skewed moral compass, and I absolutely did not agree with their actions, but somehow, Erica Damon manages to make me sympathize with the very same characters that I'd really like to shake until their teeth rattle. Maybe it's the age. I mean these are college age new adults, and at the risk of dating myself, I'll admit that the age of the characters brings out the Momma in me.
I'll stop there before I give too much away and just sum it up by saying Excite is an entertaining tale of greed and consequences. The setting, the characters, the premise: it all comes together to keep the pages turning.