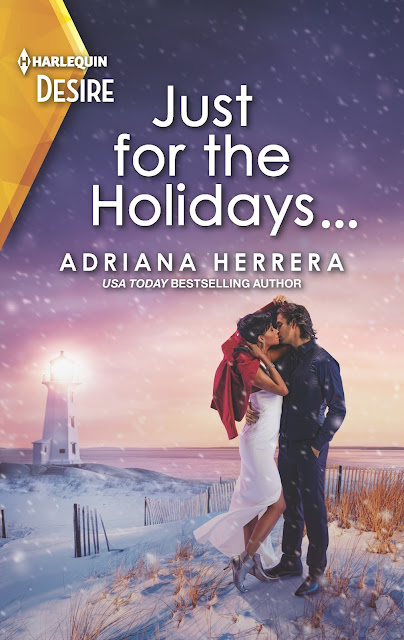 She’s snowed in at Christmas…

with a man she must resist!

Casting director Perla Sambrano knows Gael Montez is the perfect actor for her new film project. As long as she forgets his oh-so-tempting allure and keeps her heart out of it. Because their chemistry’s no act and she needs to be careful…

The Montez men hurt the women they love. Or so Gael believes. Keeping things professional with Perla is the only way to protect her. Until a snowstorm strands them together, leading to an unplanned Christmas fling that lands them both on the naughty list!

Add Just For the Holidays… to your Goodreads!

Buy Just for the Holidays… by Adriana Herrera

Momma Says: 4 stars⭐⭐⭐⭐
Let's see... We have forced proximity, second chance romance, fake dating romance... I think that covers it. Anyway, all three tropes come together for fun, quick read with a couple that's really easy to root for. Gael and Perla are so good together, and their romance is a good combination of sweet and sexy. The story has a good pace that makes it all too easy to read "just one more chapter," until you're turning the last page. I liked the first book in the Sambrano Studios series, but there's just something about this couple that sets this one apart. Adriana Herrera paints such a vivid picture of the setting and the characters that it all comes to life in my head. It's pretty safe to say that I'd recommend this one to anyone who likes a bit of steamy romance to while away an evening.
🞿🞿🞿🞿🞿

Gael leaned back, considering the information his sister had just given him. It was exciting to think about. A series about Francisco Rios, the leader of the Puerto Rican independence movement, was a dream project. The man had led an extraordinary life. He’d graduated from Harvard Law School in 1921—the first Puerto Rican to do so. While studying there he’d met Claudia Mieses, a Peruvian biochemist—and the first Latina to be accepted to Radcliffe College—who was remarkable in her own right. Gael had always thought their love story was a romance for the ages. And that Rios’s life story deserved to be told. Being a part of bringing something like this to the big screen was more than a dream…it was the kind of opportunity that had drawn him to be an actor in the first place.

“I want it,” he said with finality, feeling a buzz of excitement he hadn’t felt in months. “Who do we talk to?” he asked. Hell, he’d probably be willing to do the part for free. But his sister frowned at his question, her expression almost reluctant. When he looked at Manolo, Gael noticed the man looked smug. Clearly, the other shoe was about to drop.

“The studio producing the series is Sambrano,” Gabi blurted out, as if trying to quiet their uncle before he could get the first word in. No wonder the older man was smiling. What felt like a ball of lead sank through Gael. The skin on his face felt hot. He shouldn’t be surprised that the mention of the Sambrano name still had this effect on him after all these years, but it did.

“Tell him who’s in charge of casting, Gabriela.” His uncle sounded a little bit too pleased with himself for that nugget to be anything other than the person Gael suspected.

Gabi fidgeted, her eyes everywhere but on Gael. “Perla Sambrano’s doing the casting.” Unsurprisingly, he felt the blood at his temples at the mere mention of his ex-girlfriend. Perla Sambrano was someone he took pains not to dwell on. “She’s working for the studios now,” Gabi added, pulling him from his thoughts. “She’s their new VP of global casting and talent acquisitions.” His sister’s tone was sharp, laced with recrimination. Perla Sambrano had been the reason for the one and only time his twin had stopped speaking to him.

“I don’t know if this is the right project,” he said, ruthlessly tamping down the pang of discomfort that flashed in his chest. He stared at his sister, expecting her to rehash old arguments. But she just stared at him, disappointment written all over her face. He knew enough not to take the bait. That conversation  as over and done with. He would not apologize for making the choices that had them all sitting in a private jet heading to the ten-million-dollar mansion his money had bought.

“This is not going to work, Gabi,” he told his sister, before turning away from her withering glare. He looked at his uncle and felt a surge of irritation at the pleased little smirk on his face. He was not some damn toy for Manolo and Gabi to compete over. “These aren’t going to work, either,” Gael quickly added, gesturing to his uncle’s pile of scripts. “Let’s keep looking.” That made Manolo’s smile flag, but he wasn’t here to save anyone’s feelings. This was his career, and family or not, they worked for him.

Gabi nodded tersely. She opened her mouth as if to say something, but then seemed to let it go. Gael focused on the book he’d been reading on his phone and tried very hard not to think about Perla or the project.

Dwelling on ancient history was not a habit he indulged in.

Adriana Herrera was born and raised in the Caribbean, but for the last 15 years has let her job (and her spouse) take her all over the world. She loves writing stories about people who look and sound like her people, getting unapologetic happy endings.