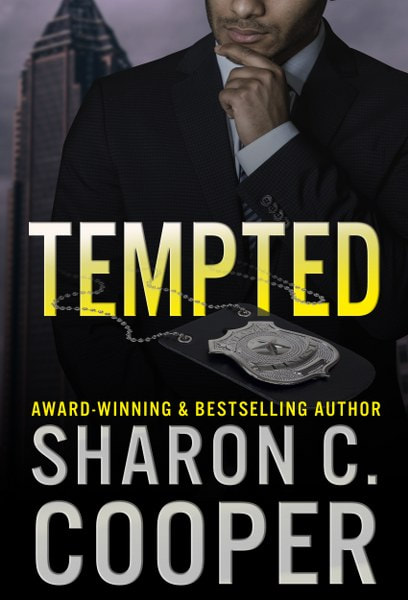 Temptation has a way of complicating things…

Detective Ashton Chambers is ready to quit the police force, but he won’t until he puts the man responsible for his sister’s murder behind bars. No easy task. In fact, the mission is proving to be almost impossible. Though his day job stresses him out, his social life has taken a turn for the better, thanks to a sassy bar owner, Dani Eubanks.

After two broken engagements, Dani is not looking for a happily-ever-after. She tried. Twice. Failed. Twice. Won’t try again. She can’t rely on her judgment, and no way will she allow her heart to get crushed a third time. But Ashton is irresistible, and when a dangerous turn of events puts her in the crosshairs of an international gun trafficker, he’s the only one she trusts with her life…and her heart.

**All books in the Atlanta’s Finest series can be read as standalones.

Dani almost moaned at the sudden neediness that swept through her, and she leaned into his touch. The moment was so intimate but felt so natural as if this was normal for them. That only proved that the immediate familiarity that she had experienced with him when they first met had been real. And at right now, there was no other place she’d rather be than there with him. He always had a way of making her feel special…feel seen.

Wait. What the heck are we doing? Dani wanted to ask but didn’t. She shamelessly liked this dominating edginess that he had going on tonight. More than that, she loved being near him. Her body was so aware of him it practically vibrated with need at his nearness.

And had he moved closer? Or was that just her imagination? Or maybe she’d been the one to move…

Either way, the distance between them shrank, and now she could feel his warm breath against her face. They were close enough to kiss, and it was as if her feet were cemented to the floor.

She should take a giant step back. She couldn’t. No part of her wanted to break this connection, except for maybe her brain.

Was he going to kiss her? Would she let him? One question after another raced through her mind as she watched him watch her.

His hand slid from her cheek, and Ashton lifted her chin with the slightest touch of his fingertip. The smoldering flame she witnessed in his eyes as his gaze zoned in on her mouth was undeniable. It was as if he was silently asking for permission to kiss her.

Dani’s heart pounded like a gong drum, loud enough to be heard down the street. She wanted this, but she didn’t. If they crossed this line, their friendship, or what she considered a friendship, would change.

More than that, it would be even harder to resist him going forward.

But suddenly, the decision was taken from her. Dani wasn’t sure who moved first, but before she knew it, their lips were touching. The kiss started like a whisper against her mouth until Ashton slid a hand behind her neck, and his other went around her waist. He pulled her against his hard, muscular body, and Dani released a moan that pierced the quietness of the room. She fisted the front of his jacket and held on as his tongue slipped between her lips, and he deepened their connection.

Her brain short-circuited as sensations she hadn’t felt in like forever swirled inside of her. Add in his enticing woodsy fragrance and the heat from his hand that rested just above her butt, and she was a goner. Dani could barely think as she savored each lap of his tongue.

Dani froze…then gasped and jumped back as if she’d been burned. Her eyes widened as she stared at Ashton. She felt like a middle-school kid receiving her first kiss and getting caught by the teacher.

Award-winning and USA Today bestselling author Sharon C. Cooper loves anything that involves romance with a happily-ever-after, whether in books, movies, or real life. Sharon writes contemporary romance, as well as romantic suspense and enjoys rainy days, carpet picnics, and peanut butter and jelly sandwiches. She’s been nominated for numerous awards and is the recipient of Romance Slam Jam Emma Awards for Author of the Year 2019, Favorite Hero 2019 (INDEBTED), Romantic Suspense of the Year 2015 (TRUTH OR CONSEQUENCES), Interracial Romance of the Year 2015 (ALL YOU’LL EVER NEED), and BRAB (Building Relationships Around Books) Award -Breakout Author of the Year 2014. When Sharon isn’t writing, she’s hanging out with her amazing husband, doing volunteer work or reading a good book (a romance of course). To read more about Sharon and her novels, visit www.sharoncooper.net