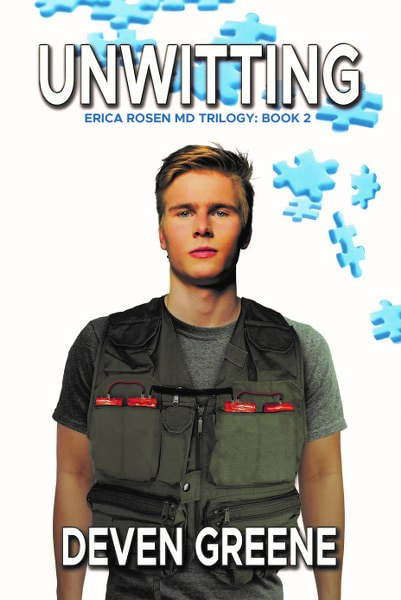 Dr. Erica Rosen’s world is turned upside down after a suicide bomber explodes amidst a large crowd entering Oracle Park baseball stadium, near her San Francisco home. Many are killed or injured, and police have no leads in solving the case.
Erica becomes involved after a teacher of young autistic men calls her. The teacher believes her students are involved in the bombing but is afraid to contact law enforcement. She reaches out to Erica, who has experience with special needs children.
Erica arrives at the school but finds the police already there and a young autistic man doing a jigsaw puzzle, oblivious to his murdered teacher on the floor. The young man has information about the mastermind behind the bombing but has limited ability to speak. Erica is determined to protect him, prevent further bombings, and find his missing classmates.

I remember that afternoon in August, the first time I saw the video of people walking slowly, talking, and laughing, as they entered San Francisco’s Oracle Park baseball stadium. Then a fiery flash. I’ll never forget the slender arm, a silver bracelet around the wrist, flying through the smoke and debris. This was followed by images of dead bodies, bloodied people crying, some being comforted, some comforting others. My assistant, Martha, showed it to me on her cell phone when I was in between patients in the pediatrics clinic at UCSF, where I am director. Martha dabbed tears from her eyes as I watched.

Looking around, I noticed other doctors and staff studying their cell phones. Over the next few minutes, people spoke in hushed tones, put away their phones, then peeled away to finish the day’s work.

I called Lim, my husband of two months, to make sure he was okay, even though he was at work miles away from the disaster. Then I called my best friend, Daisy Wong. I knew she wasn’t a baseball fan, and the probability of her being at the game was close to zero, but during times of danger, one’s mind can imagine all sorts of improbabilities. I was glad when she answered her phone and assured me she’d been home all day as usual, remotely working at her job as a computer programmer.

For the remainder of the day, the clinic atmosphere was subdued as gloom settled in the hallways, work areas, and exam rooms, stamping out the usual noisy cheerfulness exuded by the staff. When I’d finally seen my last patient, instead of catching up on paperwork as was my custom, I looked forward to spending a quiet night at home, finding solace with my new husband. After all, the explosion had taken place at the Willie Mays Gate of Oracle Park, only a few blocks from our third-floor condominium. Lim and I had chosen our unit in the new, modern building for its view of the San Francisco Bay, proximity to interesting shops and restaurants, and relatively low crime rate.

That evening, upon entering my building, I was doubly glad that a passcode was required to open the main door. Although that didn’t ensure complete security, it gave me a modicum of peace of mind. In the lobby, a neighbor told me one of the residents, a young man I knew only enough to smile at and greet should our paths cross, had been injured in the blast. Fortunately he’d suffered only a laceration on his arm from flying debris and was expected to make a full recovery. As I took the stairs up to my unit, I imagined the horror he must have felt in the moments following the explosion. Although his arm would probably heal, I wondered if his psyche ever would.

For the rest of the evening, Lim and I were glued to the TV news as we commiserated over the disaster that had taken place in our neighborhood, thankful we had escaped unscathed. Like most others, we assumed that, like 9/11, it was the work of Islamic terrorists and awaited the announcement by a group proudly claiming responsibility.

I was glad that even though the event took place close to my home, I wasn’t directly affected. Nevertheless, I was nervous walking around my neighborhood and had become a bit obsessed, constantly scrolling through the news on my phone, looking for updates about the bombing. Although I knew people who knew people who were killed, I didn’t personally know anyone who had suffered serious physical harm from the explosion. A few days after the incident, I’d spoken to my neighbor who had been injured and sensed he was deeply disturbed, much more so than he let on. Six days after the bombing, that was the extent of my thoughts about the subject. Until I received a phone call from Brandy Monroe. 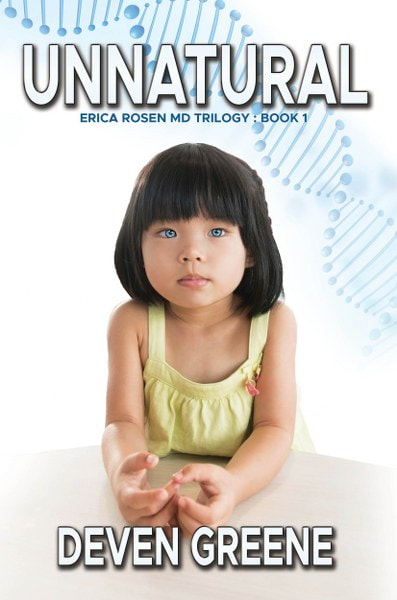 "A fascinating and thought-providing medical thriller about the ethical dilemmas posed by genetic manipulation." –Best Thrillers

Dr. Erica Rosen is perplexed when she sees a young Chinese girl with blue eyes in her San Francisco pediatrics clinic. The girl's mother, Ting, is secretive, and Erica suspects she has entered the country illegally. Later, Erica encounters Ting's son and discovers he has an unusual mutation. Erica learns that Ting's children underwent embryonic stem cell gene editing as part of a secret Chinese government-run program.

The Chinese government wants to murder Ting's son to prevent others from learning about his unusual mutation and the secret gene-editing program. At Ting's urging, Erica heads to China to expose the program and rescue the infant Ting was forced to leave behind, all while attempting to evade the watchful eye of the Chinese government.

I was getting ready to examine the patient in the next bed, a young girl with unstable diabetes, when I heard a loud commotion.

Ting was yelling, “Call police! Call police!” She had pulled a gun out from I-don’t-know-where and was pointing it at a young Asian man in surgical greens standing by the nursing station, hands raised. The man remained calm, laser-focused on Ting.

Brad ran over to me. “That lady’s nuts. She pulled that gun from behind her back. Must have a holster inside her pants. Can you talk to her? She obviously likes you best.”

My medical education was sorely lacking when it came to handling patient family members with guns. I slowly approached Ting, holding my right arm up, as if it would stop a bullet coming my way. “Ting,” I said softly. “Please put the gun away. Let’s talk about this. You don’t want to hurt anyone, do you?”

Despite her excited state, she held the gun steady, still aimed at the man with raised arms. Ill-equipped to be a hostage negotiator, I turned to Brad and asked him to call the police. “Already done,” he whispered. “Try to stall for time until they get here.”

“There’s probably some mistake,” I said to Ting.

“No one can look as long as you have a gun pointed at him.”

“Someone look. I no shoot.”

The staff looked from one to the other. Finally, Brad spoke. “Okay, I’ll check. But you’d better not shoot me,” he said, looking at Ting.

Brad walked slowly toward the man in question. “Now I’m just going to look at the identification badge.” Brad’s voice was loud and deliberate as he bent forward, his right arm reaching towards the nametag.

With lightning speed, the Asian man reached into his pocket with his left hand and produced a knife with a four-inch blade. Using his right hand, he grabbed Brad’s outstretched arm, twirled him around and bent his arm at the elbow, pulling it up by the wrist behind his back. When the motion had stopped, the blade tip of the knife in the assailant’s left hand was positioned at Brad’s carotid artery. Brad remained silent, straining to look down at the knife near his neck, less than a half inch away from ending his life.

Fiction writer Deven Greene lives in the San Francisco Bay area. Ever since childhood, Deven has been interested in science. After working as a biochemist, she went back to school and became a pathologist. When writing fiction, the author usually incorporates elements of medicine or science. Deven has penned several short stories. Unnatural, Erica Rosen MD Trilogy Book 1 is the first novel the author has published. Her recently completed novel, Unwitting, is the second novel in the trilogy. She is currently completing the third novel of the trilogy, Unforeseen.