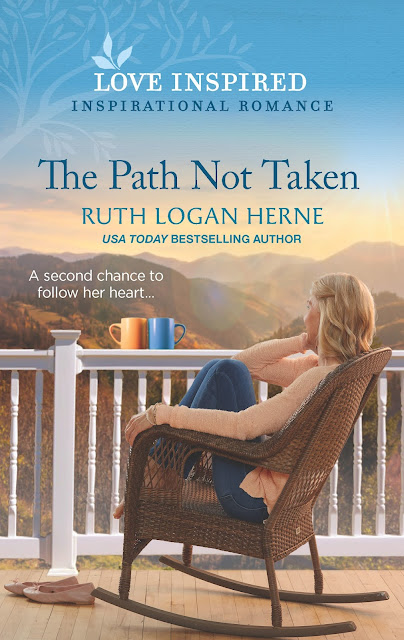 Or tell him they have a son.

Ten years ago, Devlyn McCabe refused to let her secret—their child—be the reason Ryland Bauer stayed. Now Rye’s back to make an offer on her property, and she can’t keep hiding the truth. Rye will do anything to be part of his son’s life. But he’ll have to reveal the real reason he left if he wants them to become a family…

Add Excerpt of The Path Not Taken to your Goodreads!

Buy The Path Not Taken by Ruth Logan Herne

Momma Says: 4 stars⭐⭐⭐⭐
It's a second chance, secret baby romance for The Path Not Taken. Well, Jed isn't exactly a baby anymore, so I suppose it's a secret son or a surprise son - either works for this one. There are lots of emotions flying, and I found myself torn between understanding Devlyn's and Ryland's reasons for their past actions and wanting to shake some sense into both of them. They do have some hard conversations to get through and the themes of faith, forgiveness, and hope that Harlequin's Love Inspired romance is so well known for shines through in these characters and their story. It is a romance, but it's about more than just romantic love. It's a story about family, learning to let go and move forward, and overcoming obstacles.
🞿🞿🞿🞿🞿

He was on his way to a meeting he couldn’t avoid because nestled in the middle of Smoky Mountain Development Corporation’s “over 55” neighborhood concept was a thirteen-acre property owned by Devlyn McCabe. His first love. Maybe his only true love. No one before or since had touched his soul like Devlyn, but that was a long time ago.

He swallowed a sigh, determined to think of something else. Anything else. The land. The project. But there was no separating the project from Devlyn or her land. Her acreage crested the rise of the ridge, giving Kendrick Ridge its vantage point and its name. Her land abutted his and linked his to two other neighbors. Phase One of the project would only go ahead with that middle parcel: Devlyn’s land.

That meant seeing her tomorrow. Rye never took the easy way first. The other property owners were already interested in selling. He knew that.

Dev would be different because his deal came packed with a whole lot of painful history.

He took the turn onto Route 321 and headed for B&B Cabins. A small town like Kendrick Creek didn’t offer hotel and motel lodging, but a smattering of cabin rentals had sprung up over the years. As long as it had a decent bed and Wi-Fi, he was good to go.

He wanted to settle in and plan how he was going to approach Devlyn the next day. One way or another this project would move forward. Hopefully with Devlyn’s land, but if he had to go to Plan B, he would. It wouldn’t be as pretty. Devlyn’s ridge allowed a magnificent view of the mountains east of the valley, and the lower land that bordered the northern edge of Rye’s farmland was thickly forested. The wooded land changed the dynamics of the homesites. Either way, he’d be here for several weeks to put a plan in motion.

He turned into the broad driveway for B&B Cabins and parked outside the manager’s small house, while a cat happily crunched on some kind of treat nearby.

His key was taped to the door in an envelope. “Had an errand. Make yourself at home. Cabin five. We’ll finish stuff up tomorrow. B. Taylor.”

God bless the small-town mentality that trusted he wouldn’t take advantage of the older lady who’d taken his reservation the day before.

He took the key, got back in his car and drove up the curving drive to cabin five. The yard was well lit with dusk-to-dawn lights. The cabin was typical: rustic and simple. A door was centered between two identical windows. Colorful pansies broke up the wood-on-wood of the small porch, wood railings and wooden steps, while different-colored tulips bobbed their heads in narrow rectangular plots in front of the porch.

He opened the cabin door before hauling things in from the trunk of his car. The souped-up sports car had been his reward for his first major financial success years ago. He had just taken it out of storage this week, another sign of the changing seasons.

He grabbed sheets and blankets and carried them inside to the small bedroom. He could honestly say he’d never stayed in a place where he had to provide his own linens before. Clearly there was a first time for everything.

He went back for his laptop case and suitcases as a small car rolled up the driveway. It drove by him and pulled into one of the two parking spots in front of the cabin next door.

He carried a suitcase in, set it down and headed back outside.

He glanced to the right.

And his heart stopped.

Award-winning novelist Ruthy Logan Herne has written over 40 novels and novellas and pinches herself to see if this is real! She lives on a pumpkin farm in Western New York where the long, snowy winters allow Ruthy time to find a quiet spot and write her beautiful, critically acclaimed stories. With over twenty Love Inspired books to her credit, Ruthy loves to connect with her readers on facebook and through her newsletters. Visit ruthloganherne.com or contact at: loganherne@gmail.com