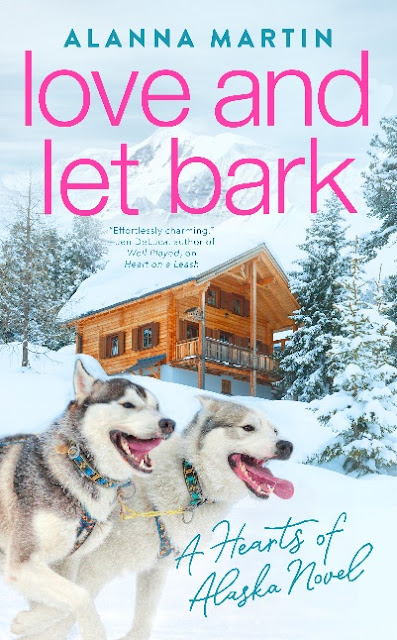 When Nate Porter left Helen, Alaska, to become a firefighter with the Forest Service, he claimed it was because he craved adventure. The truth was, he couldn't stand to hang around, pining for a girl the town's century-old feud meant he could never have. But Nate got over Lydia Lipin years ago, or so he thought, until he learns that an old rival has come sniffing around. The solution—a trip home with his rescue puppies to prove to himself he completely extinguished that old flame.

Lydia Lipin has always been satisfied being the "good" Lipin daughter—dutiful, practical, and always putting others before herself. But that role begins to chafe as Nate's return ignites old memories. No one in town knew about their secret friendship or those forbidden kisses they stole the summer after graduation. Suddenly, Nate and his puppies are everywhere, and sparks are flying.

When Nate realizes he never got over Lydia, he'll risk everything for a second chance. But Lydia's not a risk-taker, and she must make a choice—play it safe and pretend their summer fling was just puppy love or step out of her family's shadow and unleash her heart.

Momma Says: 4 stars⭐⭐⭐⭐
We're back in small-town Helen, Alaska for a second chance romance. I love the charm of this town and these romances, and Nate and Lydia are a great addition to the series. The romance is a terrific mix of sweet, sexy, and funny, and if you're familiar with the series, you'll recognize the feud that plays such a big role in this town. It's such a silly thing, but it adds to the magic of Helen, Alaska - and I don't mean the supernatural kind of magic. Then we have the dogs. We can't forget the lovable rescue huskies, and Nate comes with 2 of them. The romance does, of course, come with a bit of angst, but Alanna Martin tempers it with some well-timed wit and humor, plus some animal cuteness and a setting painted so well you can see it in your mind's eye.

"I've got a guest checking in who says he was a friend of yours, and he asked if you were around?" Shawn sounded uncertain, and he kept his voice low, suggesting whoever this friend was, he might still be hanging around the lobby.

Theresa made a disapproving face. "You're in a meeting. It's not appropriate for the staff to be bothering you if it's not an emergency."

Shawn, who was on speaker, likely heard the comment, and Lydia gritted her teeth. "Did he leave a name?" she asked, ignoring her grandmother. Damn it, this was her hotel now. She'd run it how she liked, and she was meeting with family, not a client or a guest. Which Shawn knew.

Shawn also knew that whenever Theresa Lipin stormed into the hotel, searching for one or the other of her granddaughters, Lydia hung an invisible "Please Disturb" sign on her door.

Shawn lowered his voice further, but some excitement crept in. "It's Cody Miller. Isn't he the Hitched guy?"

Lydia froze for a second as her brain processed this information. Cody Miller, friend, and Hitched were not three things that were meant to go together. Yes, she'd been friends with Cody in school. More than friends at times, actually. And yes, Cody was the guy who'd built Hitched-a travel and ride-share app. But super-wealthy, tech darling Cody and friend Cody had always been two different people in Lydia's mind, even though logically she understood that they were one and the same. Probably it had something to do with the fact that she hadn't seen Cody since before college, and they'd lost touch completely soon after.

So how was it that Cody was in her hotel and asking after her? Cody might be from Helen, but the town was not the sort of location that was likely to draw tech magnates. The only explanation that made sense was that Cody was visiting family, but Lydia could have sworn his family no longer lived here.

Regardless, Cody was here, he was an old friend, and perhaps just as importantly, he was an ideal distraction.

"I'll be right out," Lydia told Shawn, and she ended the call.

Lydia was only mildly surprised that Theresa was familiar with the app. Her grandmother might dislike most technology, but she wasn't precisely a Luddite. She simply preferred face-to-face interactions. It was easier to turn a critical eye on someone that way.

"Yes." Lydia stood, slipping her phone in her back pocket. Most days she tried to dress in a style that Taylor referred to as Alaskan professional, a snarkism that proved you could take the sister out of L.A. but you couldn't take the L.A. entirely out of the sister. But today was a Friday, and Lydia hadn't dressed to impress-jeans and a simple cowl-necked sweater would have to do for meeting a billionaire. After all, tech darlings got away with wearing whatever they wanted, so why not her? Lydia had never seen a magazine or news photo of Cody wearing anything other than jeans.

"Cody is the boy you went to your prom with, isn't he?" her grandmother continued.

That was much more surprising than Theresa knowing what Hitched was. But then, she and Cody had been an on-again, off-again thing for years. "Yes."

Theresa nodded thoughtfully, the savage anti-wedding beast soothed, her invitation forgotten about on Lydia's desk. "He was a nice boy. Smart."

Cody had been smart, no doubt. He'd beaten out Lydia for valedictorian. Yet Lydia assumed her grandmother's praise had more to do with Cody's family being firmly pro-Lipin in the feud.

"Rich now, too, I'm guessing," Theresa said. "Interesting that he came by to see you."

It was interesting, but that was Lydia's cue to make a hasty retreat for the lobby. The next sentence out of her grandmother's mouth would likely involve the state of Lydia's ovaries. Her grandmother had been determined to get Lydia married to the right sort of guy-that was, one of her choosing-for years. While Theresa and the rest of the family might not approve of Taylor's choice of husband, her younger sister getting married had only made the nonsense Lydia had to deal with worse.

Late January was not a typical time for people to visit Helen, although true outdoor recreation enthusiasts were never deterred by the weather or lack of sunlight. As such, the hotel was one-quarter booked, but that didn't mean corners had been cut. Flames crackled happily in the oversize fireplace, casting flickering light over the rustic wood decor, and the air smelled faintly of pine thanks to the scented candles lit at the reception desk. The inn's complimentary homemade cookies and coffee sat out near the glass doors that overlooked the patio. It was almost time for Taylor to bring out the evening wine, which meant Lydia had to shake their grandmother soon. Cody had distracted her, but for how long?

Speaking of Cody, it took Lydia a second to recognize him sitting in one of the armchairs by the fire. For some reason, she'd expected him to be surrounded by an entourage, like a rock star, but he sat by himself, playing with his phone in one hand and holding a peanut butter cookie in the other. He looked totally at home and was dressed to Taylor's exacting Alaskan professional standards-rugged khaki pants, thick sweater, and durable boots. Lydia suspected those clothing items were made by a brand that the average Helen resident couldn't afford, but for the first time, her brain was able to reconcile the two Codys it carried around.

He jumped up as she strode over to him. "Lydia! It's so good to see you." Cody pulled her into a hug that she hadn't been anticipating, and she had to course correct before smacking her nose into his shoulder.

Well, that was unexpected, but they had been close during school. Lydia decided to shrug it off and follow his lead. "It's good to see you too."

Cody beamed at her, holding her hands while he assessed her. "You look fantastic. Haven't changed a bit."

Growing up, Alanna Martin wanted to be an astronaut, a doctor, and an actor--possibly all at once. After nine years of studying psychology, she somehow became a writer instead. This turned out to be the best career choice of all because she can work in her pajamas while drinking wine. She firmly believes in the power of fluffy books, long walks in the woods, and that there's no such thing as too much coffee.