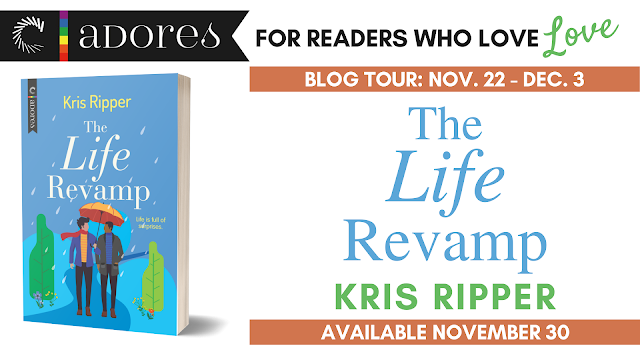 The Life Revamp by Kris Ripper is available in trade paperback and eBook on November 30th! 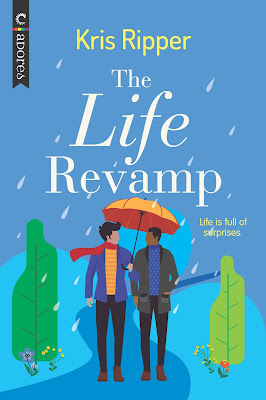 All Mason wants to do is fall in love, get married and live happily ever after.

The hunt is beginning to wear him down…until he meets (slightly) famous fashion designer Diego. Everything sparks between them—the banter, the sex, the fiery eye contact across a crowded room.

There's just one thing: Diego is already married and living his happily-ever-after, which luckily (or not) for Mason includes outside courtships.

But not quite in the way he'd always imagined.

Mason thought he knew what would make him happy, but it turns out the traditional life he'd expected has some surprises in store.

Add The Life Revamp to your Goodreads!

Momma Says: 4 stars⭐⭐⭐⭐
Another fun romance in The Love Study series. This time, we get a polyamorous relationship. Diego and Claris are happily in an open marriage, and Diego and Mason falling in love is the focus of this story. I liked the characters, but Diego is my favorite. He's a terrific character who's so easy to like with his charm and wit. Mason's discomfort as he figures out his place in the relationship felt authentic. I think Kris Ripper handled the poly relationship well. I wish there had been more of Claris and Mason at least discussing how everything would work, but other than that, I liked the way it was done. I've read all three books in this series, and I've enjoyed them all, but I think this is my favorite. It was just so much fun to read. 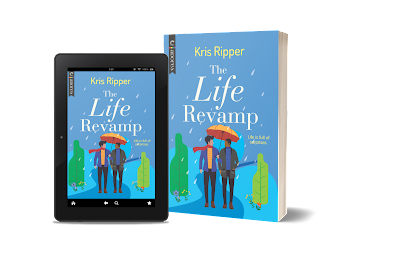 “This is cozy,” Claris said, stepping up beside Diego.

I suddenly realized we were basically two grown men playing make-believe and felt myself flush.

But Diego, without changing his tone, said, “I’ve had to bring Mason in on the secret nature of my intelligence work, but you did say he was trustworthy.”

“Ah. Yes. Your…intelligence work.” She nodded. “I am comfortable vouching for Mason in this capacity.”

“You don’t believe he’ll be a liability to my work investigating art and its use by spies to buy and sell vital intelligence data?”

She bit her lip as if trying to control a rogue smile. “Oh, no, in fact I think Mason could be an, er, asset. To your important work. He’s very observant.” She winked at me. “I’ll leave you two gentlemen to it. I have some contacts of my own to develop.” And away she whisked.

I let out a breath I didn’t realize I’d been holding.

“Sure. I just had a meta moment of thinking that playing pretend wasn’t exactly normal behavior for a blind date.”

Diego reached for my hand, clasping it between both of his. “Mason. If you can’t play pretend with your date, then why are you dating them?”

The question, teasing as it was, knocked me back a moment. I would never have talked like this with Tim. It wasn’t that he didn’t have a sense of humor, just that he wouldn’t have understood art gallery as an appropriate venue for pretending to be spies. I didn’t allow myself to be bothered by the fact that I couldn’t think of any venue Tim would find appropriate for playing spies.

I brought myself back to the moment. “According to my friends I’m usually fixing them more than dating them, so maybe that’s your answer.”

“Oh no, that’s not good. Fixing never works out well in the long run, though I suppose it does form the basis of a lot of marriages. Let’s go find some other possible security exploits.” And then, as natural as anything, we were holding hands. Walking through the gallery, looking at the next display, fingers loosely intertwined.

It didn’t last long. Maybe two minutes. Four or five at the most. But since most of the people I’d dated expected me to initiate all the contact, it stood out to me as A Thing. Not forced, not entirely casual.

Since we weren’t on a serious date, I wasn’t exactly running my usual program of balancing my outgoing appearance with an internal checklist of ways Diego did and didn’t meet up with the kind of person I saw myself with. Still, without The Usual First Date Questions, we ended up just…talking. A little about our jobs, but since Claris had told him that I worked in marketing and sales at the bank, and she’d told me that he designed clothes, we were robbed of/saved from the general chitchat.

And honestly? It was fun. If I didn’t have a well-established friend group already, or if we’d been younger when we met, Claris and I would have probably had a non-work friendship from the beginning. But something about being in our thirties made that kind of thing more complicated than it used to be, so it had never exactly shaken out until now, and if this semi-sham of a blind date was the thing that made it happen, I wasn’t complaining.

It might have been easier if I liked them just a little bit less. They were obviously so into each other, so delightful together, so damn #relationshipgoals. It was almost intimidating to watch, except each time I started feeling slightly alienated, one or the other of them would find a way to pull me in again. And Diego didn’t take my hand after the first time, but he did find other ways to touch me, brush against me, stand close beside me to study the crooked beak on a painted parrot and quietly debate whether the hooked end of it might in fact be a disguised arrow, and if so, was it pointing to the location of a hidden microchip lower in the painting?

I left them outside the gallery at the end of the night, exchanging cheek kisses. Claris teased Diego about how she’d really just set us up to encourage him to finally separate his business and personal finances, adding to me that creatives were notoriously bad at doing so. Diego promised to come by the bank where I worked to set up a business account. Claris promised he would have all the necessary information to do so, with the kind of sidelong couple-look that should have made me feel excluded, and would have, except she followed it by saying, “We don’t want Mason thinking you keep poor records, darling, so we’ll try to hide that from him as long as possible.”

“I don’t keep poor records,” he told me in his defense. “I just don’t keep a picture of every single receipt in a database cross-referenced by purchase, company, tax year—”

He groaned. “Oh no, not another one.”

I sent my post-date recap to Dec, as usual. This time it took me longer than ten seconds to figure out how to summarize. NGL, I really liked him. Too bad he’s super married and I’m sorta taken. True statements. I added, Also we pretended to be conducting a counter-espionage investigation. So FYI, you’re covered if you need any help with that.

He sent back a toothy emoji—the happy one, not the eek one—and That sounds amazeballs. You liked him?

Me: Yeah. Like I said. But I’m in the market for a serious boo and he’s already got one.

Declan: I’m just glad you liked him! At least it sounds like you had way more fun than you usually do!

Me: I’ve definitely never gone out on a date and had my date’s wife along for the ride before. Look at me, trying new things. :P

He replied with an entire rainbow of hearts. I sent the same back and put my phone away, trying not to take it too personally that Dec didn’t think I sounded happy after dates with the guy I was actually dating. I couldn’t worry about that, not tonight, not while I was still thinking of things Diego had said and smiling. And the way he’d held my hand, just for a minute or two, the warmth of his palm in mine.

I’d been right, by the way. He had a great laugh.