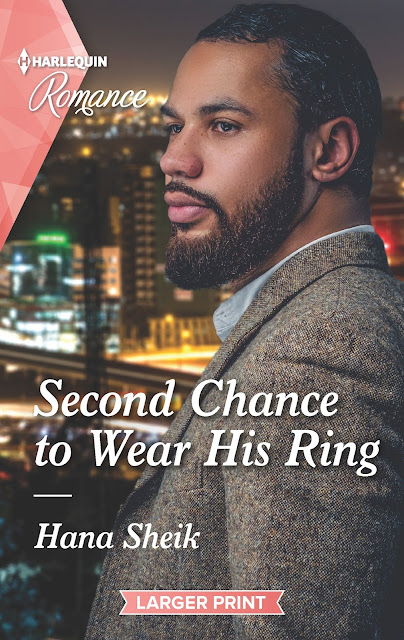 A forgotten past…
Could pave the way to forever!

When millionaire Mansur Ali is called urgently home to Somaliland, he’s shocked to find that the woman who broke his heart needs his help. After an accident, Amal has lost many memories…including Manny’s marriage proposal and her rejection! Manny will help her seek treatment in Addis Ababa, but he’s resolved to keep his heart firmly off-limits. A promise that is tested when their journey brings them closer than ever before…a whole lot more?

Add Second Chance to Wear His Ring to your Goodreads!

Buy Second Chance to Wear His Ring by Hana Sheik

Momma Says: 4 stars⭐⭐⭐⭐
It's a second chance romance with an amnesia trope for Hana Sheik's Harlequin debut, and all I can say is this author has certainly set the bar high for whatever comes next. Amal and Manny are terrific characters and I found myself rooting for them almost immediately. I also really liked the way the amnesia storyline was handled here. Plus I got to do a little traveling from the comfort of my recliner thanks to the author's wonderfully descriptive writing. She managed to paint a picture with her words that made everything so easy to see in my mind's eye, and she did it without going overboard or making it feel like filler. So, great characters, rich settings, engaging storyline - all of that combines for an entertaining weekend read.
🞿🞿🞿🞿🞿

Facing the door, his mother had noticed his entry and now called to him, her eyes as large and disbelieving as the young maid’s. The sound of the truck’s running motor grumbled in with the cool breeze. The door to the veranda was open, as were all the windows in the tastefully furnished living area.

She shouldn’t look surprised. She had known he was coming. Manny had left a message for her before he’d boarded his private jet. He’d figured she must have heard it as she’d sent the driver to fetch him.

Then again, she was likely shocked that he had shown up. She hadn’t expected him to heed her summons. And what did that say about him?

That you’re a failure of a son, maybe?

He scowled at the thought and fixed his attention on the scene before him.

His mother stood with the help of a woman who had her back to Manny. He assumed it was another maid. That was the wrong assumption.

“Amal…” Manny breathed her name. It felt too long since he’d allowed himself to think about her. A whole year, to be exact.

If he’d known they would cross paths so quickly he would’ve arranged for his mother to meet him elsewhere. Perhaps in his old bedroom. She’d likely furnished it for him, in the hope that he would opt to stay with her rather than check himself into a hotel.

But it was difficult to think about his accommodation when his mother was approaching him with Amal.

He flinched as they neared, his instinct roaring at him to flee. His heart, a battering ram, drummed so loud he feared that Amal would hear it. That she would know how easily she continued to affect him.

Curiosity kept him rooted. But he was seconds from storming out of the house to spend his first day here in a hotel.

Only the flash of emotional pain in his mother’s wet eyes cooled his indignation. Halima Ahmed Adan didn’t shed tears lightly. Only two instances came to his mind before this: when his father had died last year and when Mansur had announced his plan to leave for America on a college scholarship at the impressionable age of seventeen.

But she was crying now, her shawl forgotten where she’d left it on the ornately patterned floor cushions.

“Hooyo,” she said, and the Somali term of endearment wrapped itself around his heart. It meant mother, and by choice he hadn’t had one this past year, for reasons he was still ashamed to contemplate.

Moved by her tears, Manny stepped into her open arms and sank into her embrace.

She pressed her mouth to his ear. “I missed you.”

“I missed you, too,” Manny murmured.

Over his mother’s shoulder, he met Amal’s eyes. Her face free of makeup, her tawny, reddish-brown skin glowed as if freshly scrubbed. She wore a neutral expression. Her midnight-blue silk veil was styled to match her dress. Snug around her chest and curvy hips, its flowing design was meant to discourage the kind of heated thoughts slipping into Manny’s head unbidden.

Squeezing his mother tighter, Manny eased his hold when she gasped and gave a small laugh. He’d almost forgotten he was hugging her.

When his hands dropped to his sides again he flexed his fingers, the lingering feel of her warming his gut and falling over him like a comfort blanket. It was easier to hold on to the grudging anger.

Noting where his attention was directed, his mother grasped Amal’s hand and pulled her closer. “Have you forgotten Amal?” she asked.

Hana Sheik falls in love every day reading her favourite romances and writing her own happy-ever-afters. She's worked as a data entry operator, customer service rep, telemarketer, and ghostwriter—but being a romance author is without a doubt the best job ever! Born in Somalia, she moved to the beautiful capital of Canada as a toddler, and still lives there happily with her family.