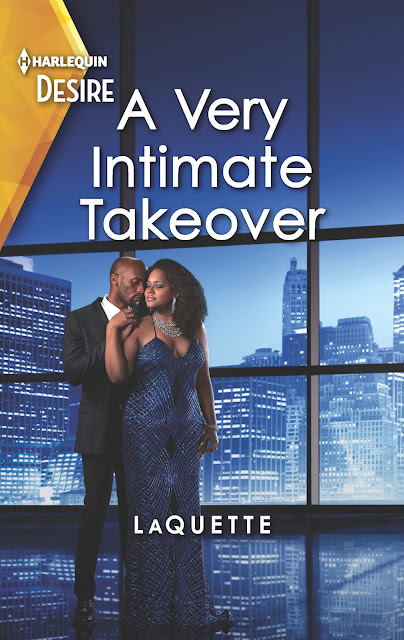 Falling for the enemy never felt this good in the debut novel of LaQuette's Devereaux Inc. series.

but vulnerable in his arms.

Trey Devereaux is out to prove her corporate mettle to her skeptical father. When she sees a chance to take control of Devereaux Inc. from her estranged grandfather, she pounces. But Jeremiah Benton, his second-in-command, is fiercely protective of the Devereaux patriarch…and absolutely enticing. The intensity of their attraction overwhelms her defenses, and Trey even finds herself warming to her grandfather under Jeremiah’s influence. Can Trey maintain her resolve—or is Jeremiah winning this high-stakes merger? The fate of a billion-dollar Brooklyn legacy lies in the balance…

Add A Very Intimate Takeover to your Goodreads!

Momma Says: 4 stars⭐⭐⭐⭐
A Very Intimate Takeover is such a great title for this book, but it's also a little bit deceiving. From the title and cover, which is also fabulous, I would've expected a sexy romance with chemistry and heat, but this is so much more than that. This first in the Devereaux Inc. series is a romance, but it's also a story about family and all the messy emotion that goes with it. Then it's a story about business and getting even for past wrongs, but you know what they say about the best laid plans. This is one of those books that once started, you may as well plan on finishing because you aren't putting it down willingly. At least I didn't. Now, I just have to hang in there and wait for book 2 because I really want more of these characters and this family, messy as they are.
🞿🞿🞿🞿🞿

The envelope was smooth yet had enough texture that she took her time sliding her finger across it. The deep sandalwood beige, trimmed in a dark mahogany and gold foil, had enough flare to let you know the sender cared about making a good impression, but not so much that it was gaudy.

She opened the envelope and pulled out the folded paper carefully. She was curious to see what this J. Benton had to say.

Please forgive my forwardness in sending you a physical letter. However, I needed to confirm delivery of this message while ensuring our communication remained private. What I have to say is too important to risk getting lost in your spam folder or intercepted by prying eyes. The elder Mr. Devereaux has forbidden me to share this with you, but I felt that as his son, you needed to know. I regret to inform you that Ace has fallen ill. Ill enough that his physicians have determined he may have less than six months of life remaining. I know I am a stranger, and this is a personal topic, but your father and his business need you now as his next of kin. If left to his sister, Martha Devereaux-Smith, Devereaux Incorporated will suffer. You are the only person who can stop her. Please don’t delay. For your father, and his legacy, I beg you to return to Devereaux Manor immediately.

Trey rose in one quick movement, heading for her father’s office. When she arrived, she immediately paused. The grandfather she’d seen nowhere but on television and in business magazines was dying. She tried to process what this new knowledge made her feel, and all she could identify was numbness. But her father, having spent the first twenty-two years of his life at his father’s side, might feel something more than the nothingness that spread through her veins.

The door was slightly ajar. She was about to knock when she heard her parents’ voices.

“Destiny, she’s too quick to act. I’ve told her she couldn’t rely solely on her usual tactics, and she ignored everything I said and did it her way instead. Now, she can’t make this right.” Her father’s words cut deep, like a heated blade. He was still angry with her, his focus so fused to her failure, he couldn’t see her ability to get this job done.

“Deuce, practically from the moment we found out I was carrying Trey, you have demanded greatness from her. You used to place your head on my belly every night when she would kick me so hard I couldn’t sleep and say the same thing over and over until she calmed down. ‘Trey, you are Deuce Devereaux’s daughter, and there isn’t a man or woman that can stand against you.’ You believed that then, and in all this time she’s never given you reason to doubt her.”

“This is different, Des. This was her test, to prove to me she could handle everything I’m leaving to her. Now, after this disaster, I can’t retire. I can’t leave DD Enterprises until I know she’s ready. I’m so tired, baby.” The hitch in his voice yanked at Trey’s heart. His lack of faith in her might have raised her blood pressure, but hearing him this way, so fragile, so hopeless, felt like something crushing her from the inside out. “I’ve been fighting this fight with Ace for over thirty years. It’s taken so much away from my life with you. I’d thought I could retire early and leave it all to her, but now…”

An activist for DEIA in the romance industry, LaQuette writes bold stories featuring multicultural characters. Her writing style brings intellect to the drama. She crafts emotionally epic tales that are deeply pigmented by reality's paintbrush.

This Brooklyn native's novels are a unique mix of savvy, sarcastic, brazen, & unapologetically sexy characters who are confident in their right to appear on the page. Find her at LaQuette.com & at LaQuette@LaQuette.com.