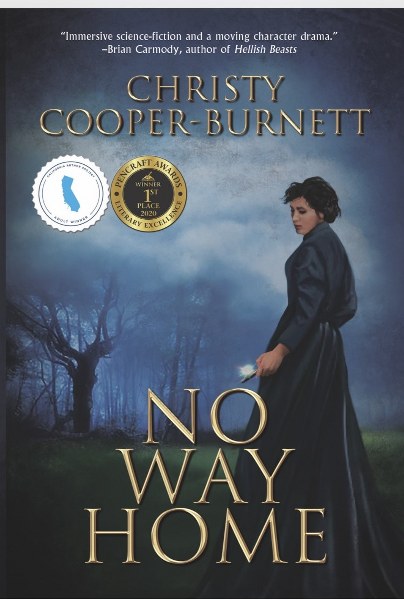 "An action-packed time-travel adventure that will leave you thirsting for the sequel." –Sublime Book Review

"A brilliant and thought-provoking book that readers who love tales of time travel will find fascinating." –Authors Reading

Christine Stewart is a regular woman just doing her job when she gets stranded in history. When she gets up for the day, her plan is simple: go to work, travel back in time to the year 1867 in Oklahoma to deport a cyber-criminal, then head back to her time in 2070 Los Angeles and get ready to go on vacation with her son, Michael.

Then the system goes down and she-and dozens of other transporters around the world-are stranded in the past with minimal training and no supplies.

Just when she thinks things can't get any more dangerous, she is cast further back in time and thousands of miles away.

As her goals shift from simply getting home to something much more dire to all of humanity, Christine must step outside of herself, work as part of a team, and ultimately make the choice between what it easy and what is right. Even if it costs her everything-including her one chance of ever getting home.

I feel the panic inside me rising. Unable to control the fear, I snap at Marcus, “Shut up, I need to figure out what’s wrong!” He stares but offers no reaction, which isn’t surprising. Why should he care? He has no choice— he’ll be staying here. I, on the other hand, should have left by now. I try the transponder a few more times with no luck. It shows no signs of life.

Oh my God, this can’t be happening.

I’m stranded two hundred years in the past with no weapon, no supplies, and a prisoner who’s more likely to abandon me than offer any help.

My breathing is uneven, my heart pounding. I don’t know what to do; there’s no protocol in place for equipment failure. It’s always been a given I’d get back to my present day; I’ve transported prisoners many times in the last ten years with no problem. And I’m a good transporter, I keep my emotions out of the job. Yet here I am, a forty-year-old woman from 2070 Los Angeles in the middle of nowhere in 1867 with a twenty-three-year-old cyber-criminal who thinks of me as the enemy.

And not one idea about how to get home.

I can’t count on my prisoner to be much help. I spent the last day prepping him for his exile here, and I wouldn’t describe him as resourceful.

I pace back and forth for a few minutes trying to calm down, when Marcus announces that he is leaving. I’m not sure if I’d be better off with him here or if I should be relieved he is going, providing one less complication to worry about. I eye the backpack slung over his shoulder. I remember every item in there—I inspected the contents earlier today. He sees me looking at him and stands up straighter, grabbing the shoulder straps of the pack firmly.

I raise my eyebrows and tilt my head. “Please, at least a bottle of water?”

“No way.” Backing away and smiling, he laughs and gives me a weak salute before jogging toward town.

What a little shit he turned out to be. 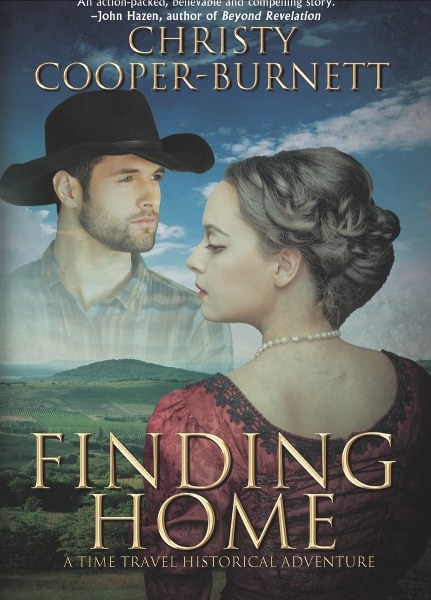 An exiled prisoner. A desperate woman. A time travel agent willing to break the rules.

Malcolm Aldred is starting over in 1868, Oklahoma. There’s just one problem—he’s an exiled prisoner from 2070.

In 2071, Los Angeles, housewife Hannah Cole is desperate to escape her abusive husband, and begs Cyber Criminal Enforcement Agent Christine Stewart to send her somewhere, anywhere, in history. When Christine agrees to send Hannah to 1868, neither woman has any idea the events that sets in motion.

Malcolm and Hannah adapt to pioneer life in an untamed world full of danger and unimaginable hardships, but falling for each other was never part of the plan. When a deadly hunter tracks Hannah to 1868, fate intervenes and catapults her back to Colonial America, threatening to destroy their future before it ever begins.

Can Christine save Hannah in time or will they both be lost to history forever? 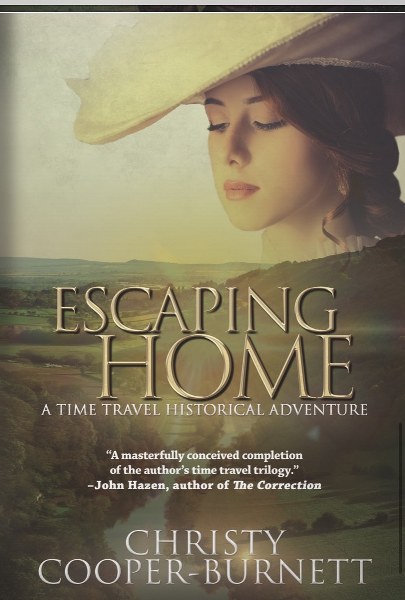 With the country under the threat of war, a group of time-traveling government agents devise a risky plan to keep their families safe. But transporting hundreds of years to the past and blending in may prove much more dangerous than they expected.

Cyber Criminal Enforcement Agent Christine Stewart has been to the past before and thinks she knows what to expect. She couldn’t be more wrong.

Life in the eighteenth century is anything but ideal, especially when they learn a rogue agent with plans to strike it rich follows them back in time. Armed with a modern-day weapon, the agent may disrupt the timeline in the most disastrous way and alter history as they know it.

Now they’re refugees in their own homeland, and how they proceed will determine their fate. Will they crash and burn in their race to stop the defector before it’s too late?

I was the first to wake up in 1790. Our group stretched out across the clearing, a hodgepodge of tangled limbs and scattered rucksacks. It was not a pretty picture. We looked exactly like what we were—a band of interlopers who landed here haphazardly and collapsed from exhaustion.

Gray and Adams stirred and sat up within minutes of each other, as did Ethan. We said nothing, just stared at one another wearily. Ethan rose to give me a quick embrace and collected the packs, stacking them in a pile. I got up to help, as Gray and Adams shook the others to wake them. I preferred to let them sleep. I didn’t look forward to their reaction to being here. Linda was petrified and glanced around the clearing. Frank pulled her close, while she buried her face in his shoulder. He spoke to her softly, soothing her.

Adams searched for his pack, making security of the medical provisions his top priority. Our antibiotics were this era’s entire stock of them as of this moment, and that was an unsettling thought. He was intent on protecting them at all costs.

Adams’s wife, Gemma, stirred while he was securing the supplies, and I glanced over to see her sit up with a start. She was dangerously close to hyperventilating. She twisted around frantically, searching for their son, Wyatt, who was still out cold. Her chest heaved as she dragged in air between sobs.

I took a deep breath and moved in that direction so I could calm her before she escalated into a full-blown meltdown. I grabbed her shoulders and pushed her head down between her knees and instructed her to inhale slow, steady breaths. My movement caught Adams’s attention, and I motioned him over to help her.

Gray’s wife Kira and their two daughters, Rose and Emory, fought their way back into consciousness. The teenagers cried as their parents soothed them, their earlier excitement over transporting long gone. I felt bad about the bet I made with myself when they were giggling in the jump room, because now they were scared to death.

The commotion woke the rest of the group, and the more experienced agents were calming the civilians. Annabelle’s girls sobbed when they saw others in our group crying. Their cries morphed into high-pitched wails within seconds, and before I could stop it, everything spun out of control. It seemed our immediate future would be more about regret management and not goal achievement, as I had hoped.

Thirty minutes later, we had the group calmed enough to speak to them. Frank stepped up and held his hands up to quiet everyone.

“We have makeshift canvas tents to set up as shelters for the next couple of days. After that, if we want to stay in town at an inn until we build the cabins, we can. But for now, we need to remain here while we acclimate and wrap our heads around where and when we are.”

Ethan joined Frank and continued. “The day after tomorrow, a few of us will go into Alexandria and see about purchasing land and supplies. The sooner we get started, the better. We want to settle in before winter hits. I think me, Gray, Adams, and Christine should go to the city. That leaves Joe, Frank, Annabelle and Michael here at camp to watch things and get us organized.”

No one objected, the civilians were happy to let us take the lead and make the decisions. I took a deep breath and made rounds, ensuring they were calm. The older kids babysat Annabelle’s toddlers as the adults set up the shelters.

An hour later the tents were pitched, and we were ready to organize camp. I caught Michael’s eye, and he smiled. He seemed to take this in stride, but a surge of guilt ran through me anyway. It was the right decision to come here, but I could not help but feel apprehensive that I talked my son into going two hundred eighty-two years to the past to call home. 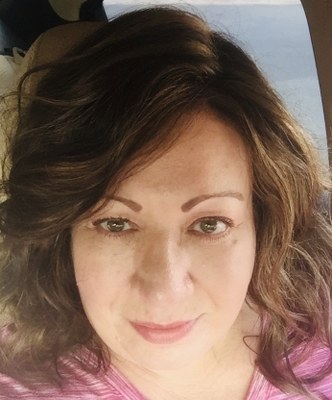 Christy Cooper-Burnett is an award-winning author based in California with a degree in Administration of Justice. After retiring early from the new home construction industry, she now divides her time between northern and southern California.

She has one grown son who inspired her to write her award-winning debut novel, No Way Home. She began her writing career later in life, but once she started she couldn't stop. Her work focuses on creating relatable stories and characters that transcend genres and encourage readers to imagine what they would do if thrown into the unique, imaginative situations her protagonists end up in.

Christy's debut novel, No Way Home, was the recipient of the 2020 California Author Project award in the Adult Fiction category, the 2020 PenCraft Award in the Science Fiction category, a 2021 Literary Titan Gold Medal Award and a finalist position in the 2021 International Book Awards, Science Fiction category. Her second novel, Finding Home released June 17, 2021, and early praise has already garnered several five-star reviews and her second Literary Titan Gold Medal Award. The third book in the Christine Stewart Time Travel Adventure series, Escaping Home, is an Indies Today recommended read and is set to launch on November 18, 2021.