Take You There New Release Blitz

Title: Take You There

Thoughtful, quiet, and just a wee bit on the dryly sarcastic side, Ethan teaches music at the university in Second Chance. With barely enough time to breathe between hysterical students and faculty shenanigans, he’s not looking for Mr. Right -- just Mr. Right Now -- and only when the moment calls for it. The beautiful man who calls himself “Blue” in a quick, dirty alley encounter should have satisfied him. But now Ethan can’t get Blue out of his mind, and can’t seem to stop looking for him.

Carter --”Blue” when he wants to stay anonymous -- wears his scars on the inside, but they’re deep and still bleeding. He doesn’t venture far outside his antique & pawn shop unless he’s desperate for someone to touch and hold him and make him feel good for a little while. He promised himself he would never want more again. The smoldering musician who caught his eye, and what they did in the alley, should have been enough. That should have been the end of it.

It wasn’t. It isn’t. Their encounter left him pregnant, and he’s been frozen since then, not knowing how to break free of his shell or what he should do. Until Ethan finds him -- and then, everything changes. Again.

Was there a place like this in Second Chance?

Of course there was. Carter’s lips curved wryly around the rim of the highball glass he held to his lips. There was always a place like this no matter where you went. It just depended on whether who you asked knew what you wanted. And if you wanted a bar that didn’t serve chicken wings but did pour good beer and better tequila and top-shelf vodka, you wanted the bar called Speakeasy, just off Main Street. You could only get in through the back door and only if you knew where and how to knock, but once you did…

It wasn’t a place where everyone knew your name, but for most people there, that wasn’t even close to the point and sometimes --

Carter kept to himself when he could, lived silently and solitary, and he’d chosen that kind of life on purpose. It was better that way. Safer. He could watch his twelve and his six, and he could walk away from anything before it overwhelmed him. But sometimes --

Sometimes, he needed this.

Tucked quietly and carefully in one corner of the room, he kept the rim of a glass of tequila at his mouth, but only for show; he’d already sipped his way through two shots. Enough to work the tension out of his knotted muscles, but not so much that he’d do something he’d regret in the morning. Or if he did, to know it’d been worth it.

Carter’s hand spasmed around his glass, remembering it all too keenly, and knew he’d keep remembering until --

He should have turned the radio at his antique-slash-junk shop workbench off as soon as the first broadcast about the quarry disaster came through, but it’d caught him before he could switch the app off and he’d been lost. Drowning in it. He’d spent the day ignoring a workbench full of things that needed repairing, fixated on the steady voice of the broadcaster droning on and on and on with the lists of missing, injured, dead. On and on and on. Heartbreak after heartbreak after heartbreak, and he’d felt them all. Even now he could feel the echoes in his chest, cracking with each one --

Carter rubbed the heel of his palm against his eyes. He’d always been like that, ever since he was a kid. Too sensitive, even if he’s probably going to be an Omega, they’d said. Strange, even for someone with -- you know -- his kind of bloodline, and everyone knows how they are.

He’d taken that to heart too. He’d learned how to turn himself off -- but too well. Even if he hadn’t intended it, he’d gone too far in the other direction. Unless he was as careful as careful could be and didn’t slip up as he had with the radio, it took him so long to warm up to people and let them in that it turned them off, made them look at him oddly and give him a wide berth.

What’d happened today at the quarry wasn’t about him. Carter knew that.

But if he ever wanted to sleep again, he needed this.

Carter tilted his head back and gulped, letting the whole shot burn its way down his throat. He came up breathless, but -- better. Much better, even if it left him gasping and with his heart pounding. He lightly thumped the heel of his shoe on wooden floorboards worn smooth from years of others doing the same. The owner, who set the playlists every night, had a sense of occasion. No wailing jazz or mournful blues tonight. Just hard, driving beats that made a man want to shout, stomp his boots, pump his fists to the sky.

To erase everything except feeling good for a little while. To fuck.

Fuck, no playing around, no sugarcoating it. A soundtrack like this demanded hard kisses and hands on harder bodies from anyone who was willing, who was able, and who was old enough to know better but still didn’t give a damn.

Carter ran a finger around the rim of his glass as he searched the room and sorted through his options. The locals all knew him here. He had to do his hunting among the new-to-town men, but there were plenty. Firemen and rescue crews who’d done their jobs and been turned loose to celebrate, for one. Graduate students, a whole crop of them.

A few who weren’t nearly so easy to pin down. Those were the ones he wanted. Carter wanted that, to chase after the distraction they provided.

Or to be chased, instead. That was new.

Carter could feel one of them watching him. Staring at him. He wasn’t sure how long the man had been looking. He might have started while Carter emptied his glass and had his throat on display; that would have piqued any Alpha’s interest. Slowly, slowly, he swept the room, searching.

There. Someone he’d never seen before. An Alpha in a dark green shirt, well-worn jeans that hugged his ass, and scuffed leather boots. Long hair pulled up in a messy knot -- to hell with fashion for this guy, he clearly liked what he liked and he liked his man-bun -- and a feral grin. Lean as a lone wolf in early spring but lined with lean muscle and blessed with a sense of rhythm. He’d probably had just as many drinks as Carter, or more, but he could still keep up with the beat, swinging his hips and raising his hands to the roof.

When Carter met his hot, interested stare, the Alpha raised an eyebrow in both dare and invitation. 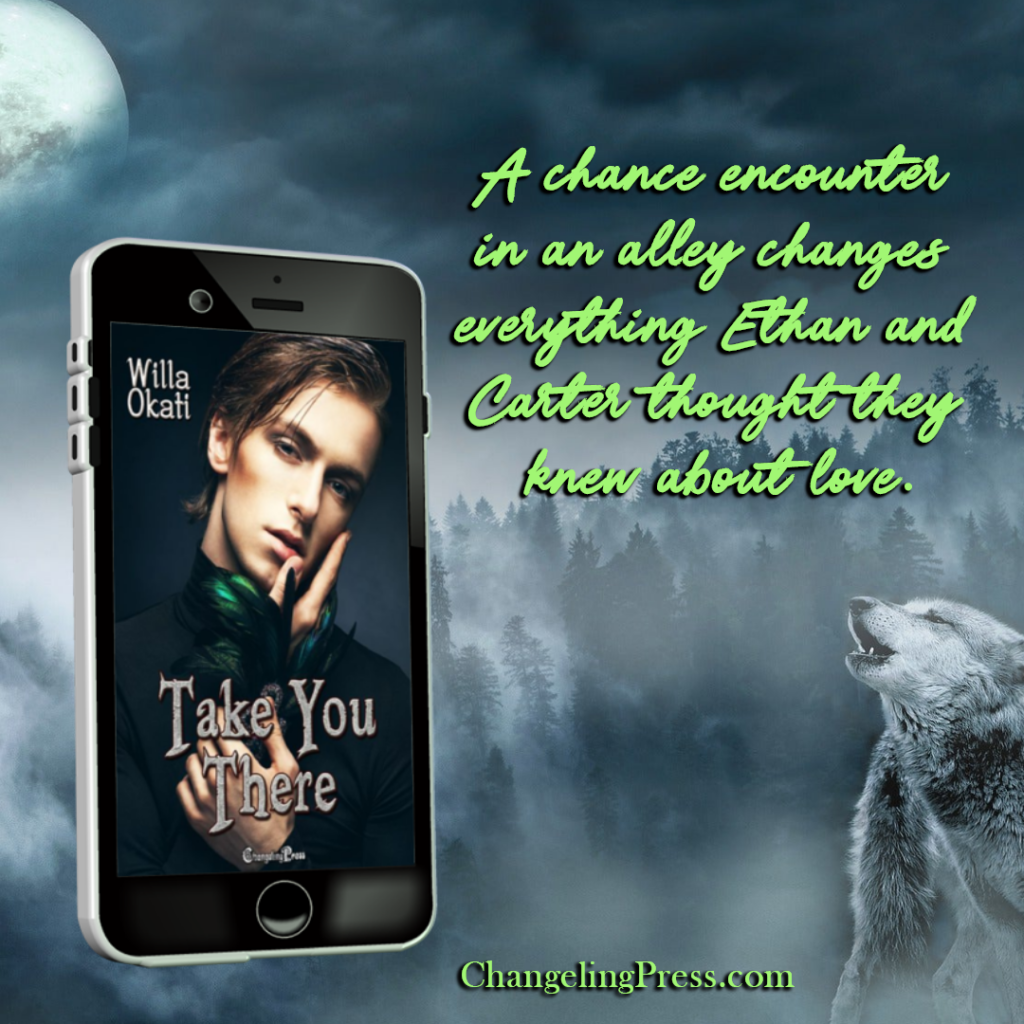 Willa Okati (AKA Will) is made of many things: imagination, coffee, stray cat hairs, daydreams, more coffee, kitchen experimentation, a passion for winter weather, a little more coffee, a whole lot of flowering plants and a lifelong love of storytelling. Will's definitely one of the quiet ones you have to watch out for, though he -- not she anymore -- is a lot less quiet these days.

One lucky winner will receive a $10.00 Changeling Press Gift Code!