The Eagle's Lady Tour and Giveaway 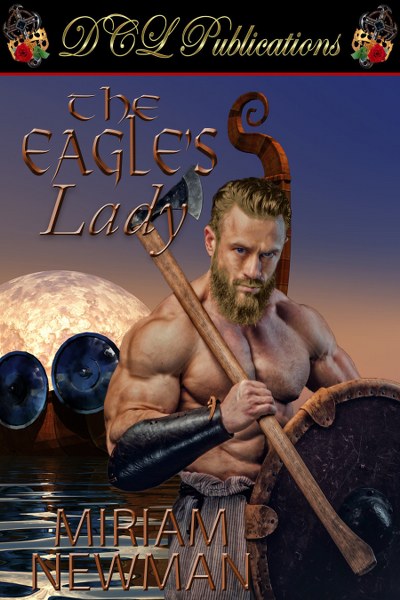 Son of an impoverished, dying chieftain, Ari raided for booty and slaves so he could feed his people. He was a heathen, probably a murderer, and it was a sin to lie with him.

Ari closed and bolted the door behind them as he usually did when they slept, but Maeve knew they would not be sleeping in the broad light of day, such as it ever was in the longhouse. By the light of the lamp, she watched him draw a square white cloth and a rare, expensive silk pouch from the cubbyhole where he kept clothes. It reminded her of the sunstone he had used on the ship, but she knew this was something entirely different.

Ari looked distant, hardly aware of her. Unfolding the cloth before the hearth, he laid it in a square, then shook the contents of the pouch gingerly onto it. A handful of fired clay tablets tumbled out with a tiny clinking noise. They bore markings that reminded her of chicken legs—scratchy, scrawling marks nothing like the figures Brother Ambrose had shown her on a manuscript.

The tablets that fell face down he ignored. From the others, he selected three, leaving others scattered randomly below them.

“This I cannot well explain to you,” he said, finally acknowledging her silent presence. “My father was many years teaching me to read the runes.” He frowned at the tablets. “These three show the past, the present and the future, but incompletely. The others help to show the wyrd—the path.”

He smiled, a little grimly. “My fate, perhaps. Only the Norns can say.”

Hailing from Pennsylvania, Miriam Newman has developed a prolific writing career that began in her twenties, although she published her very first novel some time later in 2009. She was published in poetry before catching the romance writing bug. Fantasy poetry driven by myths and legends has been her passion for as long as she can remember and she brings that background to her writing, along with a lifelong addiction to horses, an 18 year career in various areas of psychiatric social services, and many trips to Ireland, where she nurtures her muse. Her published works range from contemporary fantasy romance to fantasy historical, futuristic, science fiction and historical romance. It was in Ireland that she wrote The King’s Daughter. Ireland is her favorite place in this world. “I connect there with something I can’t even explain,” she says fondly.

Miriam spent many years working in Social Services, and after retirement, she found herself working part-time in local government. Currently, she lives in rural Pennsylvania with a “motley crew” of rescue animals. Her passion for animal rescue and fostering has included a number of fur babies, from horses to dogs to a pig that appeared on her porch one morning. Also a lover of great books, the one that she finds most responsible for her venture into fantasy and recommends is The Once and Future King by T.H. White.