The Christmas Unicorn Tour and Giveaway 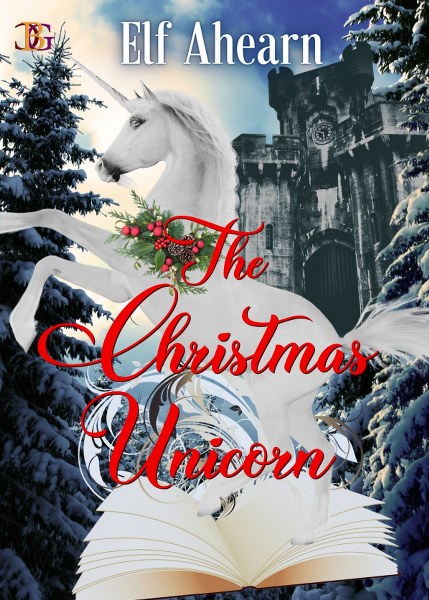 The greatest gifts aren’t always under the Christmas tree.

Believing herself abandoned by her fiancé in the wilds of Northern Wales, actress Babbie Crispen and her wheelchair-bound son struggle to find shelter on a frigid night before Christmas.

A strange man the locals call the Wicked Scot finds them near death on a snow-covered hillside. He brings them to his castle, a place of both terrifying and wonderful magic so powerful it changes all their lives.

“It’s a lot to ask,” Franny said, “but will you let us stay? My father is a very rich man with a whole house in London. He’ll pay what we owe, but the mail being what it is…”

The woman patted his shoulder. “It’s a pleasure to see a young one lookin’ out for his ma. I’ll talk to Mr. Gaenor and see what we can do.”

Babbie choked down a bite of stew as she waited for the innkeeper’s wife to get out of earshot. “Don’t lie, Franny. Lies track you down and—”

“Where are you expecting us to go this late in the freezing weather?” Not for a moment did her boy appear contrite.

Shouting and crashing from the kitchen interrupted her lecture. The Gaenors were in full fury. Their curses erupted in Welsh so thick, Babbie, who knew something of the language, couldn’t catch a word of it.

“Eat Mama. The missus may lose this battle.” Franny shoved his bowl close. “And have some of mine.”

As he was about to spoon stew onto her dish, she caught his arm. “I’ll have your hide if I catch you dieting for my sake, young man. You’re too thin as it is. Eat.”

Quickly, she wrapped the bread and cheese in a handkerchief and jammed the package into her reticule. She loaded her spoon with stew and chased whole chunks of meat down with gulps of ale.

Their plates were empty by the time the shouting ceased.

Red in the face, Mrs. Gaenor stomped out of the kitchen and came directly to their table. “He says ya got to go.” Bellowing back at the closed kitchen door, she added, “He wants ya out in the Welsh winter, pushing your boy clear to Aberdyfi Inn!”

A patron sitting nearby muttered, “Oooh, Gaenor’s not to have a warm bed tonight.”

His companion nodded. “Nor for a while hence, neither.”

“And that’s the truth on it,” snapped Mrs. Gaenor, eyeing the men. “If you’d a brain between you, you’d warn hisself about meanness to a ma and her wee one three days before Christmas. And especially warn him of displeasin’ a wife what’s carrying his own.”

They shrank in their seats.

“It’s but a mile, woman,” the innkeeper bellowed from the kitchen.

“A mile, he says. Wait here,” she commanded.

A moment later, Mrs. Gaenor returned with what surely must be her husband’s cloak. “Wear it,” she barked, draping it over Babbie’s shoulders. “This night’s too cold for either of you.” 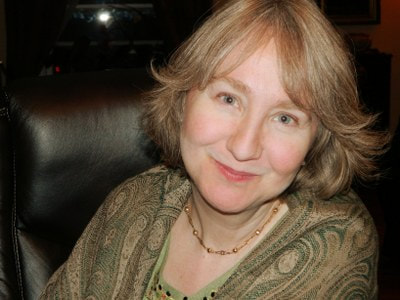 Elf Ahearn was an actress, a journalist, a communications specialist, and the worst mathematician the insurance industry ever experienced. Fortunately, she is now a dedicated kitten mom and the author of “Regency romance with a Gothic twist.” For one brief, shining moment, her first book, A Rogue in Sheep’s Clothing, was #1 in its category on Amazon. Elf lives in New York with her romantic hero and the aforementioned cats. And, in case you were wondering, Elf is her real name… Her parents are interesting people. 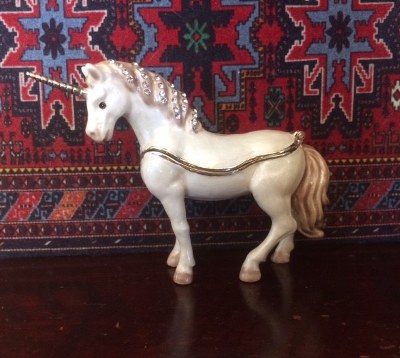 Unicorn Figurine (US only),