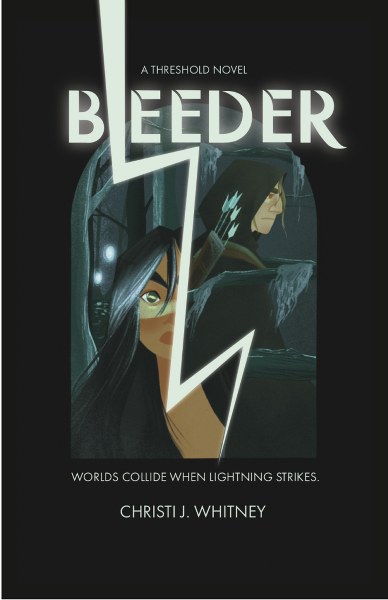 What happens when lightning strikes?

Seventeen-year-old Selene Windell doesn’t remember. But ghosts of her accident haunt her – fragments of memories, deep-rooted fears, and a freakish electrical curse she can’t shake.

Can one lightning strike change everything?

Phoebus, a trained soldier from the dimension of Threshold, knows something threatens his homeland. In one flash of light, a girl from the Otherside sees his face, and he has to act – not only to protect the secrecy of his world, but also to protect himself.

Selene wants answers, and the mysterious new boy in town has them. Phoebus has a duty, and the strange Othersider girl stands in his way.

But will they be able to navigate their dark pasts and unrelenting connection before sinister creatures infiltrate Threshold and destroy far more than Selene’s small coastal town?

Phoebus could see the light.

He’d stood before others just like it—a bluish-white orb, shimmering like a pearl in the midday light. A breeze rustled the trees of the Grove, and their fruit-laden branches creaked in protest. The wind scattered strands of hair across his eyes. He jerked his head to clear them away.

Stepping forward, he flung the fabric of his green cloak behind him and raised his hands toward the light. The metal cuffs at his wrists began to vibrate as a familiar current flowed up his arms. His insides reacted to the surge as well; his entire body hummed with the fiery sensation.

He paused, allowing the energy to scorch through him like a pleasant burn. The back of his neck buzzed, enveloping him with a lightheaded aura—something that felt as natural to him as his own skin.

Reaching out, he traced the pattern of the glowing orb as it hung suspended in midair—its form not solid, yet distinct. Energy crackled as the light pulsed against his fingertips. It left a metallic taste on his tongue, and he savored the flavor, like a spoonful of rich honey.

His fingers stirred the energy, like water on the surface of a lake, as he checked for signs of instabilities or inconsistencies. The Electricus radiating from the orb felt...off. A nagging sensation was beginning to nip at the corner of his mind.

He ignored the voice behind him, his attention locked on the light, which pulsed like a beating heart. But there was an erratic skip in the rhythm. A slight flaw, easily missed by someone else. But not him.

Narrowing his eyes to bring the orb into sharper focus, he waited for another glitch. But the pattern remained consistent. As he lowered his hands, the energy dissipated from his skin—a current, slightly disrupted. Nothing else seemed out of the ordinary, but the nagging in his gut remained.

He met eyes with Titus, who was leaning against a tree trunk, with his long, tanned arms crossed over his chest and his longer legs crossed at the ankles. Titus was studying him through strands of untamed curls the wind had whipped across his forehead.

Phoebus felt a muscle jerk in his jaw. The light was nothing more than a Rift—a damaged section of the Barrier that protected their homeland. The Electricus powering the invisible shield had weakened and needed their attention.

But that wasn’t the cause of his uneasiness.

He ignored Titus’ drawn-out sigh. He wasn’t ready to share anything more. Not yet. The glitch could mean many things, and most of them were nothing to worry about.

“It’s just a Rift,” said another voice from his opposite side. Nyx brushed past them, tossing her dark braid over her shoulder. “No reason to keep thinking. Let’s finish this and go home.”

Pushing aside her cloak, Nyx withdrew her a gleaming nadala—the spear-like tool used to repair the Barrier. Like many Rover weapons, it was made of solid amber—a perfect conduit for Electricus.

“Better watch yourself,” said Titus. “You don’t want to end up like Yenna.”

Nyx rounded on him. “You think I’d be so foolish as to sew my own hand into the Barrier, and give myself a trip to the infirmary?”

Her dark eyes glinted challengingly. “Or are you implying that I have the skills of a novice?”

Titus’ hands rose in surrender. “Of course not.”

“Good. Now, stand aside and let me work.”

As Phoebus watched his Trinemates, he dismissed the wary feeling in his stomach. He was probably overthinking things. Training the young novices over the last several weeks had mentally drained him—nothing a good night’s rest couldn’t cure.

“By all means, Nyx, go right ahead,” Phoebus said, moving aside with a sweep of his arm. “After all, who am I to argue with a lady?”

She arched her brow. “No one of importance, obviously.” “That hurt.”

“No, it didn’t,” she replied, looking him over. “Your skin’s thicker than my boot soles.”
Phoebus allowed himself a smile. Nyx always matched his wit—one of the things he liked about her. She moved with a confident stride and paused in front of the light. As she turned the nadala in her hands, he nodded his permission. She was well-trained in the process of mending the invisible membrane of the Barrier.

Better than anyone he knew.

A comfortable silence fell between them, resting in the knowledge that, despite the danger, this was standard procedure. They were Rovers. The Barrier was their responsibility.

Titus located Rifts. Nyx sewed them up. And he took care of everything else. Another task to complete. And then, it would be back to the Keep for dinner and a tall mug of Hythelberry cider. His stomach rumbled at the thought.

The spear glowed blue as the amber drew Electricus from Nyx’s body, like a magnet attracting fragments of metal. She positioned it at the edge of the Rift, as though the light were simply a piece of fabric and not a deadly concentration of energy. As she pierced the shimmering border with the nadala’s sharp point, the orb shuddered violently, like some living thing.

“In all seriousness, Fee,” said Titus, lowering his voice as he glanced around the meadow, “there’s something else going on here, isn’t there?”

“What makes you say that?”

“I’m sensing an unusual level of weakness in the Barrier,”

Titus replied. “I don’t know how, but it feels like it’s happening on both sides at the same time.” He frowned heavily. “So no evading the question this time, Fee. What’s going on?”

Inhaling slowly, Phoebus surveyed the Grove. The area was vast, populated with trees in perfect rows. In one direction, they led to the front gates of the city. In the other, they extended to the rolling hills beyond. Bushes, ripe with fruit, hugged the stone paths.

All of it was safely nestled within the confines of the Barrier.

Without that shield, his world was vulnerable. And it was his duty to make sure that never happened. Rubbing the metal cuff on his wrist, he felt it vibrating with the orb’s energy. The indigo sky flashed with lighting, and his chest rattled with an ominous sound. Thunder. The tops of the trees bent under a sudden gust of air. But this wasn’t natural, and the rumbling had nothing to do with the wind.

The sensation pierced him, plunging deep into the marrow of his bones—a fierce, erratic concentration of Electricus in the air.

The discharge of energy hit him like a shock.

An unnerving awareness seized hold of him, crowding out the chill. He felt as though he were being...watched. Fighting against the electrical charge inside him, he peered into the light. There was someone was on the other side of the Rift.

She was staring straight back at him.

Phoebus was rooted to the spot, unable to look away. He saw fear in the eyes—a girl’s eyes, a striking shade of hazel, too wide for her face. Every dark freckle spattering her cheeks, every poufy strand of windswept hair, every drop of rain on her brown skin—he saw the details as sharp as glass. Then a horrible, chilling realization struck him like whip.

She could see him.

The atmosphere crackled. Purple storm clouds swirled above him, but he couldn’t take his eyes from the girl. The ground vibrated under his feet, and the trees wailed in the wind.

The Rift had to be closed. Now. 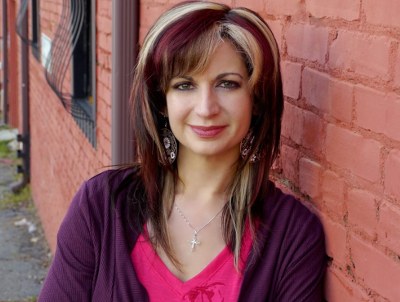 Christi J. Whitney is a former high school theatre director with a weakness for sci-fi/fantasy conventions and superhero films. She loves a hot cup of coffee, a plate of sushi, and a good book—though not necessarily in that order.

Christi is the author of the YA fantasy series The Romany Outcasts, which includes the novels Grey, Shadow, and Midnight (published with HarperCollinsUK). Christi lives outside of Atlanta with her husband and two sons. When not spending time with family or taking a ridiculous number of trips to Walt Disney World, Christi can be found directing plays for the theatre, making costumes for both stage and cosplay, geeking out over Doctor Who, defending the house of green and silver, and always pretending she’s a tad bit British.