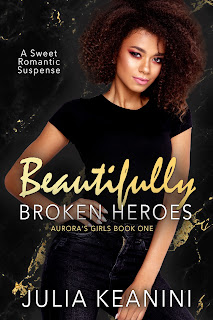 Beautifully Broken Heroes
Aurora’s Girls
Book One
Julia Keanini
Genre: Sweet Romantic Suspense
Publisher: Pickled Plum Publishing
Date of Publication: 12/21/2021
ISBN: 979-8784847072
ASIN: B09KL9FC2M
Number of pages: 184
Word Count: 49,788
Cover Artist: Steven Novak
Tagline: We were broken, every part of us. But that makes us the very best at what we do. Making sure that no other woman or child suffers in the way that we have.
Book Description:
We were broken, every last one of us. I lost my cousin to a brutal murder when I was just eleven. Nadia was emotionally battered and bruised until she was just a shell of her formerly confident self. Ella joined the military to change the world, but unknowingly left her sister behind in the clutches of a monster. And Shai was nearly beaten to death by the man who had vowed to love and protect her.
Maybe we still are broken, at least a little. But it’s because of our scars, not despite them, that we’re able to find and rescue others like us. Others who are still being broken, used as punching bags by loved ones, sold as nothing more than objects, or kept against their will.
I’ve trained for this since I was a child and now I’m putting that training into practice, knowing I can beat up any perpetrator, save any victim, with my bare hands. Nadia hasn’t come across a legal conundrum that she can’t solve and while we try to stay on the right side of the law, sometimes we have to bend the rules to save a life. So Nadia makes sure we never get in trouble for doing the right thing. Ella can talk an elephant into flying, and her skills have wrung confessions out of hardened criminals. And Shai . . . well, Shai is lethal. No man will leave her in a pool of her own blood again.
But because we’re so focused on our mission, the rest of life can get a little messy. Like relationships. I’m kind of in love with my best friend and he has no idea. He’s the only man in my life who hasn’t been intimidated by my strength, and part of me wonders if he’s actually attracted to it. But that relationship is going nowhere since I have a hard time admitting my feelings even to myself. Then Shai has a hot thing going with the police officer who saved her life, but since she refuses to acknowledge it, her love life has stalled before it had a chance. And don’t get me started on Ella and Nadia. Those women attract men every moment of every day, but won’t give any of them a second glance. But we’ll figure it out. The way we do with everything.
We are a team of the world’s most elite warriors, women seeking salvation and redemption for those who can’t do it themselves and holding their abusers accountable. And thanks to our boss, Susie, we’re backed by billions to carry out our work. The criminals of the world won’t know what hit them. Because we are Aurora’s Girls.
Amazon

A man who preyed on women when they were alone: that’s who we were looking for. The women always sat at the bar, where he'd approach them, manage to gain their trust, and then lead them elsewhere to turn from Prince Charming into their worst nightmare.
Knowing that a man capable of such deplorable acts probably stood within a couple dozen feet of me sent shivers up my spine even though I was far from cold in that hot club with my leather jacket. Unlike Shai, who wore a dress that displayed her sleeves of tattoos, I was covered up, especially for a club. I wasn't averse to dressing up, but it felt strange to wear a little black dress my first day at a new job. And how did one fight in a dress? I was sure Shai had it all down, but I preferred my jeans, white tank, and jacket, thank you very much. In that ensemble I was certain I could hold my own . . . and then some.

If there was one thing I knew, it was how to fight. My first self-defense course started the summer I turned ten. It was a few months after my cousin had been murdered by her ex-boyfriend. My mom, and especially my aunt, thought it was imperative that I know how to protect myself in any situation, even if someone came at me with a gun like the man who'd taken my cousin from me.

So to that one summer of classes was added karate and then jiu-jitsu. Soon I had a black belt in several different types of martial arts, and then I turned my attention to boxing. Some have said we Andersons have an unhealthy obsession with training and mastering fighting techniques. But those people weren't awakened one spring morning by their aunt’s screams of terror upon finding out that her only daughter had been murdered just days before her twenty-first birthday.

"We need to move," Shai said in a low voice, taking one of my leather-clad arms and leading me to the dance floor.

I stood awkwardly for a moment before I realized why we were now on the dance floor. We were supposed to dance. So we did. Shai was relaxed, just swaying side to side, but I couldn't dance half-heartedly. The song was one of my favorites so I had to vibe with it. My moves wouldn't make me TikTok famous or anything, but I wasn't bad, if I did say so myself.

"Is Ella okay?" I asked, leaning down to yell in Shai's ear.

We made quite the pair. At five-nine, I was all lean limbs. I'd inherited my height from my father along with my light mocha skin, but what my sisters liked to call light brownde hair and green eyes were all my mom.

And then there was Shai. Tiny, tattooed Shai with her long brown hair pulled back in her signature ponytail, her dark eyes carefully scanning everything around us even as my thoughts continued to wander.

Why was it so hard for me to focus? Probably because it felt like nothing was happening. After years of training, I was ready for action. I was sure it would become easy as soon as our target approached Ella, but for now I really needed to get my head back in the game. Again.

Thankfully I'd been looking at her so I didn't miss her message.

Aunt Susie had warned me that working with Shai would mean needing to practically read her mind. Shai didn't train people. She didn't have the time or patience for it. So if I wanted to work with Shai, I needed to guide myself. Of course I'd already been through months of Aurora training, but I'd have no training on the job. I figured that was a fair trade for working with the best in the business.

There were dozens of other teams Aunt Susie could have placed me on, but I thanked my lucky stars I was right where I was. I'd already learned so much and I was only half an hour into my first job.

The dance floor was packed but Shai and I had carved out a little space for ourselves, so I was taken aback to see a guy suddenly encroaching on that space. He approached from behind Shai, his intent apparent by the way his eyes bored into her butt. He looked back at his friends, laughing and pretending to grope Shai's bottom. I was about to warn her or tell the guy off, but never got the chance.

Somehow sensing his approach, Shai spun toward the guy and his eyes widened. From my position behind her I couldn’t see her face, but the look she gave the coward sent him scurrying away immediately.

I bit back a chuckle as Shai turned back to me and resumed her indifferent pretense at dancing. I didn't know her well yet, but doubted she would have appreciated my laughter. And I definitely didn't want to get whatever treatment she'd just given Mr. Gropey. 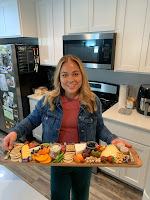 About the Author:
Julia Keanini is just a city girl living in a country world (and secretly loving it). She loves the mountains and would adore the beach, if it weren't for all the sand and salt (wait, that is the beach?). A good book, a great song, or a huge piece of chocolate can lift her mood, but her true happiness is found in her little fam. She writes about girls who deal with what life throws at them and always about love, cause she LOVES love.
Newsletter: http://eepurl.com/bf4p3j
Facebook: https://www.facebook.com/JuliaKeanini
Instagram: https://www.instagram.com/authorjuliakeanini/
Amazon: https://www.amazon.com/Julia-Keanini/e/B00U9NB002/
Goodreads: https://www.goodreads.com/author/list/13575845.Julia_Keanini 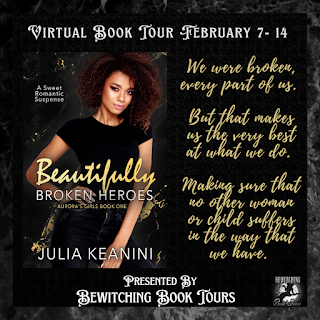