✱✱Book Review✱✱ A Deadly Bone to Pick by Peggy Rothschild 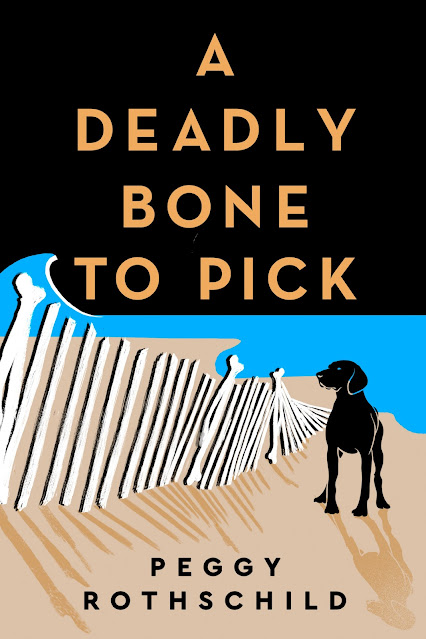 When Molly Madison, dog-wrangler extraordinaire, stumbles upon a murder in her new hometown, she must track down a killer to save the day.

Ex-police officer and former private investigator Molly Madison is starting over. After the death of her husband, she and her golden retriever, Harlow, move cross-country to California. But as charming and peaceful as the beachside town seems, she soon learns its tranquil tides hold dark secrets.

On her first day in the new house, a large, slobbering Saint Berdoodle wanders in. Molly winds up taking on the responsibility of training Noodle since his owner is too busy to do the job. During one of their daily beachside walks, Noodle digs up a severed hand. Once Molly alerts the police and they run a background check on her, an incident from her past makes her an immediate suspect—after all, Noodle’s testimony to clear her name won’t hold much water in court.

To prove her innocence, Molly must rely on instincts keener than a canine’s to sniff out the real killer. But when Molly’s life is put in danger, will her two very loyal pups be able to rescue her?

Momma Says: 4 stars⭐⭐⭐⭐
I went into this one a little bit wary. Certain things about the title and blurb made me think cozy mystery and others made me think not so cozy mystery. I do occasionally read cozy mysteries, but I prefer a little more grit in my suspense, so I wasn't sure how this one was gonna go. And in the end, I feel like it's somewhere in the middle. It's not quite as Hallmark-like as most cozies but it's not completely gritty either. Whatever the label, I enjoyed meeting Molly and company, including the dogs, and the mystery was entertaining and intriguing. This is the first in a new series, so we get some intro here to both the characters and the setting. With that, it takes a little bit for the mystery to take off, but I enjoyed the setting and introductions almost as much as the suspense. So, we get a new character to follow in what promises to be an engaging series. Based on what I've found in A Deadly Bone to Pick, I'll be interested to see what happens next in Molly Madison's world of sun, dogs, and murder.

Peggy Rothschild is a member of Sisters in Crime International and her local Los Angeles chapter. Her short stories have been published in the anthologies The Best Laid Plans and Heartbreaks and Half-Truths, and she recently illustrated the children’s book Angie’s Great Big Beautiful Life: Tales of Angie the Rescue Cat. Learn more online at peggyrothschildauthor.com.
at February 25, 2022