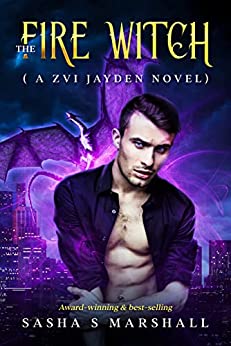 She just wants to catch a killer, but he wants to capture her heart.A killer vampire is on the loose, and the vampire king wants my help tracking him down. I don’t blame him. It’s my job as a bounty hunter to chase criminals, and I’m good at it, much to the dismay of his vampire subjects.Teaming up with the enemy is the last thing I’d normally do, but when Killian claims I’m his girlfriend in order to save me from his evil master, I have no choice but to repay the favor.What I don’t count on is how persistent the sexy ruler will be in his efforts to win my heart, nor how hard he’ll be to resist when he tries to change the rules on our fake relationship.Will I be able to keep from crossing the line with him so I can catch the murderer before it’s too late? Or will my heart become another vampire casualty?Can the vampire king light a fire in the bounty hunter’s heart?

Momma Says: 4 stars⭐⭐⭐⭐
The Fire Witch is a mile-a-minute urban fantasy that doesn't let up. It's like one of those movies where you know if you blink, you'll miss something, and you really don't want to miss anything. This was my first read by Sasha Marshall, and she knocked it out of the park. I love the genre, but I'm really picky about it. This one gives me pretty much everything I could ask for. A snarky, full of sass heroine, a sexy love interest, and a whole passel of secondary characters who are just as interesting as our heroine and hero. Zvi is strong and determined, and I love her sharp wit. We get a bunch of different supernatural beings, from shifters to vampires to witches, and I enjoyed the many differences between them and how they interacted. The only drawback for me is the world-building - well, maybe the shortfall on world-building. On one hand, what world-building we get is done organically throughout the story, which is a big plus for me. On the other hand, the details come up short on some points. There is a bit of a cliffy, and the likelihood of another book may account for the shortfall of world-building, so that's something to be considered. One of my favorite elements here is the feeling of a found family. I won't go too far into that to avoid spoilers, but I love how close some of these characters are whether they have a blood connection or not. All things considered, The Fire Witch is a fast-paced, entertaining read, and I'll be interested to see what's next for Zvi and company.